Bitcoin Is Still Your Liferaft!

return to the blog
There are now 70 cargo ships off the coast of California unable to offload food and supplies.  Labor shortages are being blamed.  Below is a picture of shelves in the UK, which are bare.  Also blaming labor shortages in the UK for this: 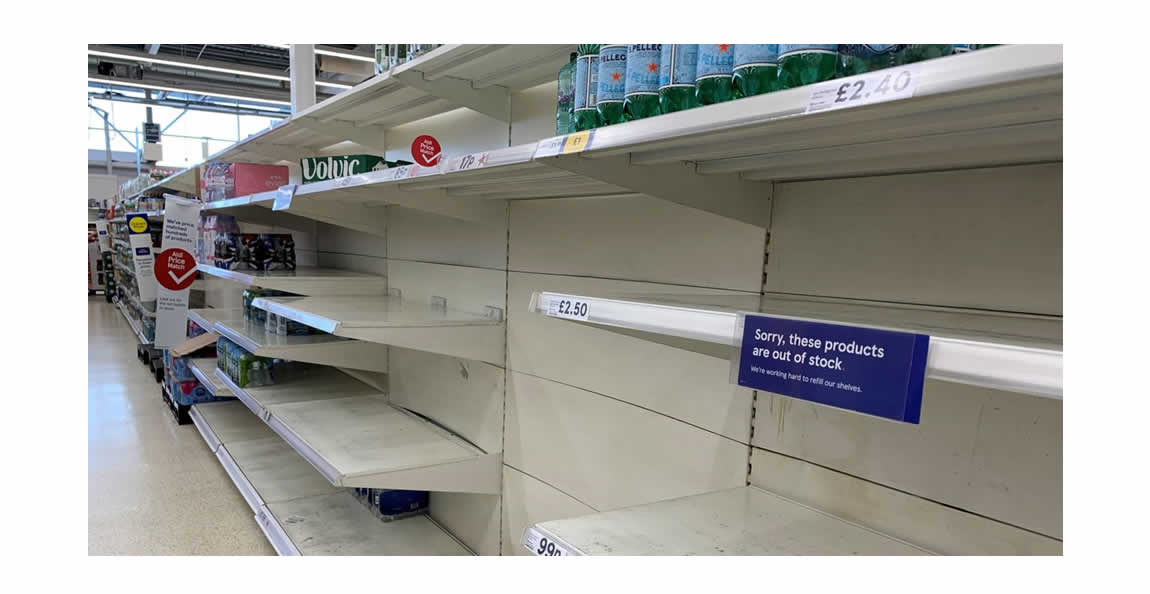 The Chinese government owns 8 US ports including the port of Long Beach.  They now own major ports world wide.  World’s largest owner of shipping ports, due to the belt and road initiative.  They have monopolized trade routes, especially the maritime silk road trade route.  (Closer to the equator, where most trade is done globally).  Now, food shortages are cropping up, and the 70 cargo ships and climbing, cannot offload in the US, west coast ports.
China Evergrande has not been bailed out so far, and the shockwaves from that potential $500 billion bankruptcy have not begun to ripple throughout global markets yet.
There are immigration crisis, bankruptcy crisis, food shortage crisis, geo political crisis all hitting global markets and many countries in a real way, and all at the same time!  China’s debt to GDP ratio is 323%.  Highest in the world.  US by comparison is 126%.  India is 184%.  If China Evergrande is NOT bailed out, it seems certain that a sell off cascade, will be set off at some point.  This could be labeled a deflationary crash.  Also, consider what will happen if the US infrastructure bill is passed over the next two weeks.  It sounds like it will be smaller than the original $3.5 trillion planned.  Whatever happens on that bill, it could come close to doubling the $4 trillion, already spent on stimulus in the last 18 months.  The US has now printed 40% of the broad money supply in the last 18 months.  Inflation and a deflationary crash are both right in front of us!
Every Neutral ATM blog states this as a reminder regarding Bitcoin’s premise:
“Bitcoin is getting investors scarcity, decentralization, and security during a decade of rampant money supply inflation, totalitarian central control, and security hacks!”
As long as the investor owns their own Bitcoin keys, their Bitcoin is secure.  We suggest cold card or trezor wallets to store Bitcoin offline.
One thing is for sure, monetary devaluation will continue.  When goods and services are priced in USD, they will look much more expensive because of this.  As we have mentioned in past blogs, high tech industries are very deflationary.  They force governments to print more currency.  Technology advances, and those goods get less expensive; deflationary.  This leads to the reverse repo market climbing to $1.24 trillion per day (as of 9/20/21), in the US.  Commercial Banks have so much currency sloshing around, that they have to repossess treasuries from the Fed, to hold the Fed’s predetermined rate targets.   See this notice from Monday from the Federal Reserve Bank of New York: 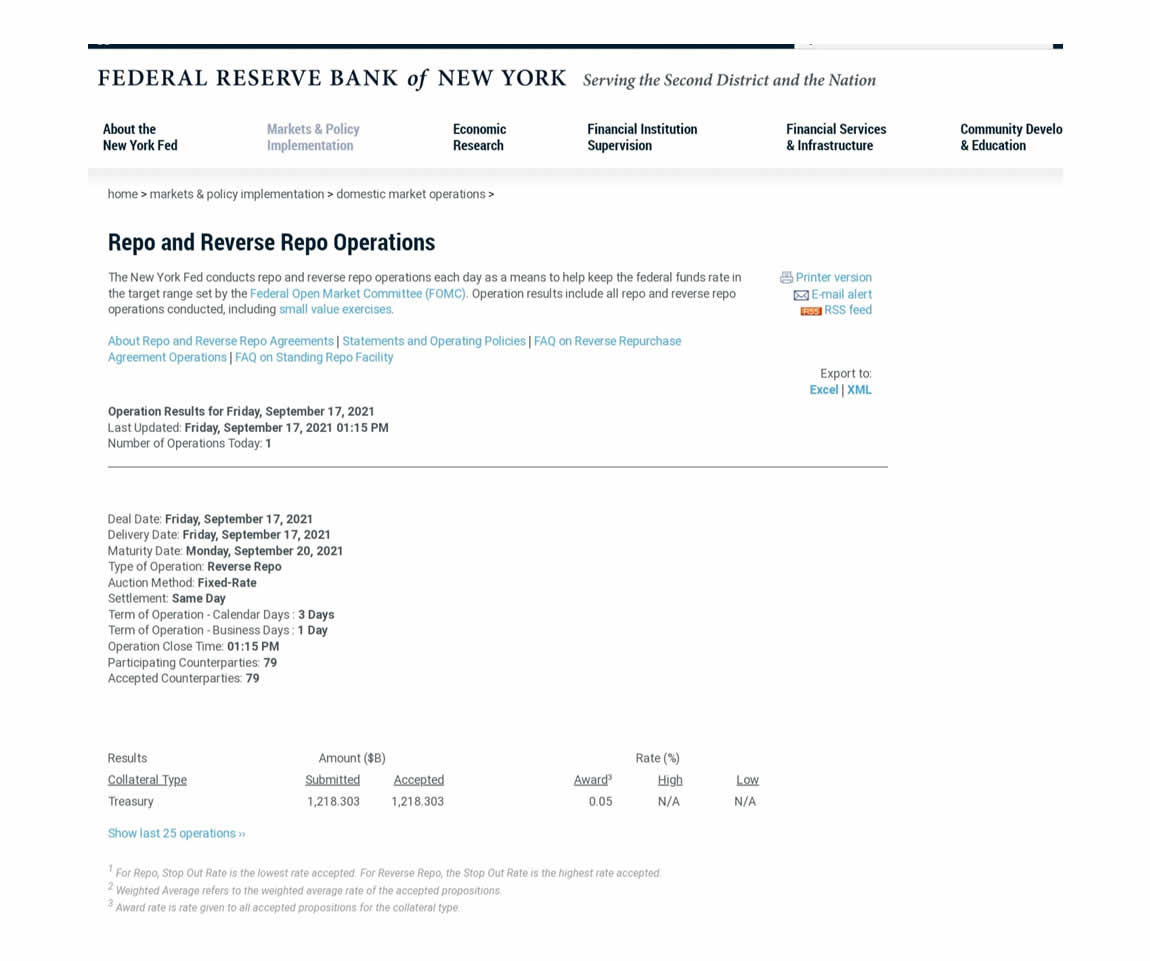 So, deflationary high tech industries exploding in the US over several decades, has led to a high need for capital liquidity in the banking sector.  Keeping rates low, has been deemed paramount, by the Fed.  This is how they kick the can down the road.  Low rates, devaluate the currency, keep borrowing and spending.  Another way to say this, is yield curve control.  Deflationary high tech markets eventually require more yield curve control and more central bank intervention in the monetary system.  So, even though high tech industries are deflationary, central bank intervention to control the yield curve (treasury bond yields) is inflationary.  It’s the response to the high tech industries in the US that causes this inflation.  That and the fact that the USD is the global reserve currency.  Also, keep in mind.  Afghanistan did no favors to the US economy.  The petro dollar system whereby, since 1974, the US has protected Saudi Arabia militarily in exchange for them selling their oil for US Dollars.  Has that not changed recently, due to US weakness displayed when leaving Afghanistan?  Saudi Arabia is negotiating a new deal with Russia.  Will that lead to Saudi selling their oil for Rubles instead of USD?  There is now reason to question the sustainability of USD global reserve currency status.  This whole wind down process, of the legacy monetary system is being drastically sped up right before our eyes!  Many factors play in to this.  However, change is coming to the monetary system.  Devaluation of currencies, globally.  Food supply shortages.  What is the end goal?
CBDC (central bank digital currency) will be the goal of the globalists.  It gives the G20 countries who push globalism more control:
How does Bitcoin play in to this?
Buy Bitcoin, get further away from Urban downtown areas.  Try to weather this storm.  It will eventually come to an end.  We cannot predict what that will be.  Just that Bitcoin is the most secure, scarce, decentralized asset you can own.  Hedge central banks, buy Bitcoin!
Neutral ATM buys and sells Bitcoin as little as $20 at a time!  You do NOT have to buy an entire Bitcoin.  Neutral ATM is here to get everyone off of zero Bitcoin.