Bitcoin is Leading the Digitization of Money

The below chart shows us that money moving from analog to digital is just starting.  Nobody knows how it all ends up.  See the chart below:

What we do know is that Bitcoin is the worlds first peer to peer digital currency that is totally decentralized and provably scarce.  Every Bitcoin can be accounted for at any time, very important to remember.  So how likely is it that a central bank digital currency (CBDC) becomes the global reserve currency?  We don’t know at this time.  If CBDC is the future or a basket of CBDC’s, how will that relate to Bitcoin in the next 10 years?  Bitcoin is scarce and decentralized.  CBDC is neither, if central banks create digital currencies and a basket of them become the global reserve currency instead of Bitcoin, will it still survive?  We say it does because as technology increases deflation increases, and as deflation increases, currencies will be printed, money supply will grow to keep up.  High money supply benefits a scarce asset like Bitcoin, not to mention it is decentralized and borderless.  The Bitcoin network effect, which has shown all time historically high upside growth, will only get better as the global economy gets more and more deflationary.  Think of computers or televisions or even cell phones.  They keep getting cheaper as technology improves.  Same thing for electric cars and the automotive and travel industries.  As real products that are technical, get cheaper, that leads to deflation.  Raising money supply, even digital currency, will allow more money to spend on research and development of these technologies.  Central banks around the world are currently fighting deflation by debasing their currencies and controlling interest rates. Currency is therefore, being debased, long term.  It loses value over time.  Currency weakness will lead to strength for Bitcoin and even Ethereum as well.

The next graph shows how supply of Bitcoin held on exachanges dropping off, helps scarcity and increases the Bitcoin price: 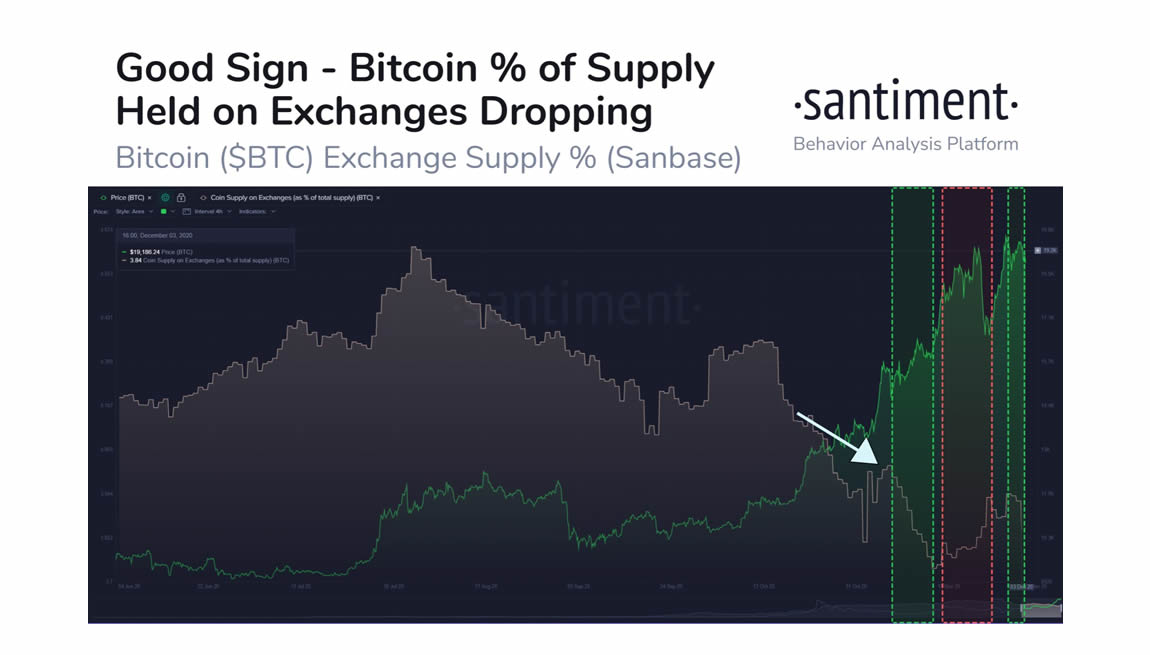 Bitcoin coming off of exchanges so it can be stored long term and held, leads to a supply shortage, scarcity.  This scarcity is not changing anytime soon.  Bitcoin may very well be overdue for a larger pullback, but longterm, this bull run is far from over.  Neutral ATM is long Bitcoin, and we do hold more Ethereum than we did a few months ago.  We are long both of these cryptocurrencies.  Etheruem came out with its 2.0 version recently, and now Visa will be building on the Etheruem platform for digital payment systems.  Bitcoin is the store of value, Ethereum is the mode of exchange.  They each have differing strengths.  Bitcoin is still king, remember that as well.

A growing number of publicly traded companies are now holding Bitcoin as a % of their cash reserves.  In early October this totaled $5.5 Billion in value.  Now that number has tripled.  Network effect, demand growing on itself for multiple reasons, leading to more demand: 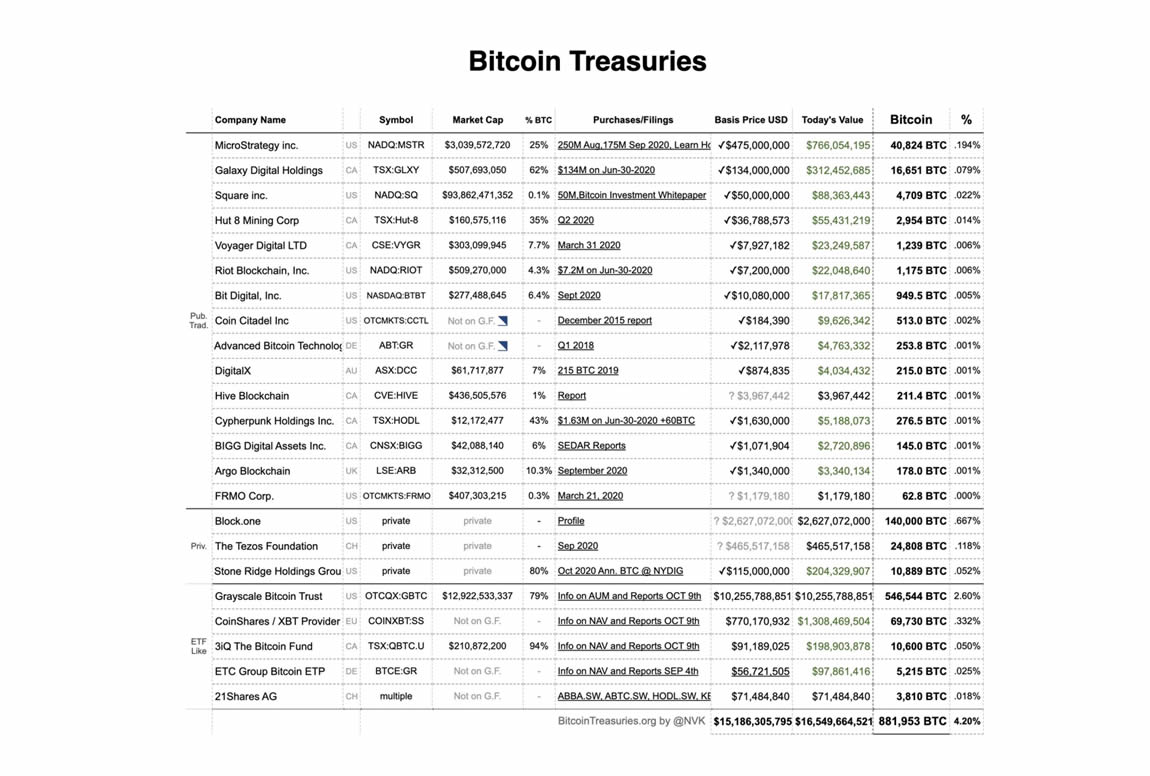 The primary reason so many publicly traded companies are trading US Dollars for Bitcoin, is the fed policy in response to Covid 19, and going back to the late 2000 tech bubble, has been to control the yield curve and print USD!  See this chart on money supply: 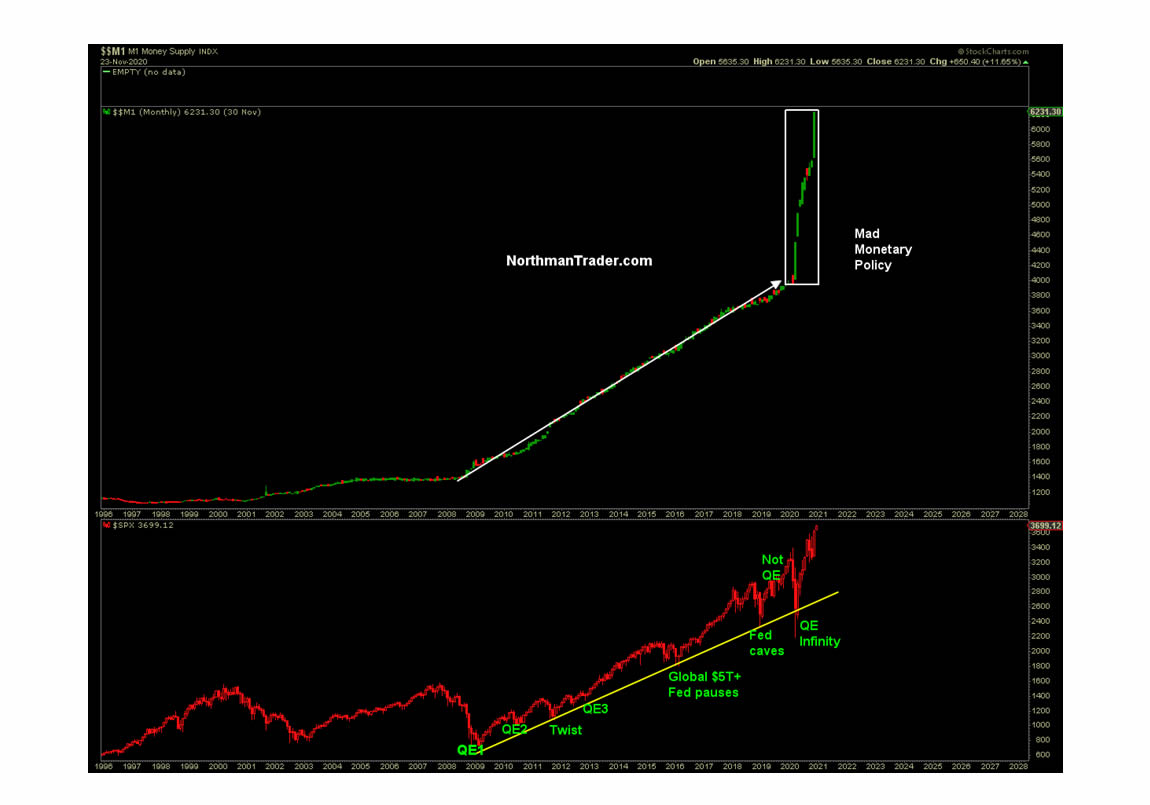