Bitcoin is forming a good bottom, what’s next?

On this blog we have, for several weeks, said the only scarce assets that are in good shape right now (as investments) are Gold, Silver, and Bitcoin.  Land and Art are never bad if the invester has done the research, and knows what they are buying.  However, due to scarcity Gold, Silver, and Bitcoin stand above other assets, especially Crypto Currencies and Equities!  Bitcoin and Crypto are separate.  They are not the same, as we re-iterate weekly.  Bitcoin has no owner, or board of directors.  The Bitcoin blockchain is controlled by the miners and node operators of Bitcoin who maintain the protocol globally.  There are millions of individuals doing this in over 200 countries.  Therefore, no central bank or government can mandate any change to Bitcoin from the outside.  Every other Crypto Currency is centralized and mandates from the outside could effect them.  Most if not all Crypto Currency outside of Bitcoin is an unregistered security!  This means the SEC could shut them down in the US and criple them.  Bitcoin is property, not a security, because it is not centrally owned by anyone.  Just like real estate, Gold, and Silver.  Since there is no central controller of Bitcoin, it truly is decentralized.  No mandate in any country, or central bank can shut down Bitcoin!  CBDC, Fiat currency are the opposite of that.  They are centrally controlled.  This gives the owner of a Bitcoin, stored offline true sovereignty over their asset.  Since the miner reward is cut in half every 210,000 blocks, and a block is added to the blockchain every 10 minutes (thus, tik tok next block).  Bitcoin recovers from every bear market, like clockwork.  See 2014, 2018, and 2022 as examples.  Then look at what Bitcoin did the three years after these bear market years.  We are bullish for the second half of 2023 and all of 2024!

Let’s start with charts of Silver and Gold that appear bullish, but not to the extent of Bitcoin.  Silver has been in a long term wedge pattern it can eventually break out of.  However, one has to know how to buy Silver from a dealer that is not charging really high fees.  There is a lack of consistency in the fees, and one must buy physical Silver not an ETF.  Here is the chart below: 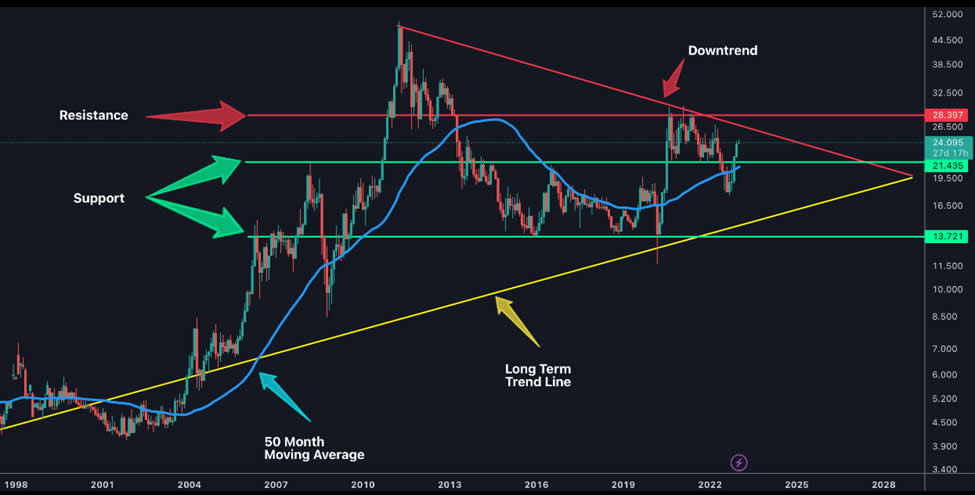 Gold also looks strong, and when inflation picks back up when oil prices start climbing later in 2023.  This being because of the lack of a strategic petroleum reserve anymore.  Only 19 days of petroleum reserve storage is left as of last week!  This is still dropping lower weekly!  This will drive oil up, which drives up all inflation.  As that happens, Gold will turn more bullish.  This has already started, as Gold is well above the 80 month moving average, and looking at $2,000/ oz as a future target!  Inflation is not tamed, it is coming!  Below is the Gold chart: 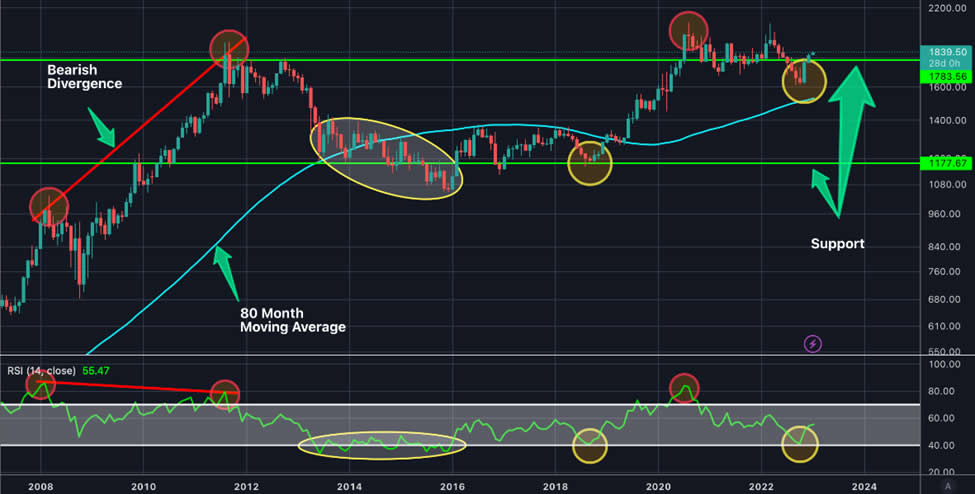 Bitcoin already had the MACD cross last month.  Steve Courtney got his Christmas wish.  The MACD cross has happened during each of the four bear markets of Bitcoin.  Months after this cross, Bitcoin has always gone on a bull run of varying heights. Here is the chart:

Now, in January, Bitcoin just printed a color change from red to green in this chart below.  This has happened four times in Bitcoins history.  Every time it turns the price action bullish….eventually:

Even more rare than that, in this color chart below, Bitcoin just printed a double buy which last happened, the only other time in Bitcoin history, in 2012.  Almost 11 years ago.  These indicators point to the fact that Bitcoin is performing a shift in direction.  It has been bearish for 13 months now.  It may stay sideways, or dip one last time, but eventually, the shift will be bullish.  It’s a matter of time now.  Here is the color chart with the double buy that just printed:

Another indicator is that miners have stopped selling their Bitcoin.  Miner net position has turned green, from red on this chart below: 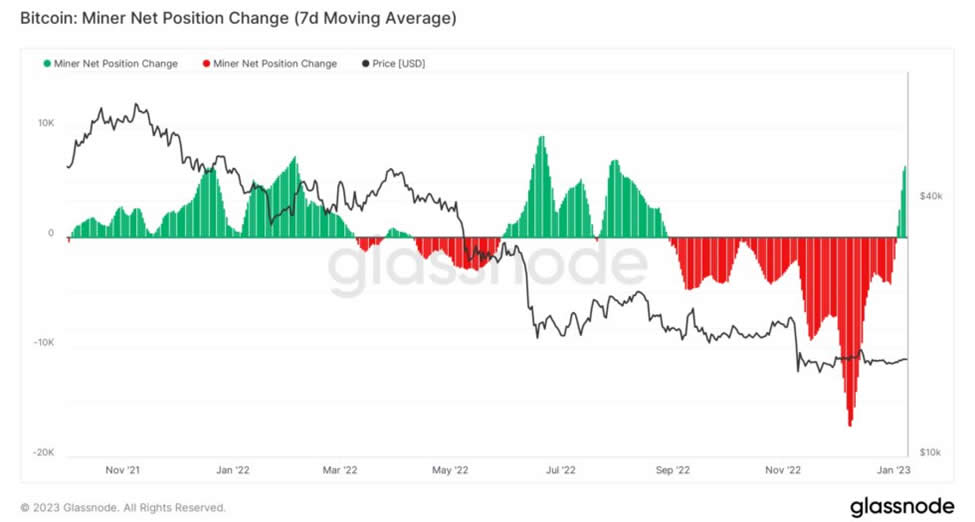 Bitcoin really is rhythmic and cyclical.  We truly thought in 2021, Bitcoin would reach $130k.  We now believe it did not do that, because of the lack of a spot ETF being approved by the SEC, plus out of control manipulation going on in exchanges like Celcius and FTX.  At least in the case of FTX, they were selling investors Bitcoin, that they did not even have.  Fake, paper Bitcoin.  It created falsified, corrupt supply to the supply demand balance that determines the Bitcoin price.  They are out, so may be Celcius Network.  Keep in mind, Celcius was allowed to keep $4.2 billion of investor deposits to pay back its debtors amid it’s liquidity crisis.  They attracted these investmens by re-hypothecating investors Bitcoin in exchange for high % returns.  Now those investors are out a cumulative $4.2 billion.  Thus, as we say not your keys, not your coins.  Keep ALL Bitcoin saved OFFLINE!  We recommend:

As for the rhythm of Bitcoin, it’s always been one red year, then three green years.  2023 will be the first green year.  We cannot say when price action will really turn, but it will be in 2023.  See this chart below: 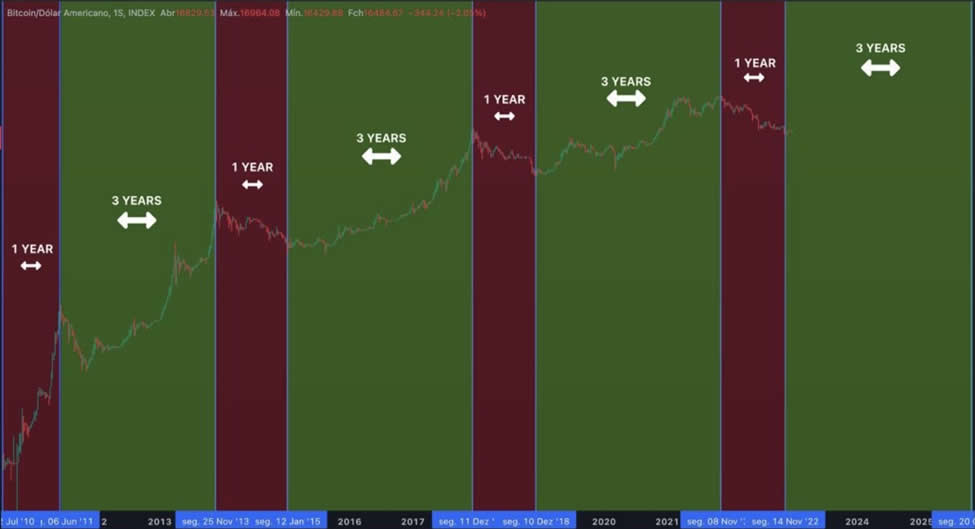 Equities will have a hard time and many Crypto Currencies as well.  Some will likely succeed, they still.  They are centralized and left vulnerable.  Neutral ATM is Bitcoin only, this position is fortified after what we have seen in 2022!  Fortified, never to be changed!  Invest in it while it is still cheap, save it offline, rinse, repeat.  We are not financial advisors and this is not financial advise.  Bitcoin is a technology with the power to change the way global monetary systems work.  Watch.  The future is changing, what we have today, we will not have in the future.  To say fiat currency will reign forever, is ignoring technology.  It’s like saying computers would never change humanity!