Bitcoin is Eating the US Dollar & Gold

Below is another graph showing M1 Money Supply.  Notice how it really spiked when Covid 19 began early this year:

There are zero signs that money supply will be leveling off anytime soon.  If Janet Yellen is approved as Treasury Secretary this issue will likely get much worse.  That would also mean Biden as president.

Now look at the yearly candlestick charts of Bitcoin.  Watch for the pattern of bull market year, after the halving occurs.  Followed by a bear market year, then two accumulation years.  2021 will be the bull market year for Bitcoin.  Next time we see this will be 2025.  The next halving will be in early 2024: 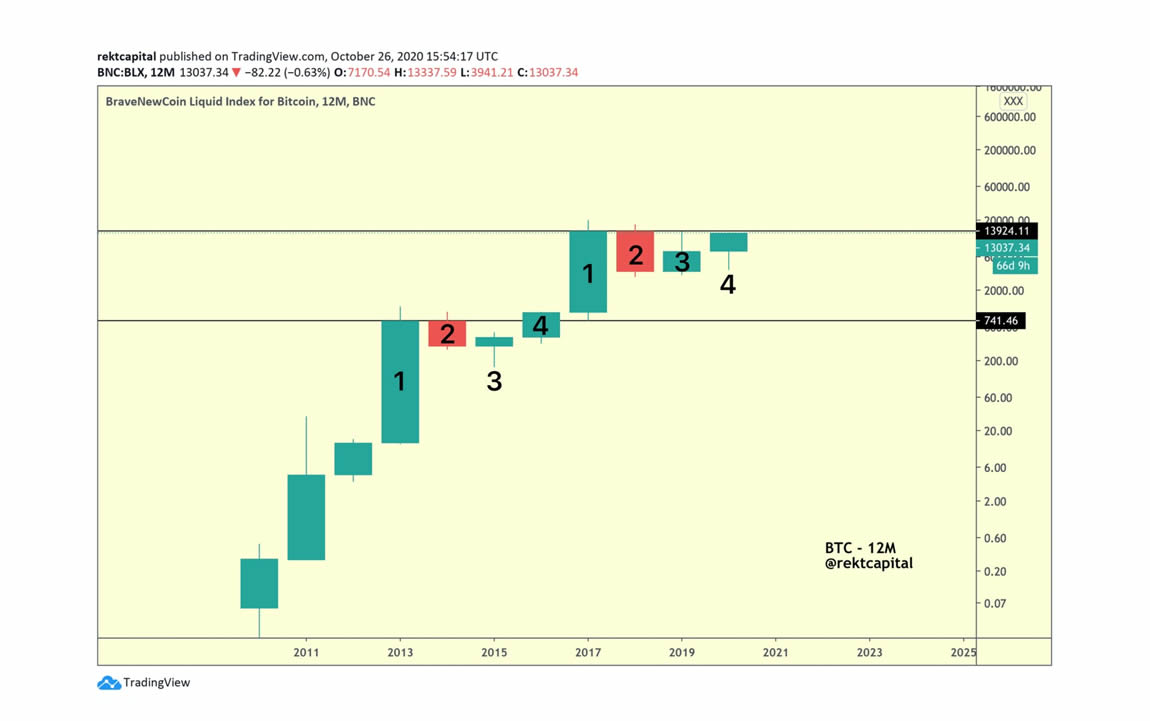 Obviously, Bitcoin operates in patterns.  We call them seasons (Summer, Fall, Winter, Spring).  2020 was Spring, 2021 will be Summer.  At least that gives you a way to think of the pattern.  Based on the above chart Bitcoin should get to the $180K to $220K or higher level in late 2021.  We think the cycles are lengthening a little as Bitcoin matures, therefore, the bull market could last into early 2022.  We will write a lot about where we are in the cycle as that time period gets closer.  It is too far away now.

Below the next chart shows how Bitcoin has reached the previous all time high (ATH) while Gold investors are selling Gold to buy Bitcoin: 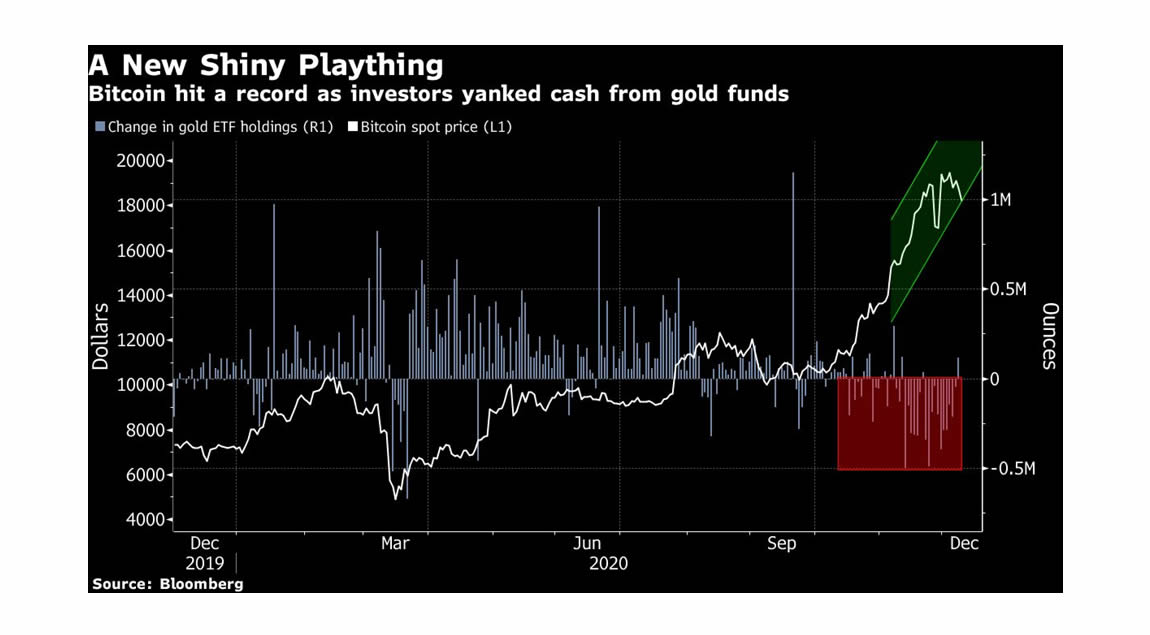 Notice the red square in the bottom right side of the chart.  Gold investors sold off since October.  That is when Bitcoin broke out of the 3 year symmetrical triangle pattern it had formed since the previous ATH.  Although Neutral ATM owns Gold, we have been selling some of it in November and December to buy Bitcoin.  See the next chart comparing Bitcoin returns to Gold and DJIA in 2020:

Some of you saw the picture we posted 5 weeks ago of a $Billion of Gold next to $Billion of Bitcoin.  The Bitcoin fit in a 2” by 2” cold storage wallet (offline).  The Gold required an 18 wheeler to haul it.  Bitcoin is digital, therefore, it is more fungible and mobile than Gold.  As millennials age less and less Gold will be owned as a store of value.  Likely the value of Gold will drop slowly over the next 25 years.  Neutral ATM still owns some of it since for the next several years it will be a good store of value.  Below is Ray Dalio’s take on the subject.  He is the #1 rated hedge fund manager in the world:

The next chart below shows public debt denominated in Bitcoin.  This public debt is from Poland.  However, it looks similar if you used US public debt denominated in Bitcoin.  Raoul Pal coined the phrase “Bitcoin is eating the world”.  All assets denominated in Bitcoin are losing value fast.  Many countries will begin buying Bitcoin along with Pension Funds, so they do not lose purchasing power to Bitcoin.  This phenomenon really began in earnest this year, it should continue and get worse until central banks and pension funds start buying up Bitcoin.  When will that really start.  Perhaps it takes until the next bull market cycle in 2024 2025.  Why wait, buy Bitcoin now.  Once this happens, individuals better have already begun owning it as a store of value.  If not, they will see their saving melt away quickly.  UBI, will be their only saving grace.  Neutral ATM has followed global macro economics for many years, and we firmly believe the study of this shows us the US Dollar cannot survive long term and Bitcoin has emerged as the successor.  If we are wrong, we will admit it publicly.  Some other successor would have to emerge and we have not seen it.  One must understand, being early is a risk, but a great advantage.  Neutral ATM is early.  Get off zero Bitcoin: 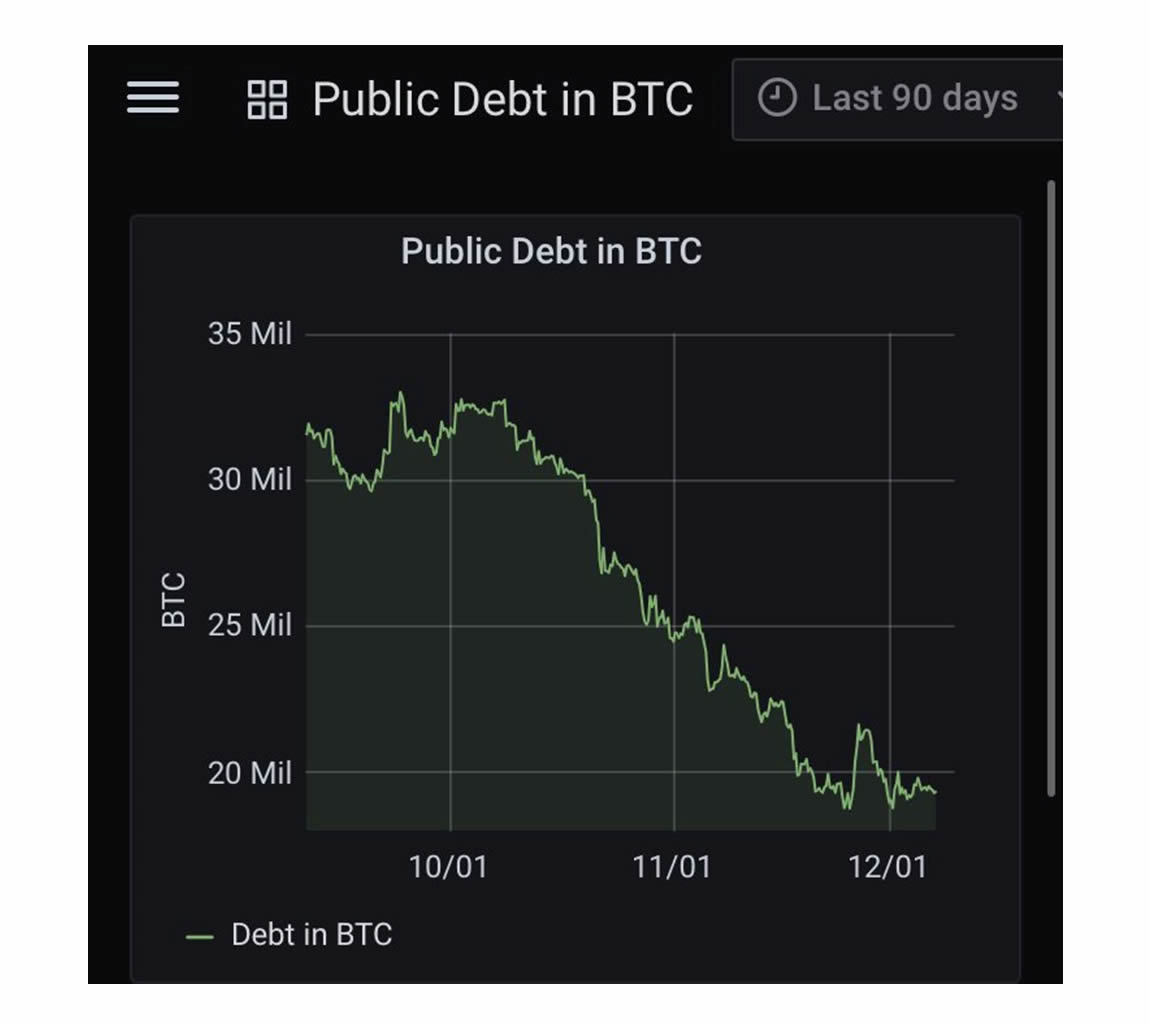 Holding on to fiat dollars is far riskier than holding on to Bitcoin.  Play the long game and be early.  Neutral ATM is here to get everyone off of zero Bitcoin.