Bitcoin is a Necessity

A lot to get in to today!  Let’s start with Gary Gensler’s quote from this week:

China Evergrande situation is not clear yet.  We reviewed Real Vision articles about this specifically and we need more clarity before we understand how this affects markets, and Bitcoin specifically.  We know effentually, scared money will land in Bitcoin more so than Gold/Silver.  However, the question is, will the Chinese Government bail out China Evergrande.  MSM says yes.  The CCP gives no word one way or the other.  In 2008, Lehman Brothers smoldered as an issue with no clarity for quite a while, then it all hit at once.  China Evergrande should unfold in a similar fashion.  What we know right now, is the bond payment due yesterday was not paid.  China Evergrande has a 30 day grace period until they are in default.  After October 23rd, this issue could rise to another level, or not.  Depends on if there is a bail out before then.  More patience required.

As we wait for what Neutral ATM believes, is the inevitable supply shock, whereby Bitcoin prices turn parabolic, here is an interesting article from January 2020, click here to read.

“As long as mining energy continues to increase, Bitcoin is executing a silent takeover of fiat currencies.”

Recall early this week, our blog showed a chart on the hash rate recovery.  Currently 52%-53% of the lost hash rate from the China mining ban has been recovered.  Until that gets closer to 100%, this Bitcoin choppy sideways price action could remain a problem.  See the next two charts covering January 2020, and the next chart after that, covers August 2021: 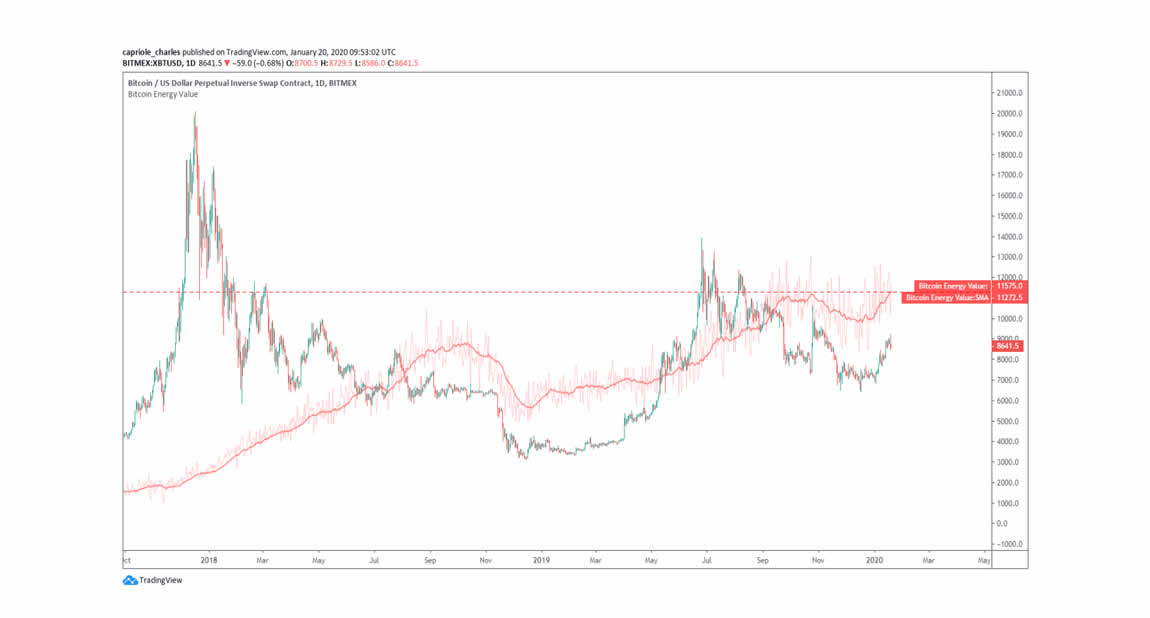 They do not exactly track the same things.  The above chart from January 2020 is tracking the Bitcon energy value.  The chart below from last month, is projecting further hash rate growth and how that would impact Bitcoin price action. 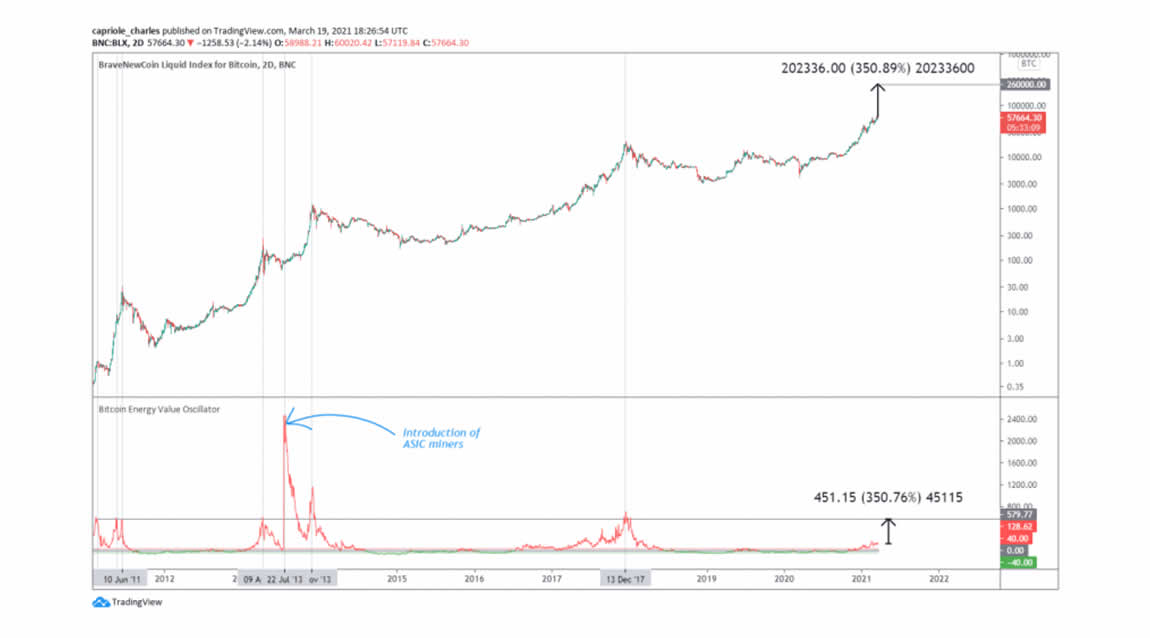 Below is a chart tracking the spend on Bitcoin vs it’s return: 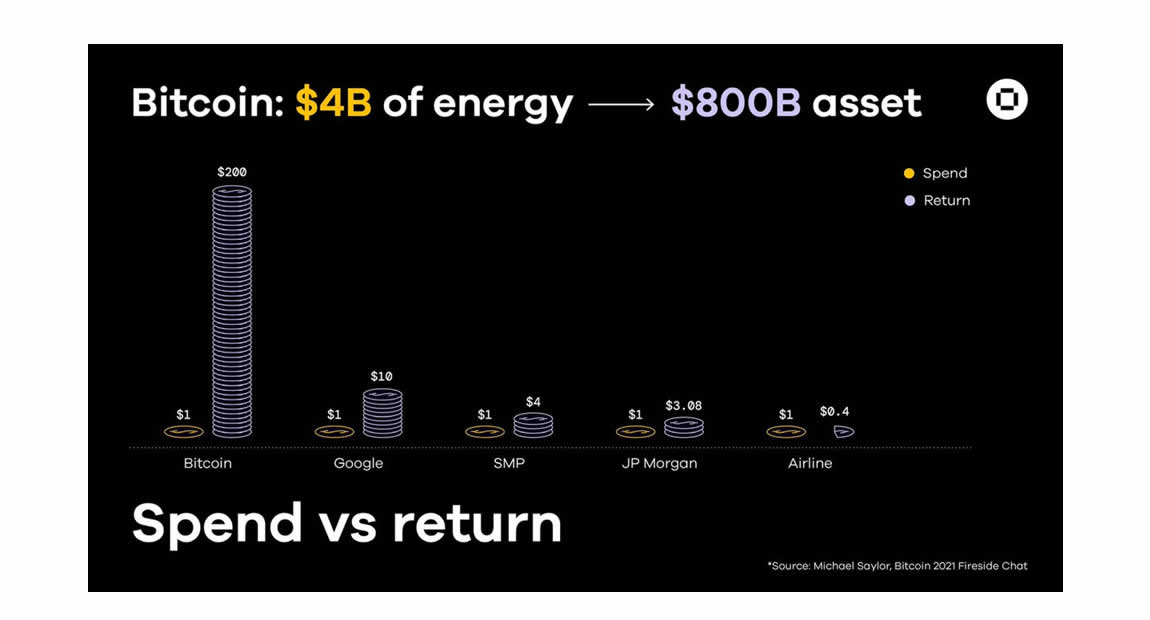 Seems like bitcoin bottoms out around ~$50-75,000 USD transferred for every 1 Megawatt-hour used in mining. Currently Bitcoin is transferred ~$140,000 USD / MWh. As the hash rate increases, the price should increase which in effect will cause more demand for Bitcoin mining equipment to be deployed, which will further this energy efficiency!  To put this another way, it costs $12,500 in energy to mine one Bitcoin today.  Bitcoin is worth $42,100 right now.  It was a good bit higher in early September.  We expect October to show much better returns than September, (September is the worst month of the year for historical Bitcoin returns).  Nevertheless, if Bitcoin energy usage is using up wasted energy (Gas flares, Associated gas from operating oil wells), and it is producing more than it costs consistently.  Then, it is an efficient energy usage, which makes oil and gas more green and more efficient!  With that being true, more operating wells will mine Bitcoin, and hash rate will be recovered in the next few months, or sooner.

Earlier this week the President of Turkey said he was at war with Bitcoin.  Here is the price of Bitcoin, priced in Turkish Lira below: 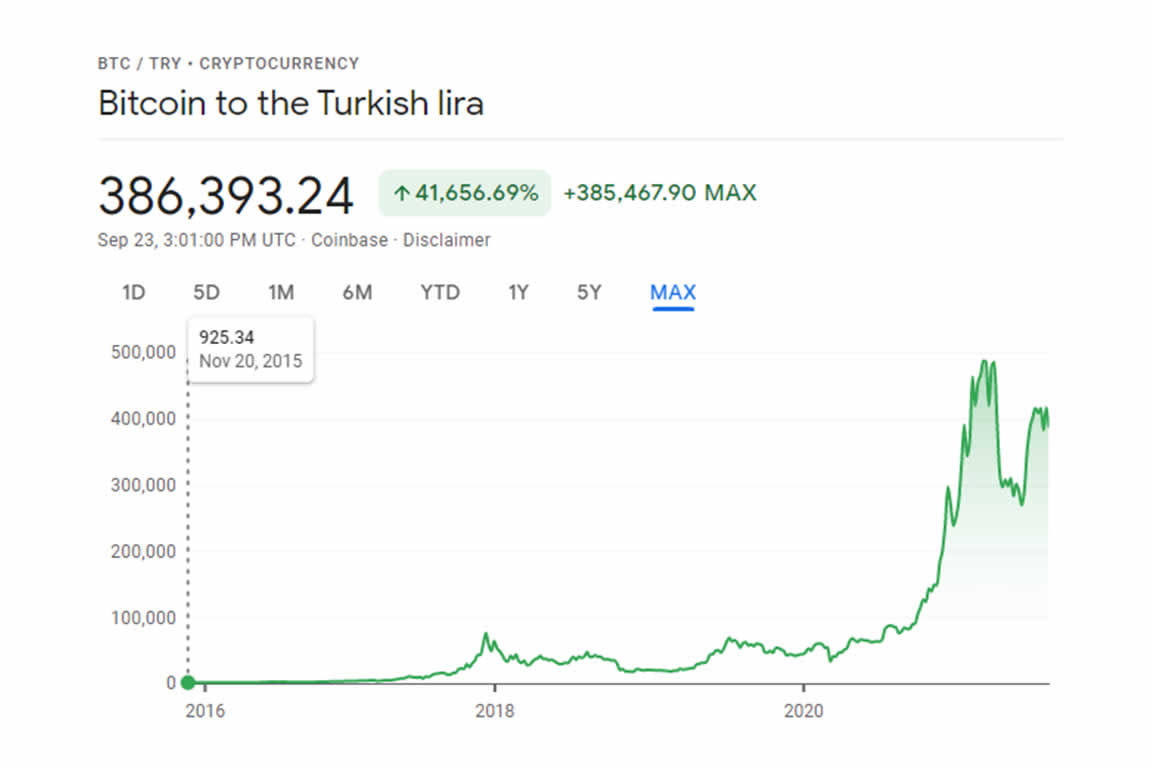 That currency has NO value at all.  Of couse the President of Turkey is at war with Bitcoin.  China is at war with Bitcoin too.  They again declared it illegal to transact in Bitcoin in China.  The price dropped this morning a little and is close to recovering that loss by the end of the day.  China has banned mining and banned Bitcoin dozens of times, yet they only had to ban Facebook once in that country.  Governments cannot kill Bitcoin, despite their actions.  Revert back to Gary Ginsler’s quote again:

All fiat currency is a private form of money since all central banks are privately held.  They are NOT part of any government.  This creates a massive conflict of interest!  So while monetary devaluation rages, inflation rages, deflationary crashes loom large, while central banks are at war with Bitcoin.  This happens: 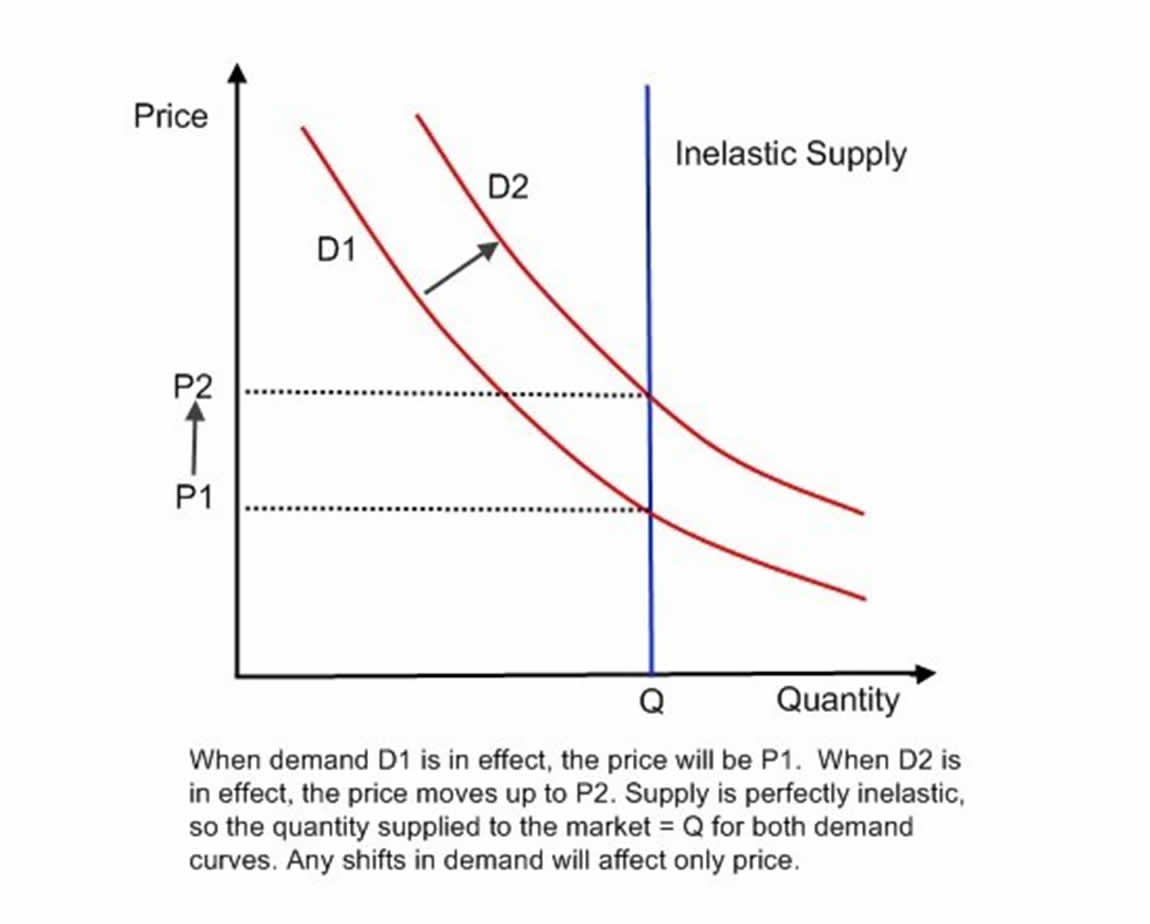 Demand for Bitcoin is much higher than a year ago, supply is still inelastic, fixed.  This will drive up price action at some point.  Below is another chart to evidence this: 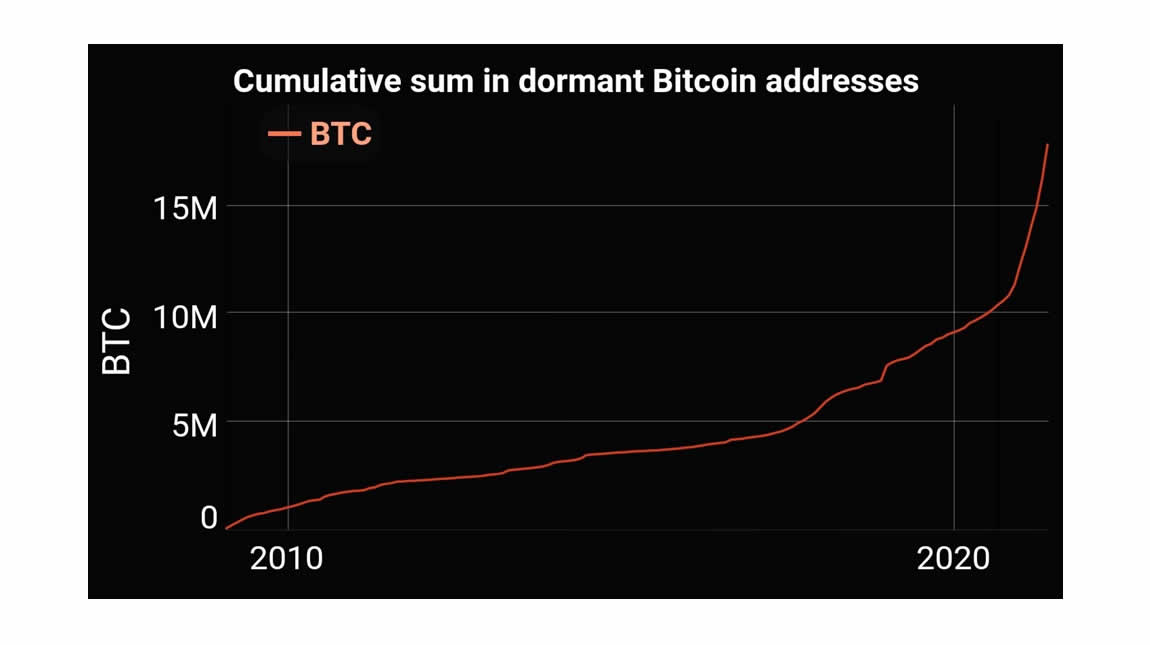 Older coins are not being sold, they are not moving in the market.  As demand increases, as more miners get back online, the supply shock will begin to have a parabolic effect on Bitcoin price action.  Inspite of central banks, or the President of Turkey!  They should tie their fiat currencies to hard money instead of inflating them away to little or no value over time.  The time value of money globally is at stake.  If you exchange your time for money, save that money in a fixed, hard, digital form of money, that is decentralized from central banks and governments.  Crypto currencies are NOT decentralized, only Bitcoin is.  Store your wealth in Bitcoin.  You will be glad you did, over time.  The reason is, you put a stop to the time theft of inflation.  You replaced that with the time gift of a deflationary store of value.  Whereby, everything you need gets cheaper, because what you store your money in, gets more valuable!  Remember, Bitcoin averages 250% annual return on investment since 2009!