Bitcoin In Focus, As The Enemy and The Answer!

Reality, if you understand it, is spiraling down right now.  Not our choice, but that is where we are.  The point of our blogs is Bitcoin and hard money education.  Yet, right now as this spiral appears to speed up.  We need to explain it.  Why it happened, what is most likely to happen next.  This will lead you to Bitcoin.  Hang on, 2021 is going to be a wild ride, already has been, right? Leading up to 2021, the US economy was wobbly, at best, from a global macro perspective.  One must get up very high and see the big, big picture to make the right financial moves.  This is what we are helping with, getting up high enough to see what is really going on.  Below is a log graph of US national debt.  Note the little arrow pointing at 1971.  President took us off the Gold standard that year.  This means the USD was no longer pegged to the Gold price, starting 8/15/71: 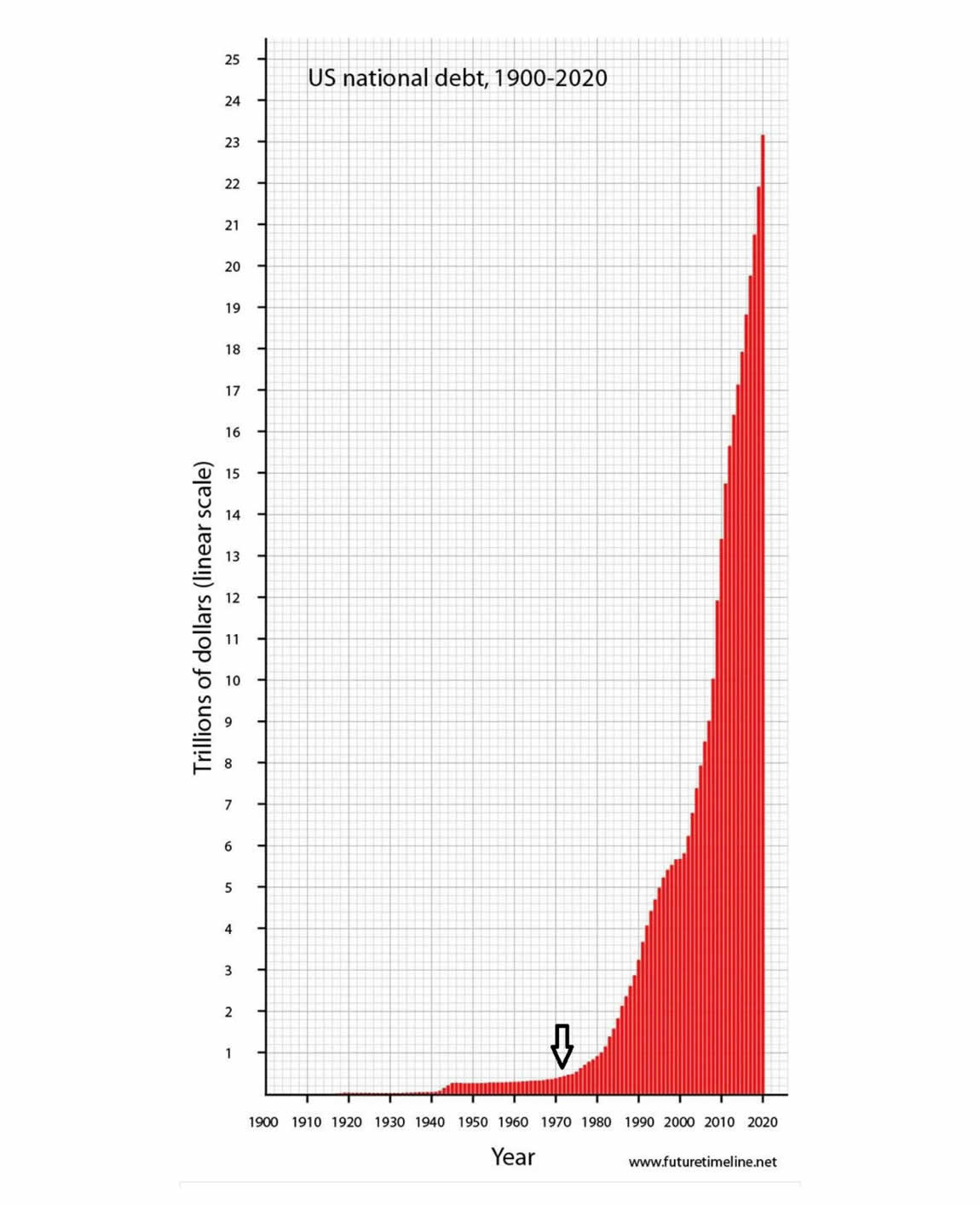 The peg to Gold kept monetary devaluation in check but was not sustainable.  Therefore, it was lifted and looking back, national debt skyrocketed the next 50 years.  Now it is totally unsustainable.  It leads to corruption.  In the tweet below, we find a hint of it.  Average CEO pay is up 1,322% since 1978, click here to view on Twitter.

Yet rank and file worker pay is nowhere close to that level since 1978.  That is where the corruption lies.  The wealth gap has widend because of this.  Here is a chart of M2 money supply: 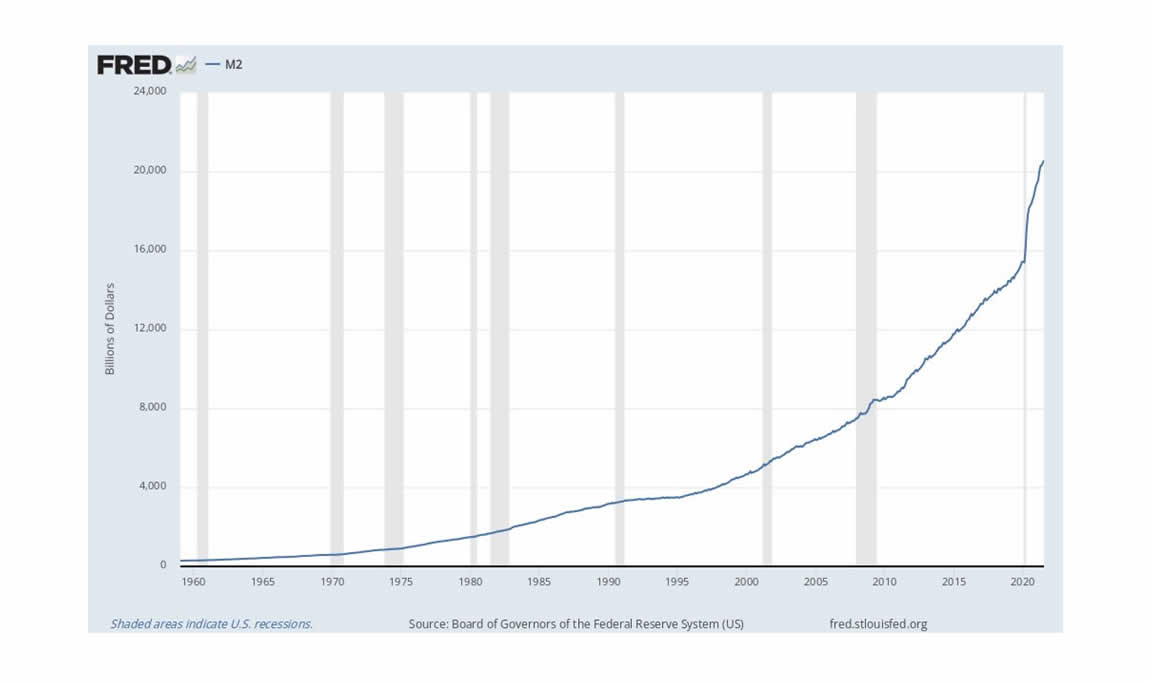 The Fed stopped tracking that last year but the totals are known so the graph can be extended.  We know Gold has been controlled with paper derivative contracts for the most part since 1971.  Over the last decade, per the tweet below, Gold has lost some value, click here to view on Twitter.

Proving Gold is losing out to Bitcoin as a store of value and as a hedge against this monetary devaluation.  Reverse Repo operations have gone into overdrive lately.  Last weeks all time record was broken, $1.352 Trillion in one day last week: 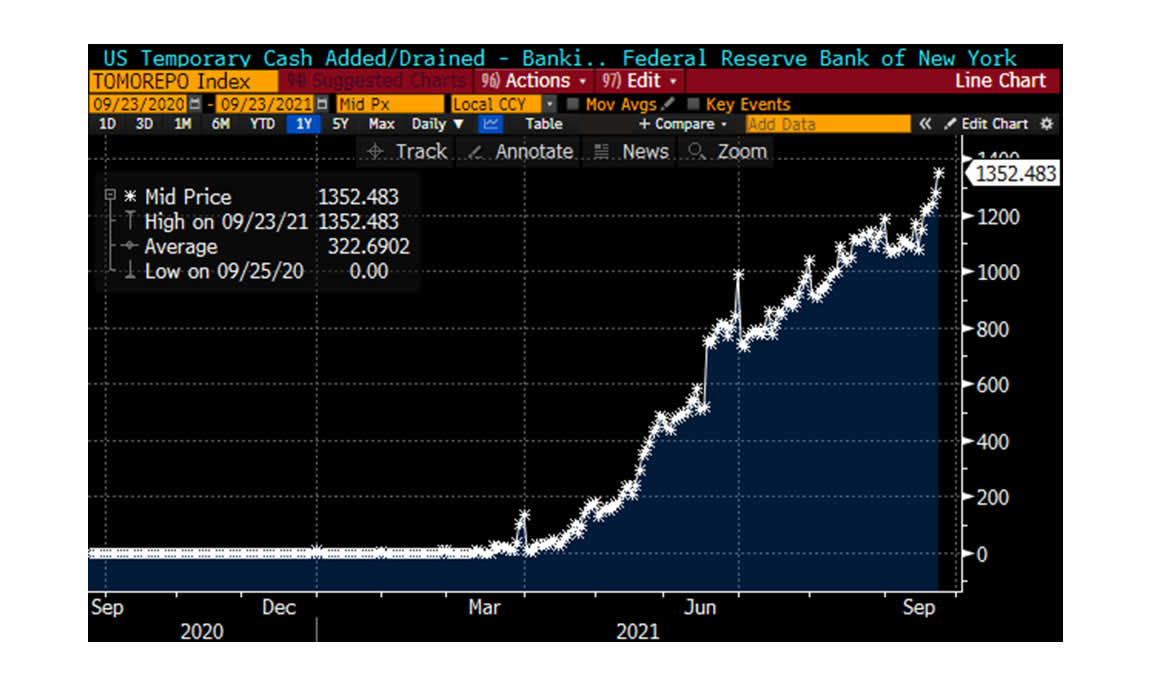 We keep bringing up reverse repo operations.  Bank liquidity is depending on commercial banks repossessing treasury bonds daily in exchange for liquidity.  This operation keeps expanding on a regular basis.  This keeps treasury bond yields from growing, it is part of yield curve control and as this grows the risk of a deflationary crash grows with it.  Unsustainable! Back to more examples of how out of control the corruption really is: 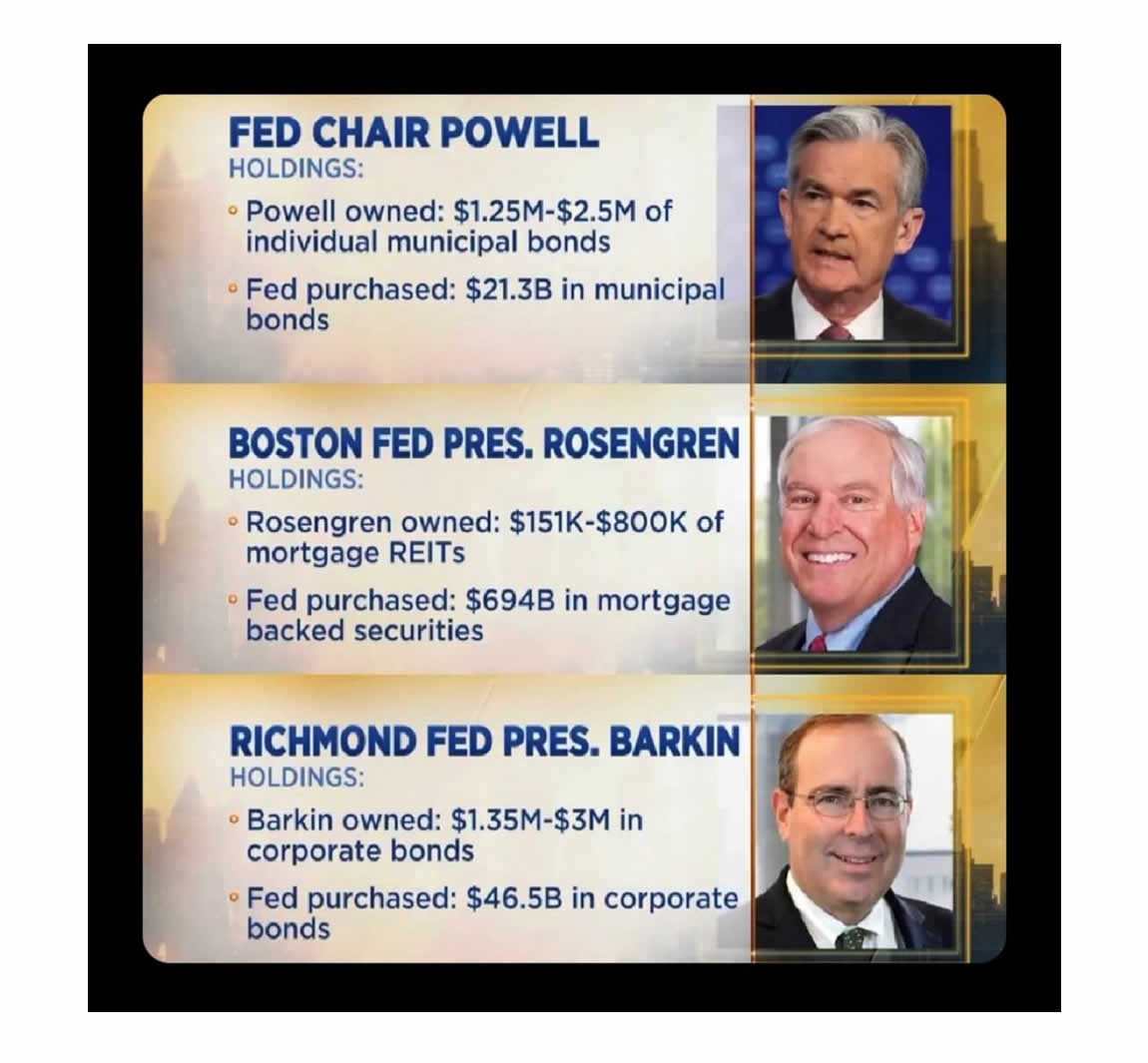 Fed Reserve presidents are profiting off of the Fed policy of buying back bonds and mortgage backed securitities.

China Evergrande is a blog in and of itself lately.  The Chinese Government still has not bailed them out so far.  Below are US institutional investment companies tied up in the China Evergrande scheme.  This smells funny to us as well:

Our understanding is the Chinese Government is planning to bail out the local investors, but NOT the foreign investors which includes PIMCO, UBS, Vangaurd, Fidelity, iShares, Schwab.  Therefore, it could be ominous towards an October mega crash in real estate and stock markets!  How will this impact Bitcoin?  It is NOT good.  We have been bullish in most blogs, but to say China Evergrande, and the bubble it could pop in global markets, will not affect Bitcoin.  Seems foolish.  Bitcoin may hit $38K in the next week, maybe more:

It could drop below that.  However, the trend is our friend: 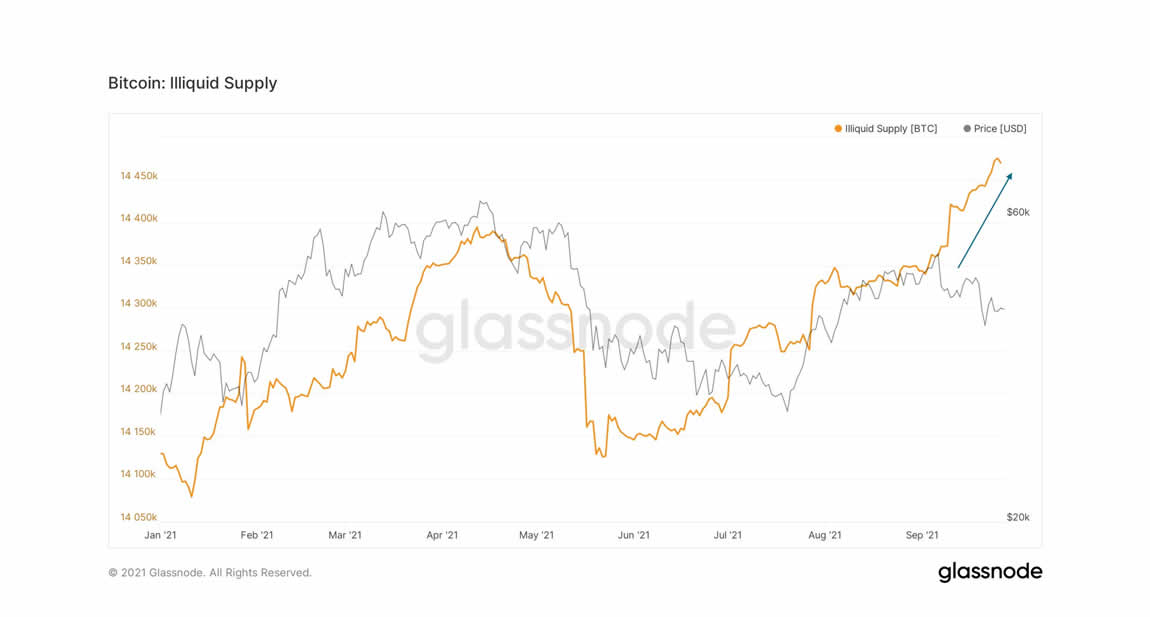 We therefore predict, a drop into the $30K’s.  We think it will be very brief, if it happens at all.  It may not.  Buy the dip if Bitcoin breaks below $40K.  Here is why.  As the above chart shows.  Illiquid supply ushers in supply shock.  When there is little to no Bitcoin left to buy the price will go parabolic.  It happens in every bull run.  What will break the trend that has never been broken since 2009?  China Evergrande, the China FUD from last week?  These things will drop the price temporarily, like a game of wack-a-mole!  In all previous Bitcoin bull runs, the parabolic bull run happens.  We cannot see a reason not to believe, eventually, this unfolds in 2021, and it could easily run into 2022.  Too early to tell.

The economy, and the world appear in really bad shape.  We say, that is because fiat currency is debt based and enslaves the world.  It leads to out of control corruption and hyper inflation.  El Salvador has embraced the freedom from that slavery, which Bitcoin brings, click here to view on Twitter.

We leave you today with this picture from 1920’s Weimer Republic in Germany.  It lead straight in to the third reich, Nazi Germany.  We cannot let that happen…again: 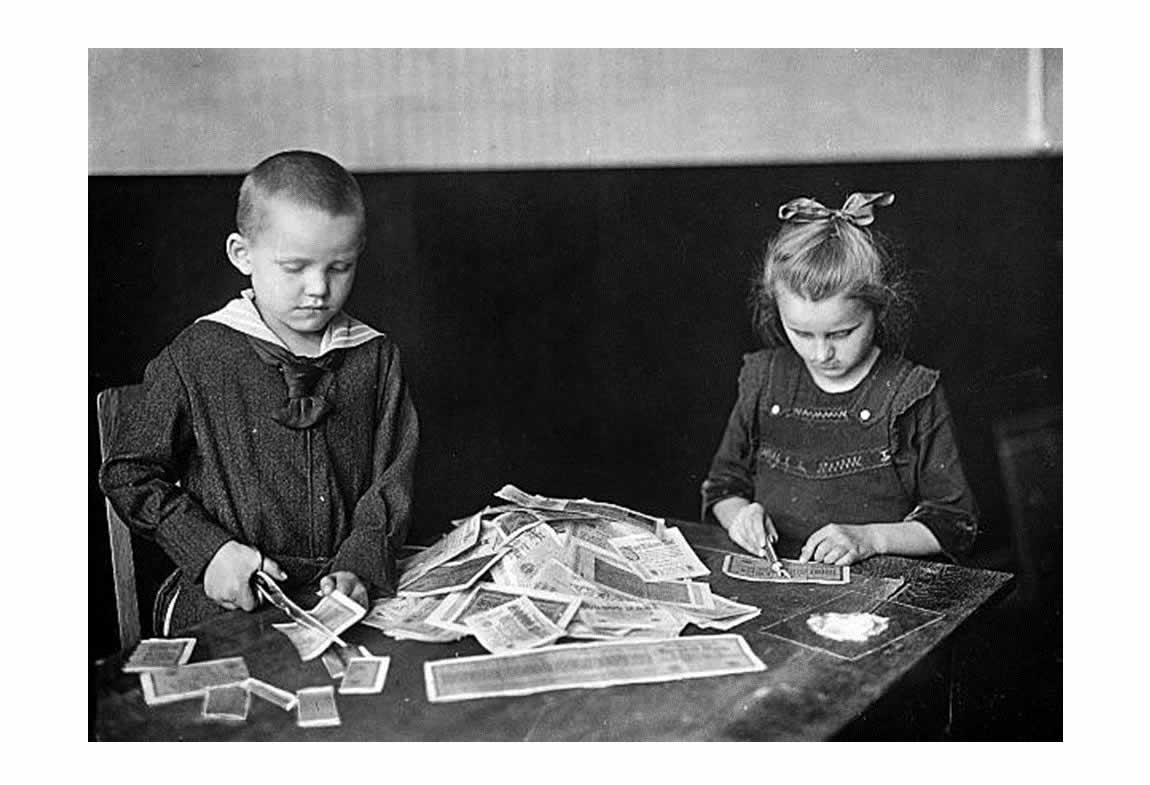