Bitcoin Got Caught in a Mass Media Plot Twist!

Today, we discuss how the Omicron Variant, straight from the Wuhon Verology Lab, affected Bitcoin.  It dumped Sunday from $59K to $53K.  It looks to us, like a plot twist.  The Gislaine Maxwell trial starts today!  Let’s start there.  On the attached co-conspirators list and accusations court document, there are many coporations and famous people listed as plaintiffs in this pedophile ring case against Gislaine Maxwell.  There are also 100 John Doe defendants, 100 Jane Doe defendants, and 100 Corporation Doe corporate defendants listed as plaintiffs.  The Omicron variant came out the weekend before this trial began!  Then, Bitcoin and Stocks dump due to this new variant.  Here is the court document below: 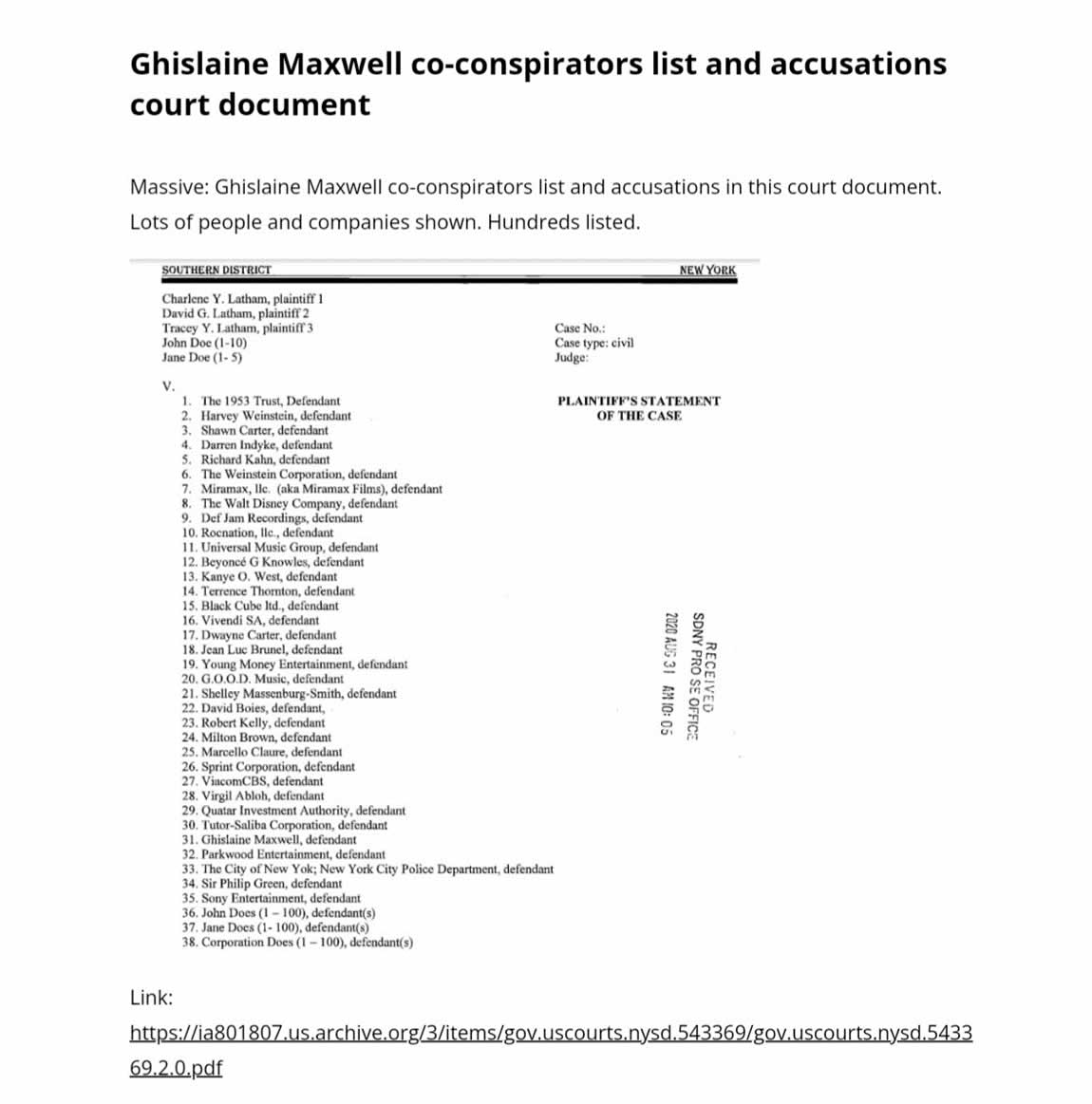 Then we can look at the circular logic of the Treasury and the Fed.  This cartoon below explains it best: 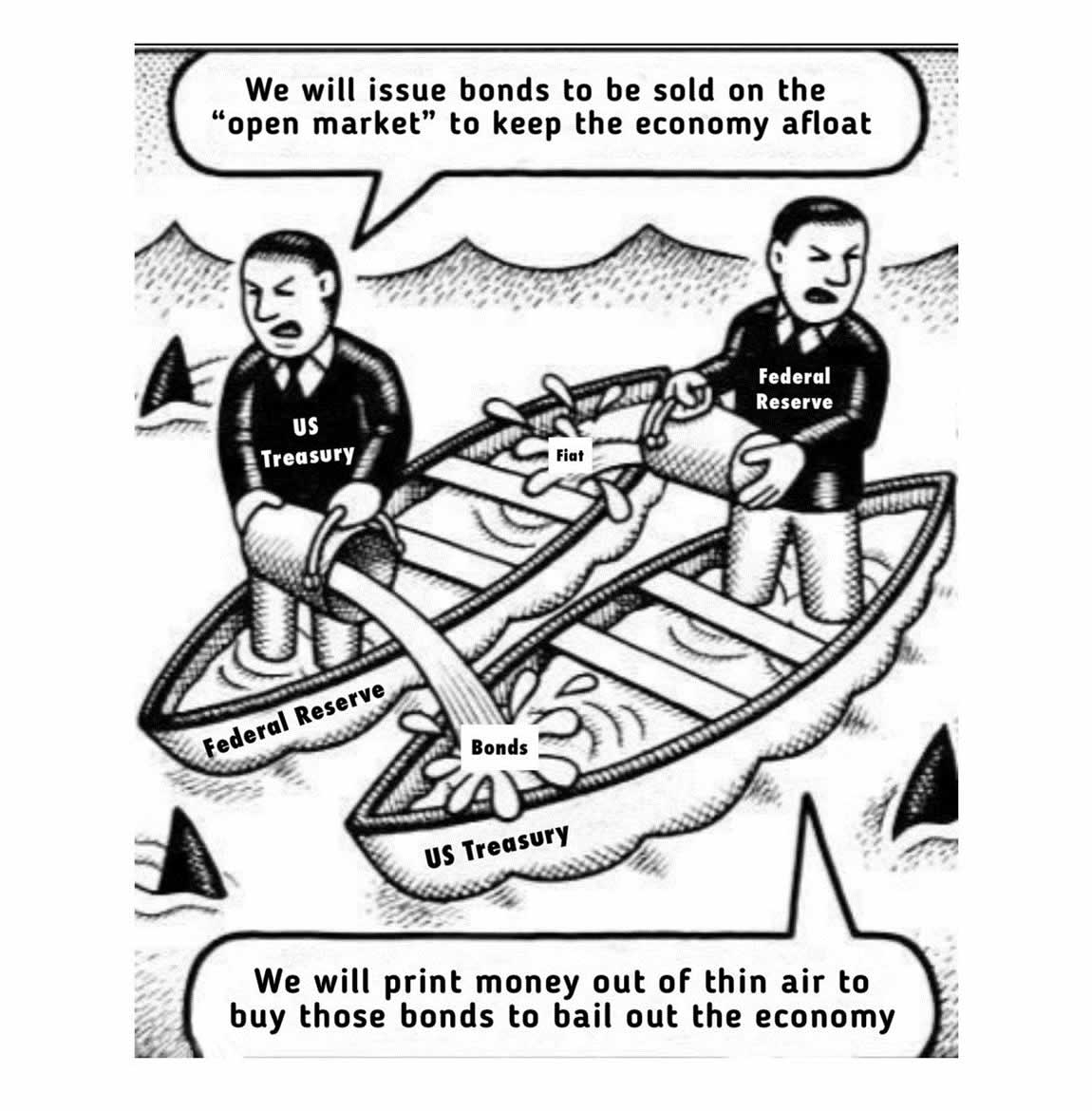 Where does that leave us?  Real rates on the 30 year bond are -1%.  So, as the TGA (treasury general account) created bonds, then used QE (printed money, called quantitative easing) to buy back those bonds.  They put bank reserves into the TGA.  Bank reserves are how Banks loan out money.  This allowed fortune 500 corporations to buy back their own stock with these bank reserves at very low rates, not offered to the public.  Essentially trading in borrowed USD for their own stock, which pumps the stock price.  This is a form of shorting the US Dollar!  Using bank reserves from the TGA to do it!  US Coporations have been shorting the dollar since spring of 2020.  Whenever the TGA (treasury general account) gets low, another debt ceiling vote happens in Congress to extend it.  What we are saying is a lot of things in the economy are truly rigged!  That includes the stock markets.  The timing of the Omicron variant, the Bitcoin and stock market dumps, timing perfectly with the Gislaine Maxwell trial starting today.  It’s all rigged, we don’t like it.  This is why we Bitcoin!  Yes, it can be artificially dumped, but is is not 100% rigged like stocks are.

See the debt ceiling chart below: 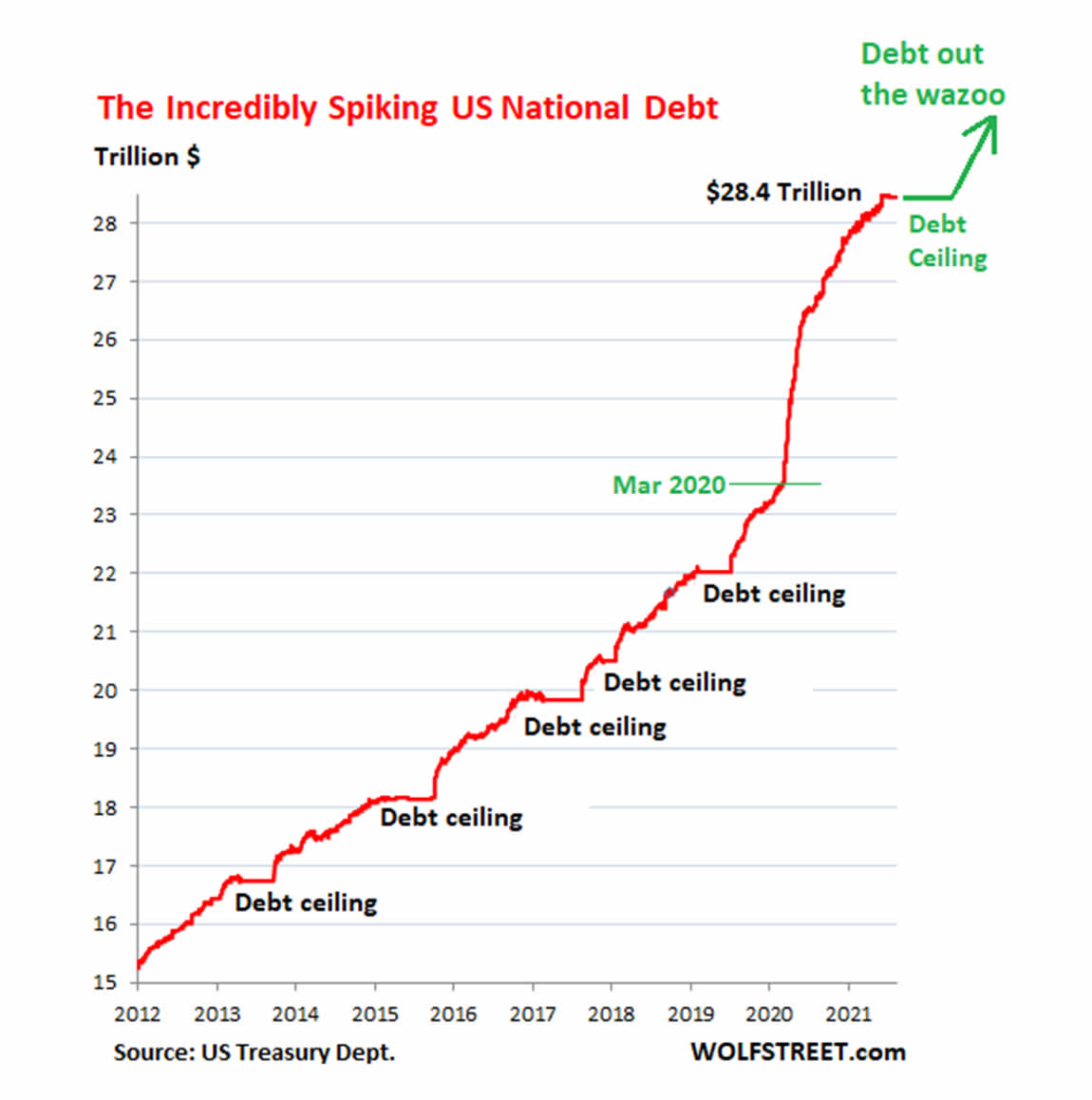 As this ceiling keeps getting raised and stimulus or “infrastructure” bills get passed.  The US economy grows its broad money supply greater and higher than ever.  Couple that with forced low interest rates and a real propensity to not taper for long at all, and the US economy is going to be dealing with inflation a long, long time.  It is NOT transitory.

What is unique to Bitcoin is both it’s scarcity (21 million coins maximum) and it’s decentralization.  Since the futures ETF’s were introduced a few months ago we have seen more Bitcoin dumping on que.  That is what we saw on Sunday.  Yet the short term holder cost basis has historically been a bouncing off place on the charts.  See below: 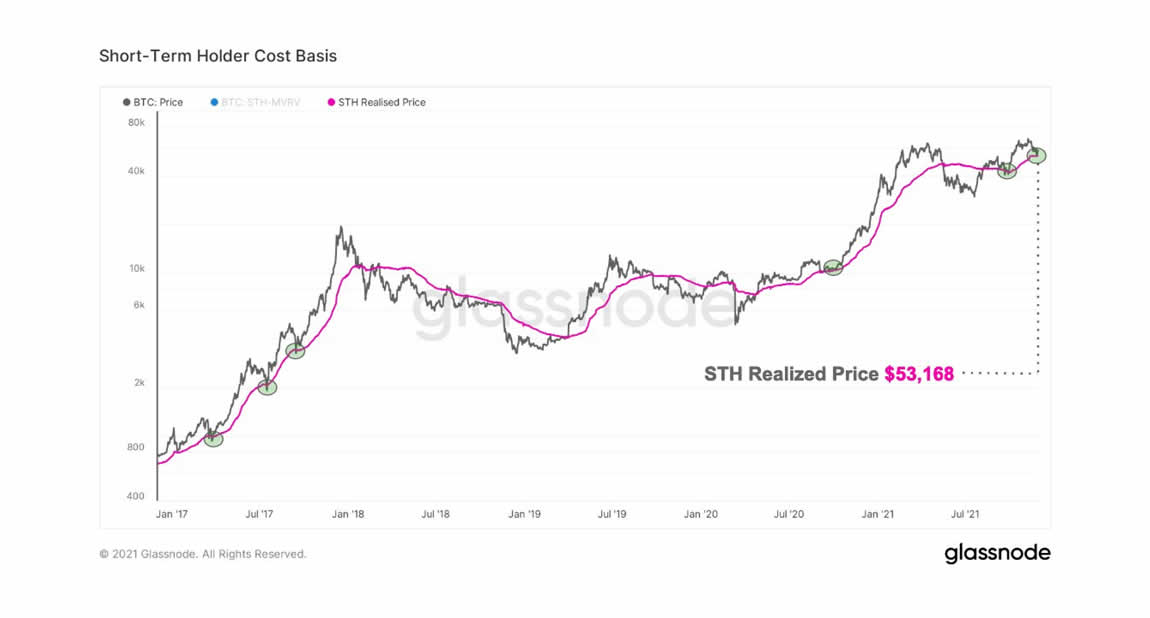 We expect and have already seen a bounce.  Bitcoin is back to $59K in under 24 hours.  Consider the fact that so many Bitcoin holders are not selling their coins.  The age distribution of 18.9 million Bitcoin distributed so far, matches similarly to the distribution of Bitcoin each year since 2009.  See this chart below: 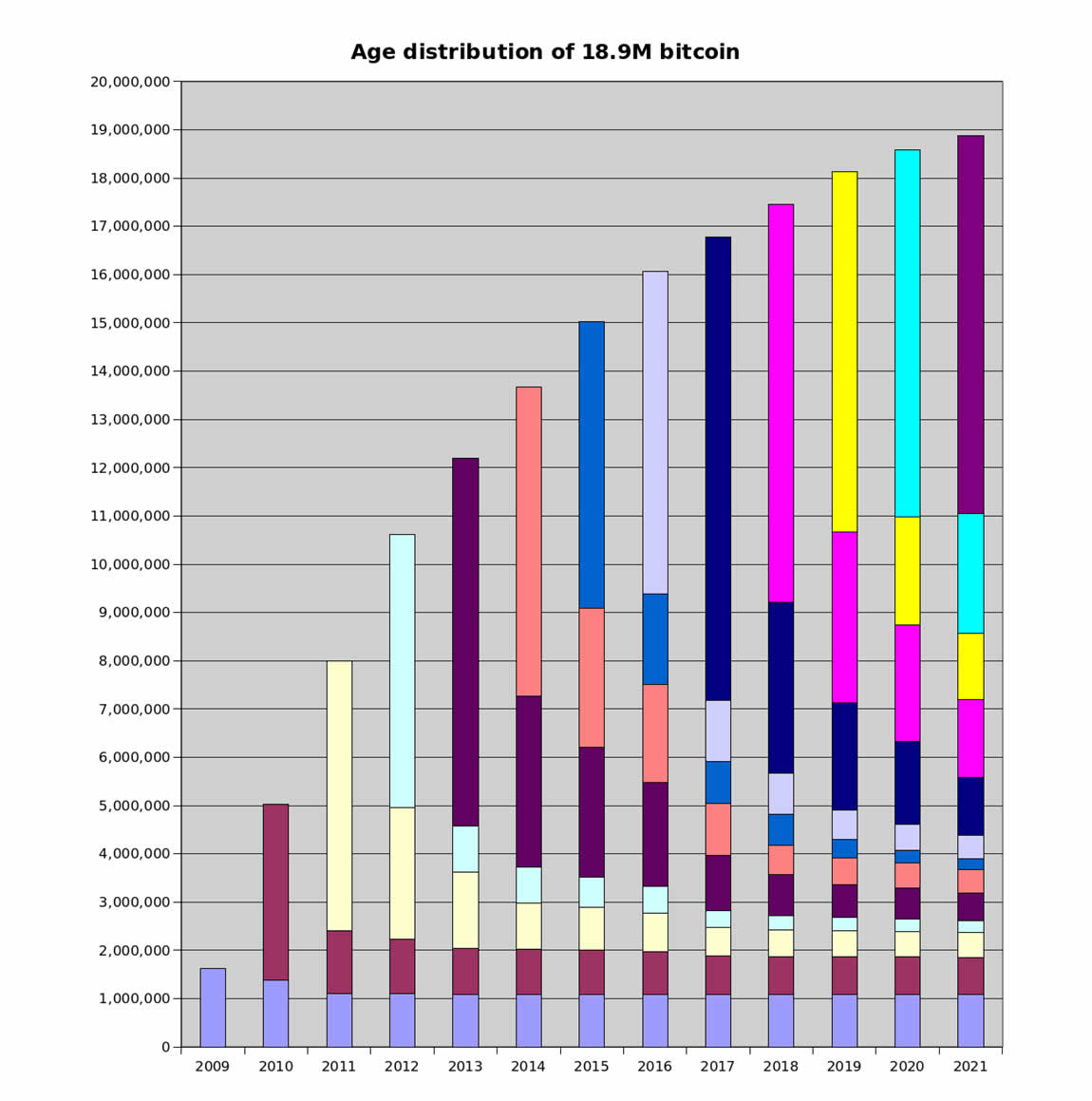 This next chart breaks it down further for you.  So in 2021, 40% of the Bitcoin distribution was produced this year.  That percentage will drop next year, but not too much after year two.  See this chart for that: 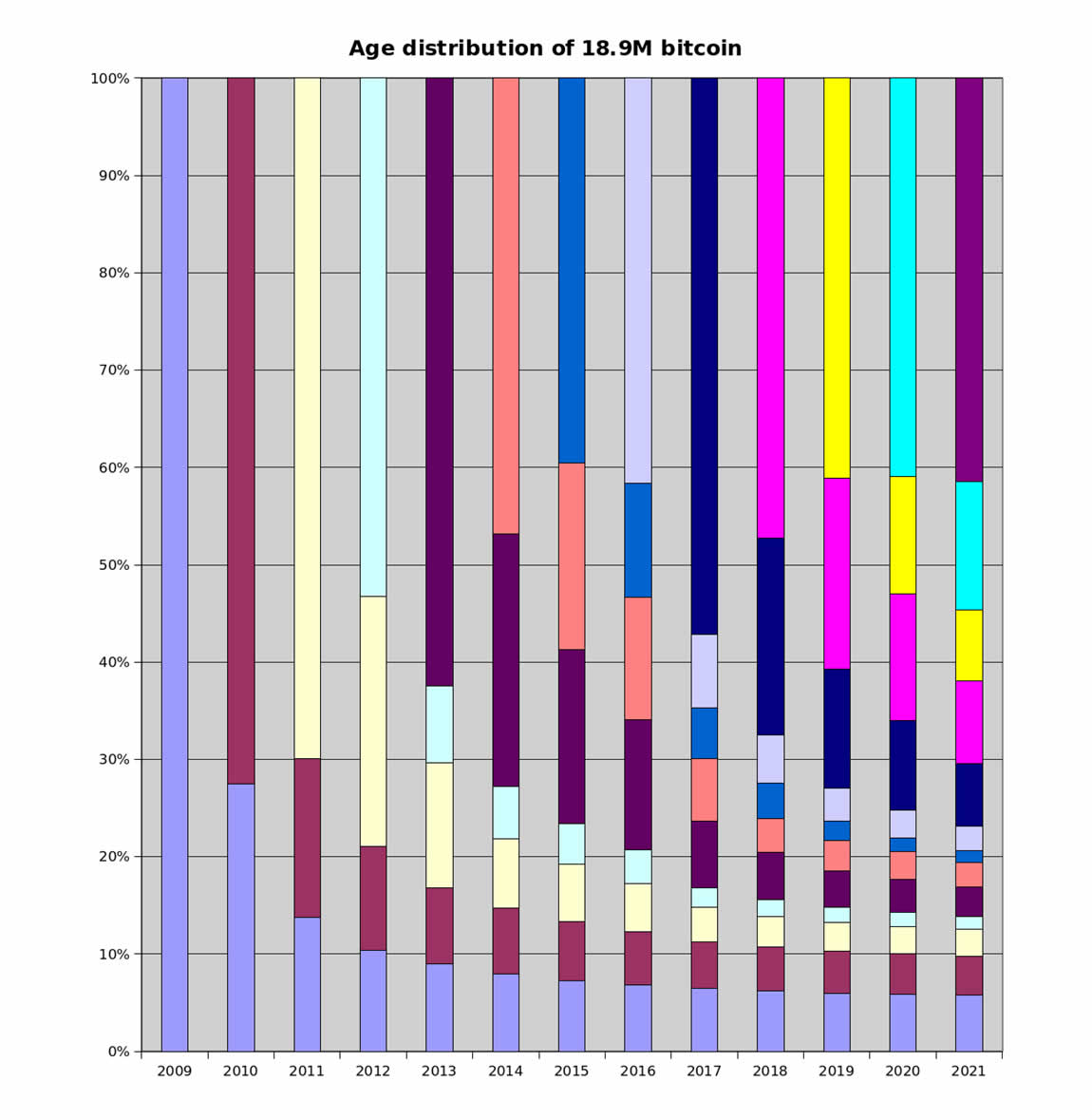 2020 coins are 13% of the total distribution.  2019 coins are 9% and 2018 coins are 10% of the distribution.  At the next halving the current year distribution will be cut in half.  Increasing Bitcoins scarcity.  As for it’s decentralization.  It is the only crypto currency that has no individual founder.  Bitcoin was created by an anonymous group who never sold the original blocks produced.  Plus, decentralization is now enhanced by the fact that every miner and node operator controls Bitcoin in 200 countries.  Only a permanent closure of the internet could stop Bitcoin.  Governments cannot control it, rig it.  If authoritarian measures are employed.  Holders can buy and store it in a new jurisdiction.  Bitcoin is too popular now to ban globally.  China tried that dozens of times, and has never found any success banning Bitcoin.

Therefore, if this latest “plot twist”, trying to sell us fear of the Omicron variant, and subsequently dumping the markets does’nt work, what will they come up with next?  Another variant, a climate crisis, a protest somewhere?  Stay on track, hedge inflation, don’t buy into this cartoon world: 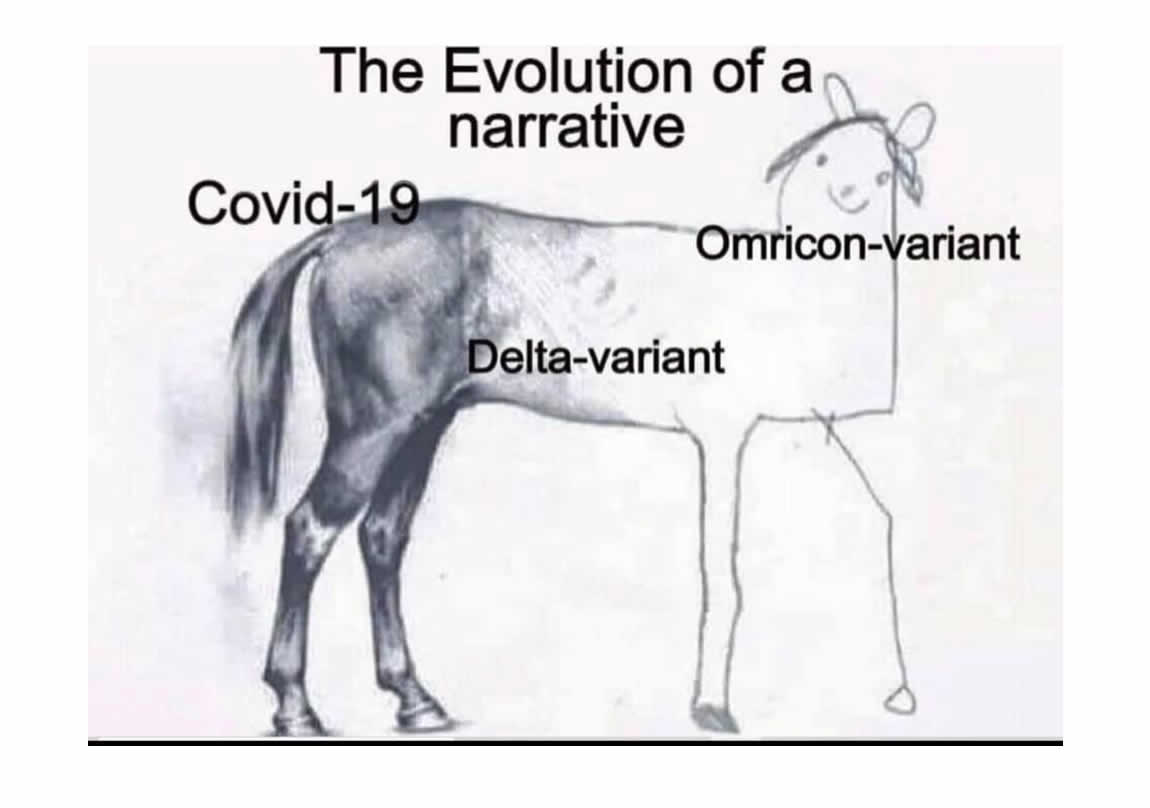 Just buy Bitcoin and HODL (hold on for dear life).