To us it is obvious Bitcoin is an a major battle with the $59K to $60K price level and trying to break through.  Until Bitcoin can close a few daily, or better yet, a weekly candle above $60K, it will struggle in this consolidation mode below that level.  One big reason for the struggle is manipulation either from the futures ETF’s approved recently, or other well monied sources shorting Bitcoin, pulling it down when it closes in on $60K.  This battle has raged for a while now.  One ray of hope, is the solid base Bitcoin formed on the fear and greed index when it languished below $50K for months, during the entire summer 2021.  See this fear and greed chart for Bitcoin below:

Eventually, Bitcoin will break through.  Perhaps the issues with the infrastructure bill in Congress are slowing it down.  However, inflation rages on.  Globally.  Here is the Turkish Lira, inflating 40% in one month against the USD: 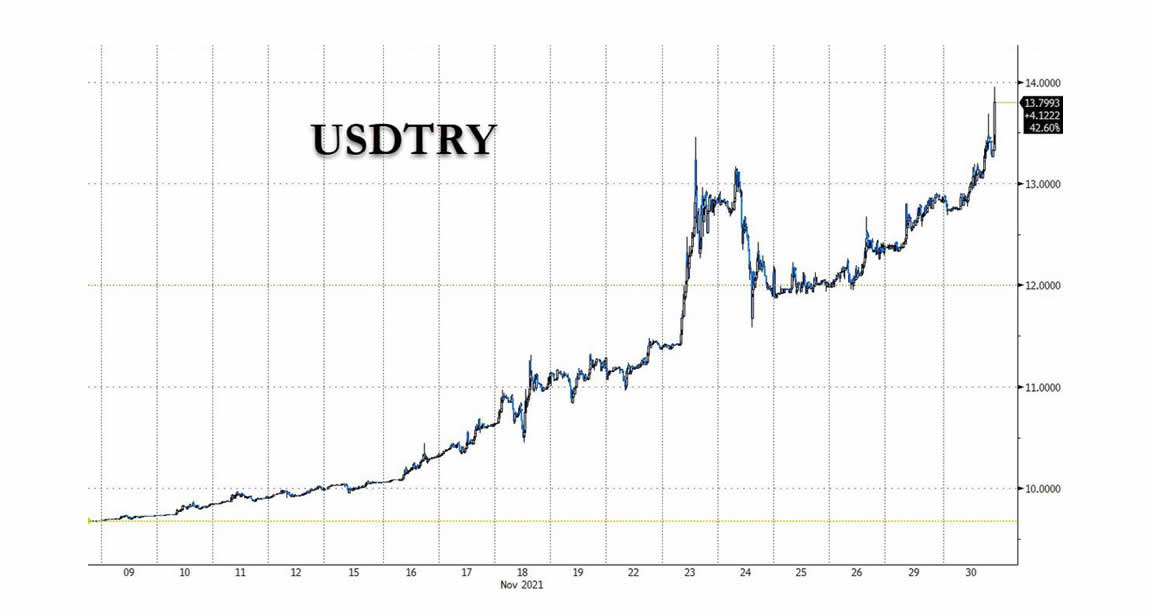 Central banks globally may not like Bitcoin, but they cannot stop it.  The President of Turkey Recep Erdogan waged war against Bitcoin publicly yet the Lira is in Hyperinflation and Bitcoin is worth almost $800K in Turkish Lira.  The fact that Bitcoin is decentralized, scarce  and the blockchain is totally separate from any Central Bank over reach is what they don’t like.  Bitcoin has taken control over the population away from global central banks.  As Gary Gensler said, it is competition to the banking system.

More well rounded ETF offerings to Institional Investor’s will increase appeal to Bitcoin and steer investment away from simply Bitcoin future’s.  Not the same as Spot Bitcoin held offline.  We are glad there are ETF’s, now we need diversity among ETF offerrings for Bitcoin.  We hope these changes happen early in 2022!  Investor’s need more options to add Bitcoin to their portfolio’s.  Here is why!  Real yield’s are negative globally now.  10 year bond yield minus the CPI rate in each country is real yield.  Of the 9 countries on the below chart that have positive real yields, 6 of them are in hyperinflation or close to it right now.  So they are using higher yields to try to slow down inflation.  The US is not there yet, but it will happen eventually.  This is why the world needs Bitcoin: 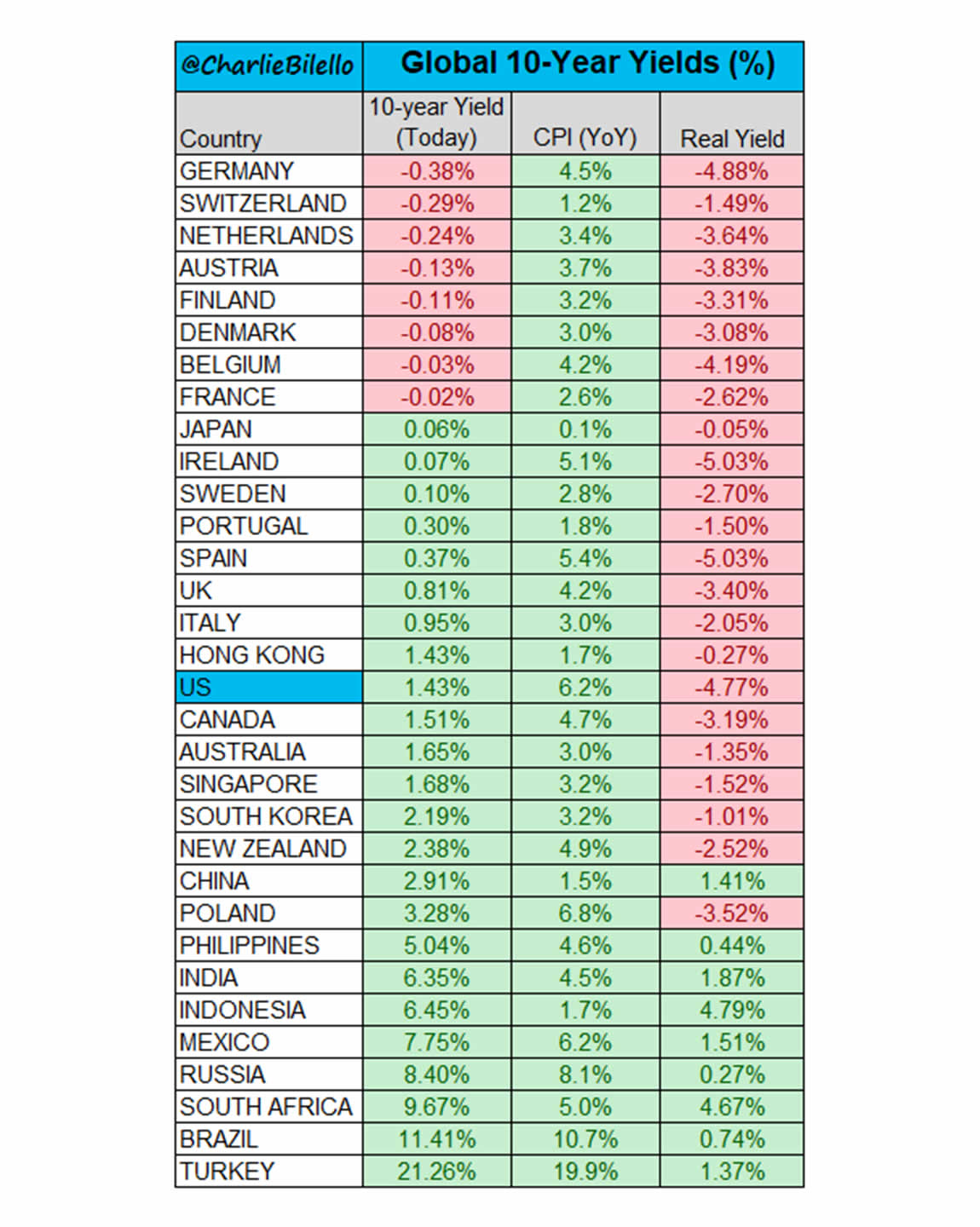 It is also why there needs to be more diversity among Bitcoin ETF offerings for institutional investors.  Bitcoin has won and lost some battles, it appears though, that it is winning the war overall.  It is made of math, has proof of work on the blockchain with a difficulty adjustment to fine tune the algorithym’s difficulty.  That allows blocks to be produced every 10 minutes on average.  Without the difficulty adjustment, block times would fluctuate too much.  Bitcoin may be boring today, but there is still accumulation of illiquid supply of Bitcion.  See this final chart below.  As LTH accumulates and Illiquid supply increases, the Bitcoin price gets bullish.  That is where we are now: 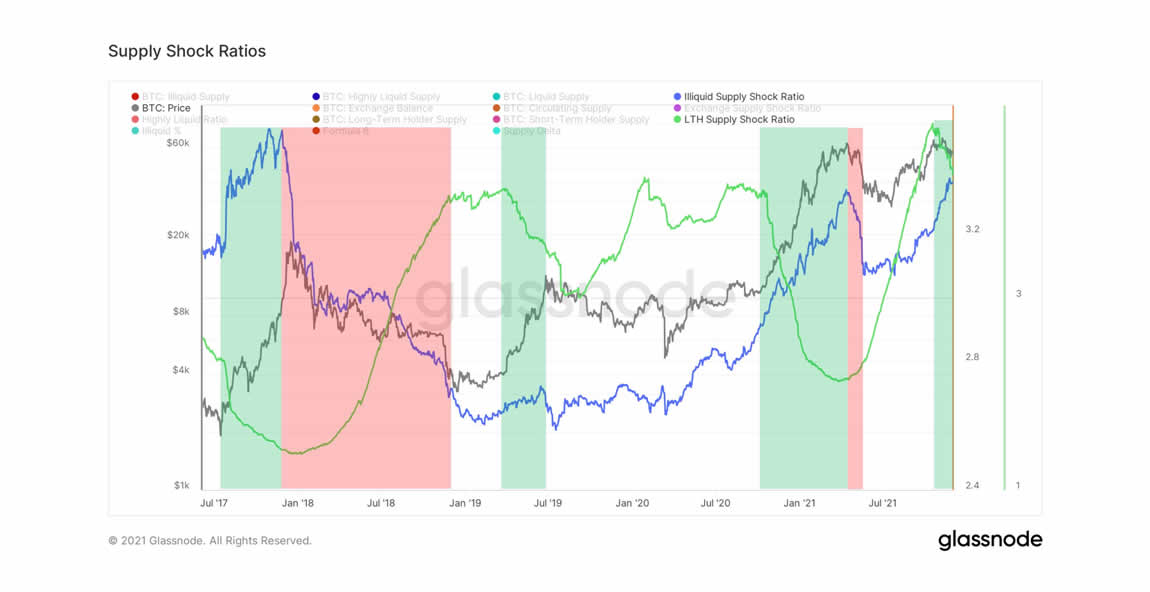