Bitcoin is steaming towards the new ATH of $58,330.  Only $100 to go right now!  It got within $35 earlier today.  This next leg up should easily take Bitcoin well above $60K!  Scarcity in available Bitcoin to buy, as the network effect creates more demand for an ever increasing price, establishes a feedback loop.  This feedback loop, called the network effect, or Metcalf’s Law gives the technology one feature.  Number Go Up: 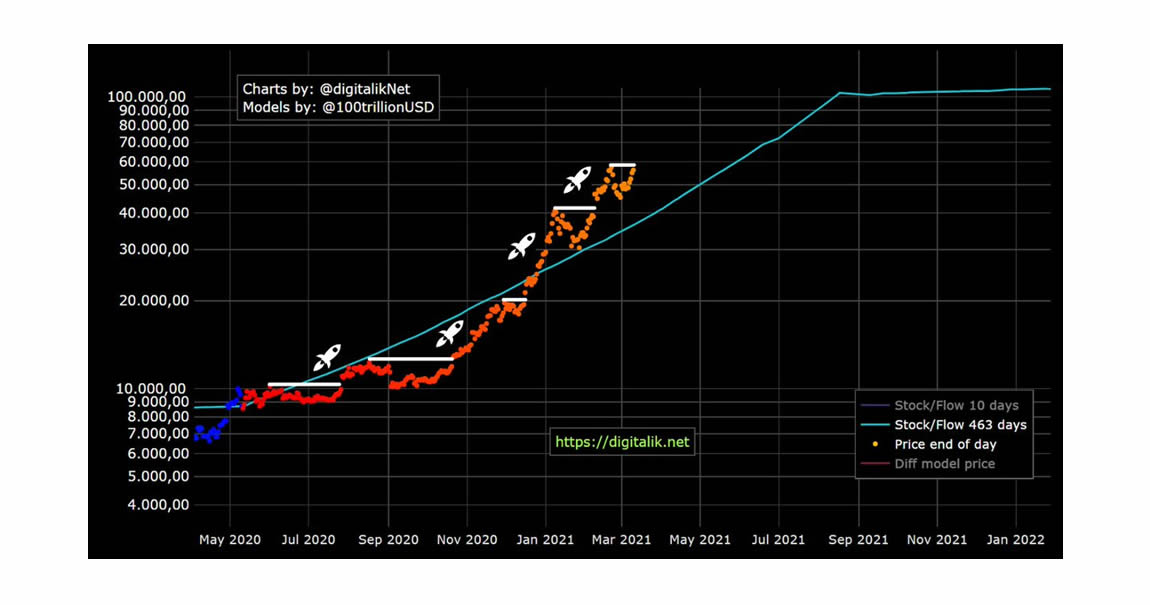 Bitcoin trades sideway’s and down to.  However, the technology which we will try to explain simply below gives us the network effect (number go up, NGU).  Let’s start with the stock to flow: 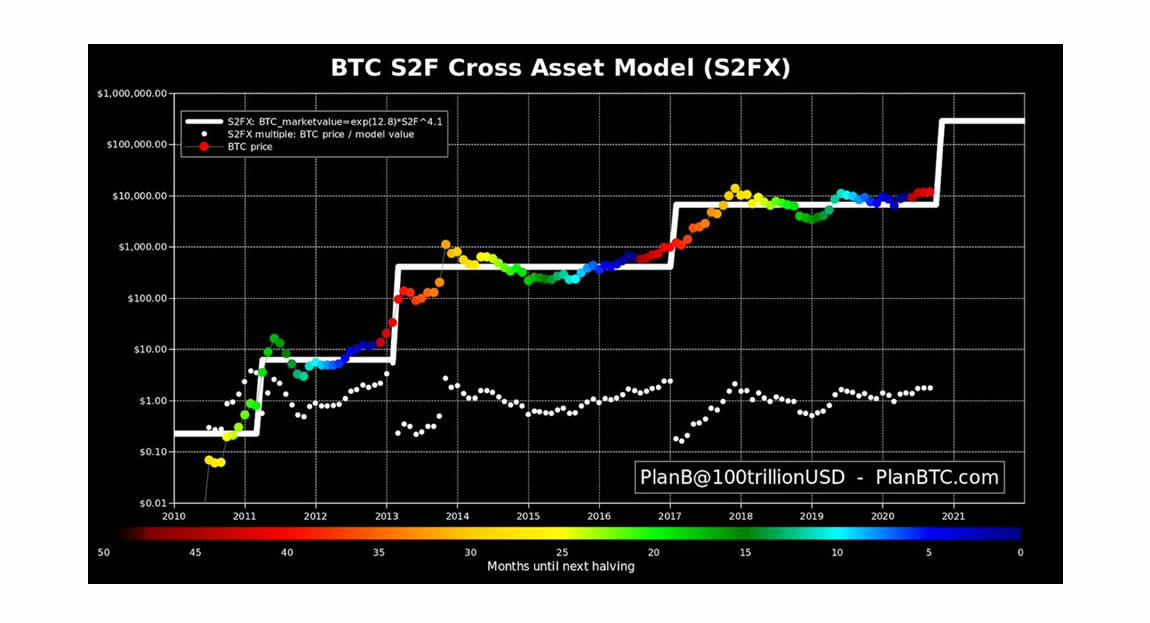 Yep, even now after 12 years and 2 months of Bitcoin operating.  The stock to flow model still accurately tracks where the Bitcoin price is going before it gets there.  That is what differentiates Bitcoin from other assets or investments.  Bitcoin is NOT associated with human emotion.  Not when we are discussing it’s underlying technology.  People get emotional, but that has nothing to do with the underlying technology.  So, what differentiates Bitcoin is the math and energy which apply the underlying technology.  Miners that mine Bitcoin use ASICS computers on an elliptical curve digital signature algorithym.  As we understand it, this type of aglorithym cannot be encrypted by certain types of software programs.  Right now ASICS computers are used to mine.  The difficulty adjustment can move the primes out if a software allows a miner to mine Bitcoin faster than other miners.  In other words, if one miner is mining a block of Bitcoin in 9 minutes, 35 seconds.  While other miners are taking 9 minutes and 55 seconds.  The difficulty adjustment moves out the primes to level the playing field and disallow a software program to mine too fast.  Bitcoin is rhythmic.  The blocks are mined every 10 minutes or so on the average.  The first miner to solve the equation wins the block reward.  Every 210,000 blocks that reward is cut in half, reduced 50%.  So, the scarcity is rhythmic.  It happens in the same space of time every cycle, generally speaking.  Blocks are not mined a lot faster now than in 2009 when Bitcoin first came out.  The difficulty adjustment prevents that, as does the ECDSA.  The elliptical curve digital signature algorithym.

When you understand the underlying technology, you can see that it is the technology underneath Bitcoin that makes it so special.  The blockchain which never allows Bitcoin to get ahead of itself mining blocks faster and faster.  That does not happen.  So, therefore, Bitcoin really does maintain a rythim.  That is the math aspect.  The energy aspect is the fact that the electrical energy which powers Bitcoin mines, has to be cheap for the miner to stay competitive.  Subsequently, the miners are attracted to inexpensive energy sources in China, Australia, Russia, eastern Europe.  However in the US and Central/South America wind and solar energy options exist.  Basically the best available technology to provide the cheapest energy.  Stranded gas in the oilfields is now converted into cheap power using heat exchangers and gen sets in front of Bitcoin mining units (usually set inside shipping containers onsite).  Any way available to find the cheapest most reliable energy source.  Thus, math and energy combine to create the Bitcoin mined in blocks on the blockchain, every 10 minutes or so.  Tick tok, next block.  What human emotion?  When the block reward is halved, the first 60K to 90K blocks mined after the halving event, generally, have increasing pressure as more blocks are mined, to hold the Bitcoin and not sell.  The NGU phenomenon increases as the blocks mined get closer to the NEXT halving.  That is what the stock to flow is tracking, that is why it is so accurate.

As more and more miners hold their Bitcoin, Bitcoin whales follow suite.  We have shown chart after chart of Bitcoin leaving exchanges.  It is going into deep storage.  This will eventually steepen the network effect.  Demand is increasing, while pressure to HOLD the Bitcoin is increasing.  At the same time!  Thus, Bitcoin has a progromatic bull market for 18 to 24 months once every 4 year cycle.  It is also programmatic that miner capitulation has to occur, probably late in 2021.  We shall see as we get closer.  Then the price action goes the other way.  Only to bottom out at an exponentially higher low price, than the previous cycle.  We have also mentioned how important it is to watch the lows in each cycle.  The last low was 2018 at $3,150.  Neutral ATM sees the next low in late 2022 in the $38K to $60K range.  We paid so little for our Bitcoin, we plan to hold it.  Our focus is how much Bitcoin we own, not the price in USD.  We have hammered the inflation issue to death.  If you own any Bitcoin, you understand that issue.  Your exchanging your loose money, for a scarce digital money.  Treat it like 5th Avenue NYC Real Estate bought in 1945!  It’s never too late to start your Bitcoin stack!  We can sell you $20 worth, or $100,000 worth at our new OTC Exchange we are starting next week.  Rates are almost 1/3 of our ATM.  But the minimum investment is $11,000!