Bitcoin; Difficulty Adjustment, Why the Bond Market is so Important

We get frustrated with main stream media about falsehoods and misinformation regarding a lot of things.  This is true in Bitcoin too.  Look no further than last weeks Yahoo Finance article by Saleha Riaz: 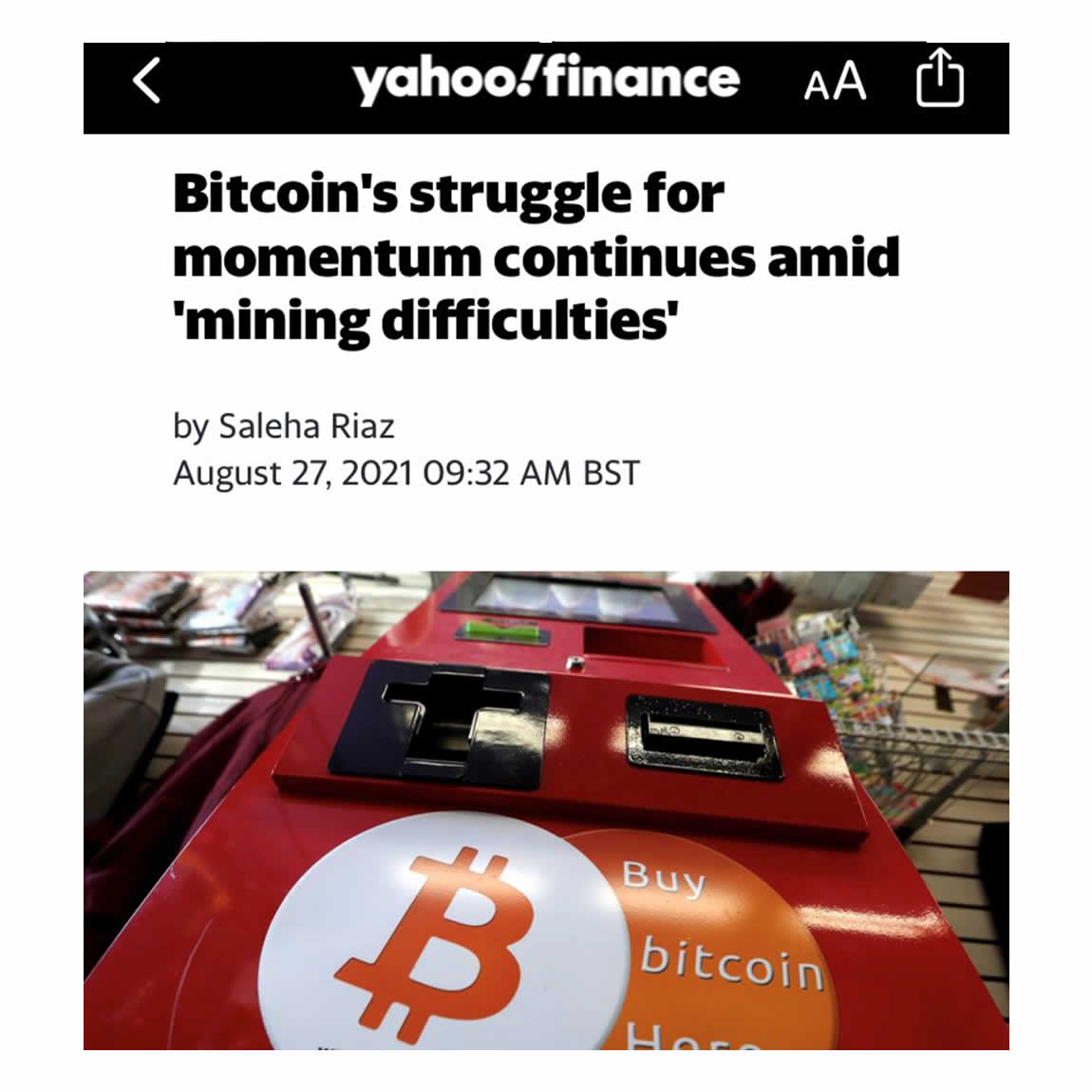 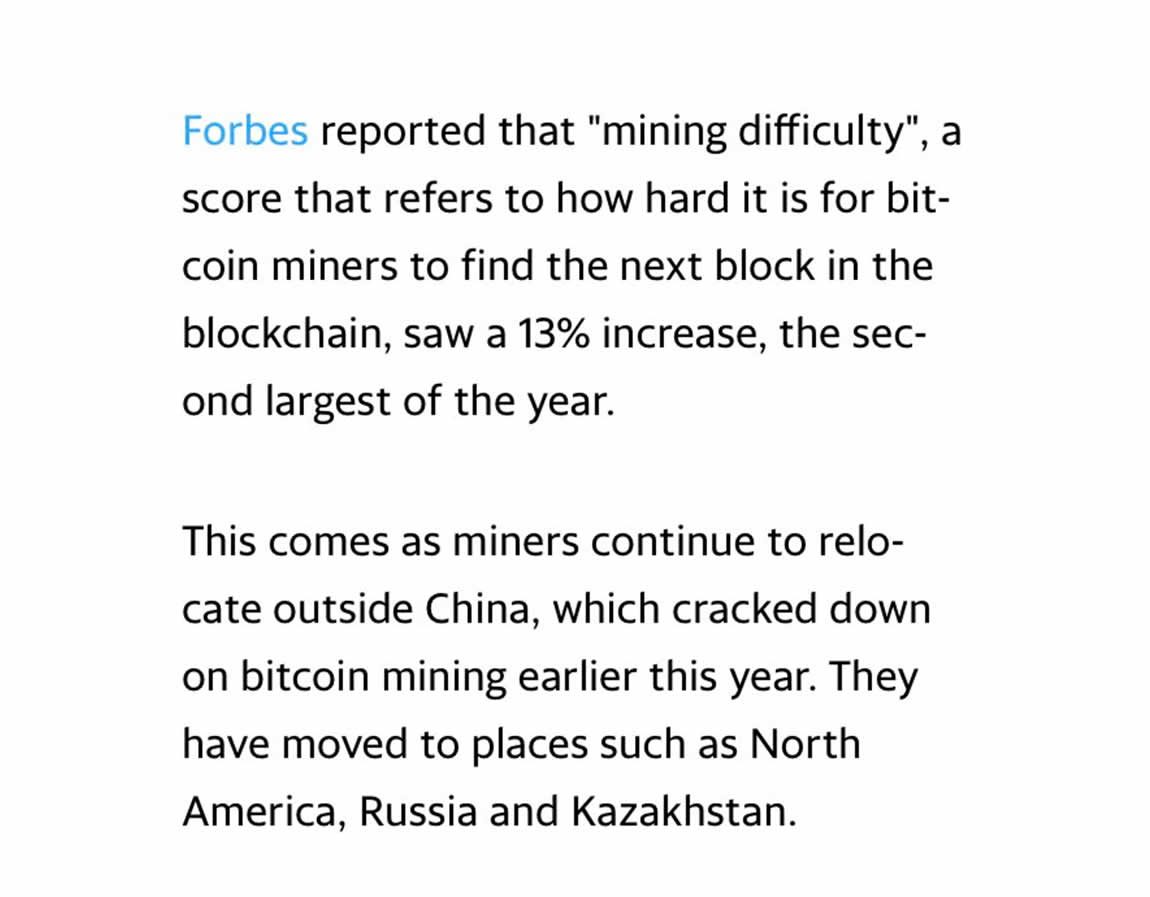 If the hash rate (measurement for exehashes produced each second on the blockchain) goes up, the blockchain can afford to increase the difficulty adjustment.  Having the highest increase of the difficulty adjustment for 2021 right now, is a very good sign.  The reason is the hash rate is rebounding very well, and the block chain can afford more difficulty in the algorithm (used to create mathematic equations miners asic computers must solve to be rewarded a block).  This basically means the difficulty adjustment made the algorithm easier since the China mining ban.  Now the hash rate has improved so much that the difficulty adjustment can go way up, blocks will now be mined slower.  This will also help to prolong the bull run, somewhat.  All of this is good.  The writer above, had no idea what the difficulty adjustment was, yet wrote the article as if they did!  The higher the difficulty adjustment goes at this present time, after the China miner ban, the better.  Same goes for the hash rate.  These adjustments can go up and down.  Considering that a few months ago this ban shut down over 50% of the global mining capacity.  Increasing difficulty adjustments are positive.  The blockchain is very healthy.  If not for the difficulty adjustment, governments/central banks, could have wiped out Bitcoin years ago.  Many people don’t realize the importance of the difficulty adjustment, and how far it has taken Bitcoin, because it allows adjustments to the algorithm.  This happens every two weeks.  By regulating how fast blocks are mined, Bitcoin has remained rhythmic since 2009.  Hence, the supply shock produced by the halving of the mining reward every 210,000 blocks mined.  It always takes 18 to 24 months for this supply shock to work it’s way through and ends in a parabolic bull run for Bitcoin, due to supply demand imbalance.  This concept is central for the overall health of the blockchain.  Every block (miner reward) is there for a reason and has a purpose.  After each halving that reward is halved, the purpose of this is the scarcity we always tout for Bitcoin.  No other crypto currency or asset (precious metals) has this kind of built in scarcity.  Then, you throw in the fact that now, in 2021, close to 10% of Bitcoin is mined offgrid.  That was not important in 2019 and before.  However, now, mining Bitcoin offgrid is paramount.  Because of the 2020 – 2021 advancements in offgrid mining, Bitcoin could easily survive a global power outage.  Central Banks cannot stop Bitcoin.  Thus, it is also the only crypto currency that is truly decentralized.   All proof of stake blockchains are not decentralized.  If you are going to invest in Bitcoin.  You must learn the basics of how the blockchain is operated and how proof of work is different than proof of stake.  If the understanding of Bitcoin is not complete for the investor.  They are far more likely to throw in the towel when MSM FUD (fear, uncertainty, and doubt) goes online.  For example, the China miner ban.  It had zero longterm impact on Bitcoin.  Perhaps it prolonged the bull market.  Perhaps it caused the price to drop temporarily, but the bull run is continuing now, and will not be stopped!  Back to proof of work.  The work that is proven is solving the equation, and being rewarded a block, on the blockchain.  The miner reward.

Let’s change subjects a little, and discuss why the bond market has such an impact on Bitcoin.  Here is a real vision chart on the 10 year bond rates for the last year. 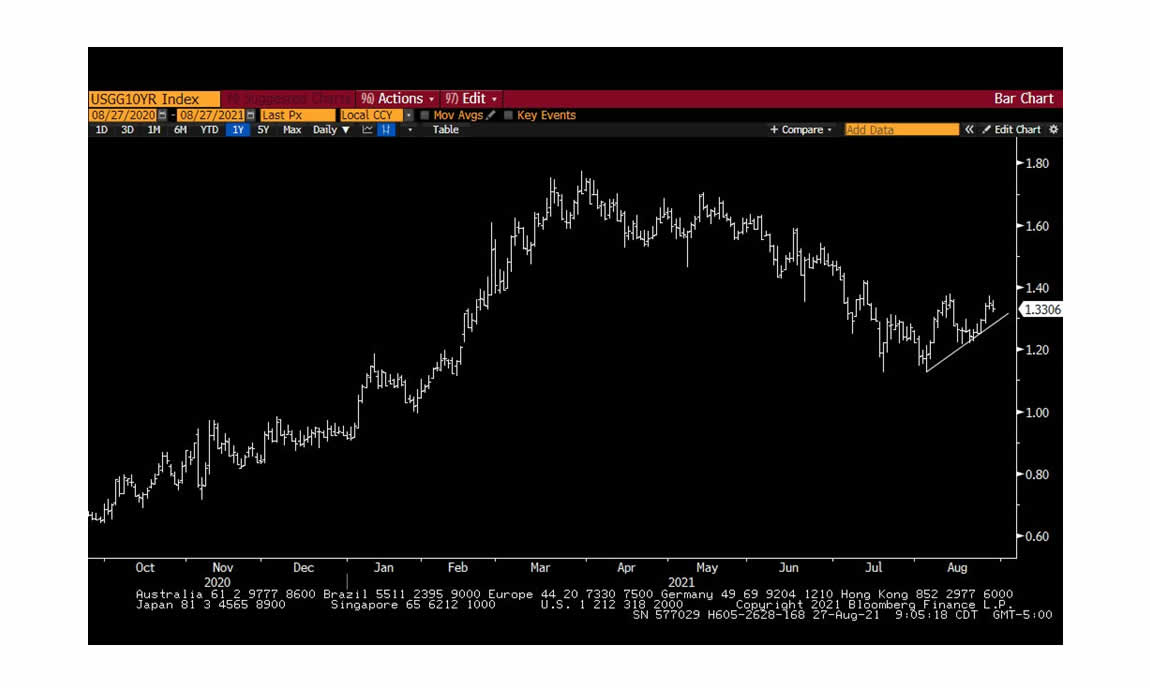 This next chart shows how real rates have been dropping long term, going back to 1985: 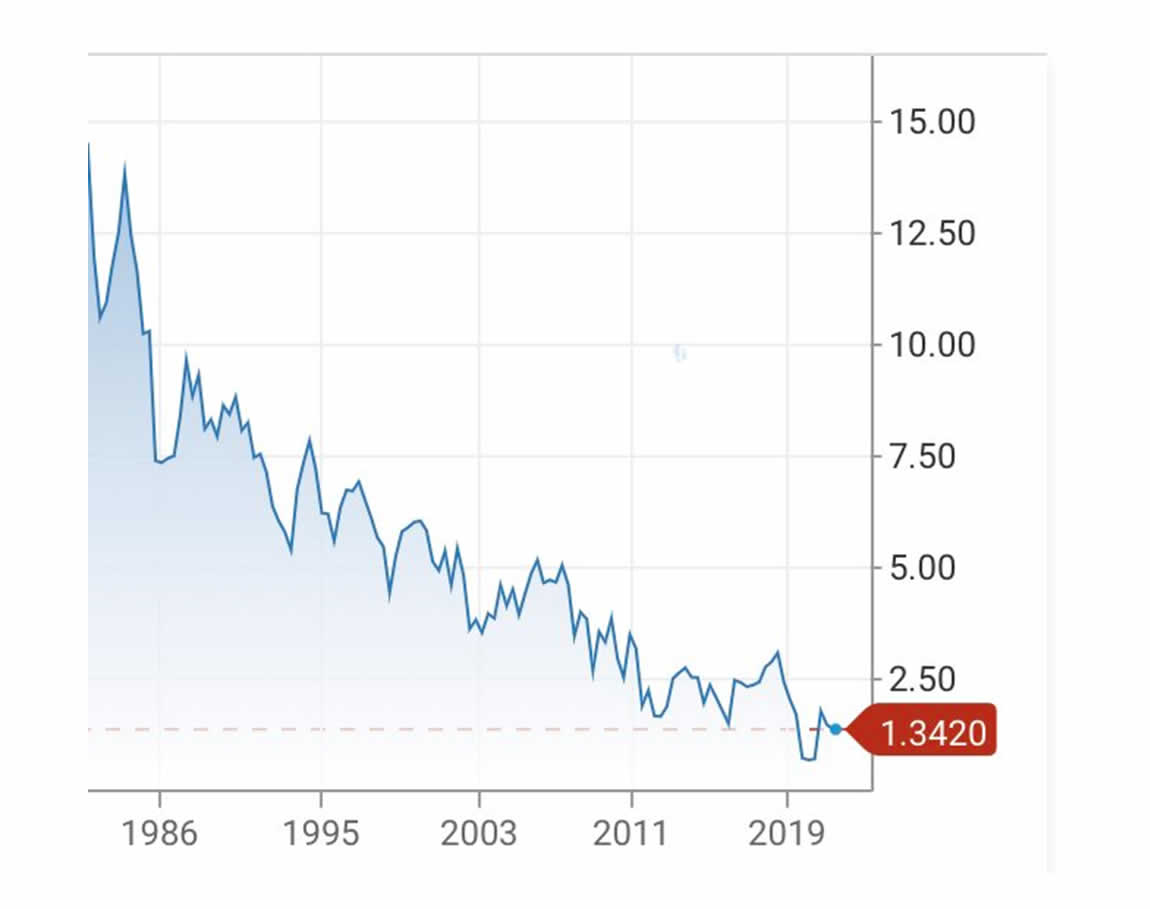 When the 10 year bond rate drops, Bitcoin tends to  follow it.  See the comparison in this chart below: 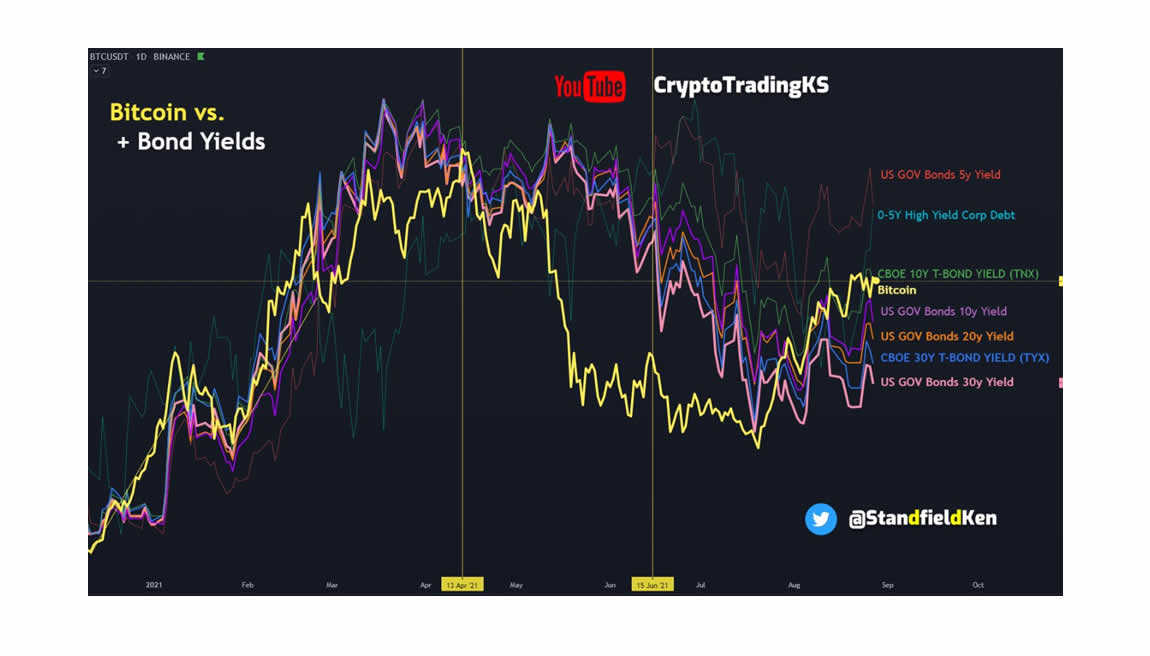 However, with 10 year bond rates steadily dropping for 36 years plus, money supply growing since 2000.  We know by looking at, and comparing these charts, that the Fed alledging they will taper buying treasuries, with rates dropping consistently for this long, means they likely will not be able to taper in 2021.  So ignore what the Fed says, and watch the 10 year bond rates, or the 30 year.  Bitcoin adoption is ahead of the internet adoption of the mid, late 90’s.  We have shown this proof in many blogs.

Raoul Pal, Steven Van Mitre, and Mark Moss all global macro experts, agree that the taper is unlikely to ever happen in reality.  The Fed does not have options anymore.  Print or collapse.  Raise rates, taper buying treasuries, will lead to a collapse.  If the taper is miner, and short term.  It could just stall the stock market and real estate growth.  So a miner taper would be (short term) bad for Bitcoin since it is a risk asset like Real Estate.  The Fed has to print and keep rates low.  Thereby, controlling the yield curve.  We expect this yield curve control to continue all year, and thus, not interrupt the Bitcoin bull run.

So, paying close attention to long term bond yields will give you another way to analyze Bitcoin.  It reacts positively to reverse repo activities and especially low 10 year and 30 year bond yield rates.  If a taper is installed to treasury buying, things would cool down.  We don’t see that option as available, so just watch those bond yield rates!

“Bitcoin is getting investors scarcity, decentralization, and security during a decade of rampant money supply inflation, totalitarian central control and security hacks!”