Bitcoin Could Be Based in Sats

Sats or Satoshis are 1/100,000,000,000 of 1 Bitcoin.  They are the penny of the Bitcoin standard.  Bitcoiners hope for the day when 1 Sat = 1 USD.  That will take a long, long time.  But every year, it does get closer.  The cartoon picture below depicts what demand would look like if Bitcoin was publicly denominated in sats on the exchanges and the media: 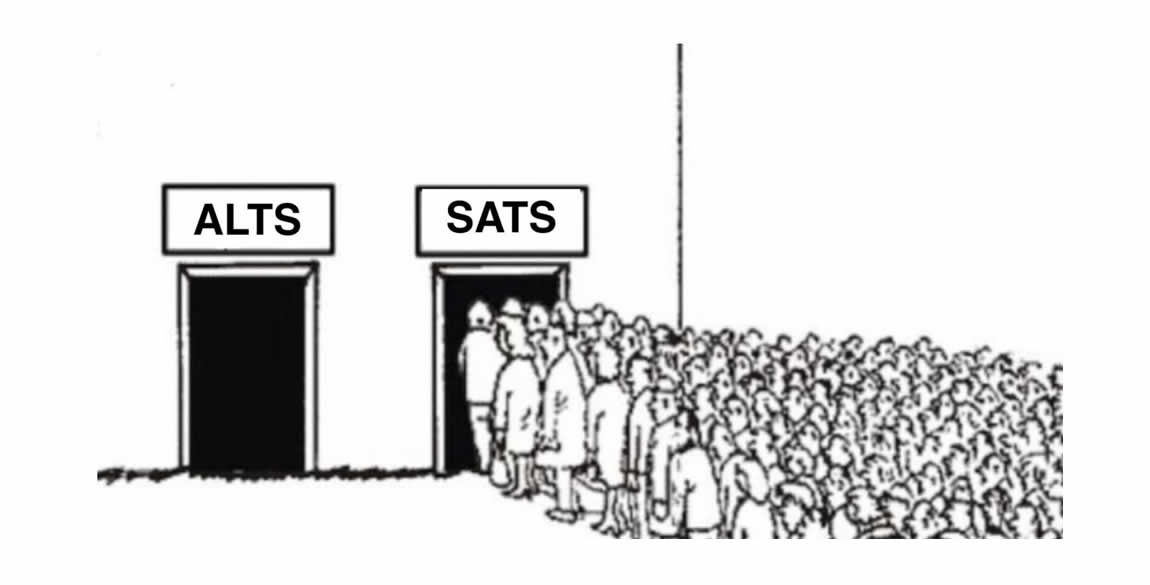 Who knows if this could get the legs in the Bitcoin public to ever actually happen.  However, if it did.  Bitcoin would compete with the Altcoins on their level.  Newbies to Bitcoin don’t like how expensive it is at $56,435 per coin.  However, consider what is happening to the USD and to the Petrodollar. USD inflation causes prices to rise, see the WSJ here.

In the below chart, many food products were demonstrated to have a 7.5% increase comparing Quarters, from one year to the next.  That would extrapolate to 30% food price inflation in one year, IF the 7.5% increase stays the same all 4 quarters: 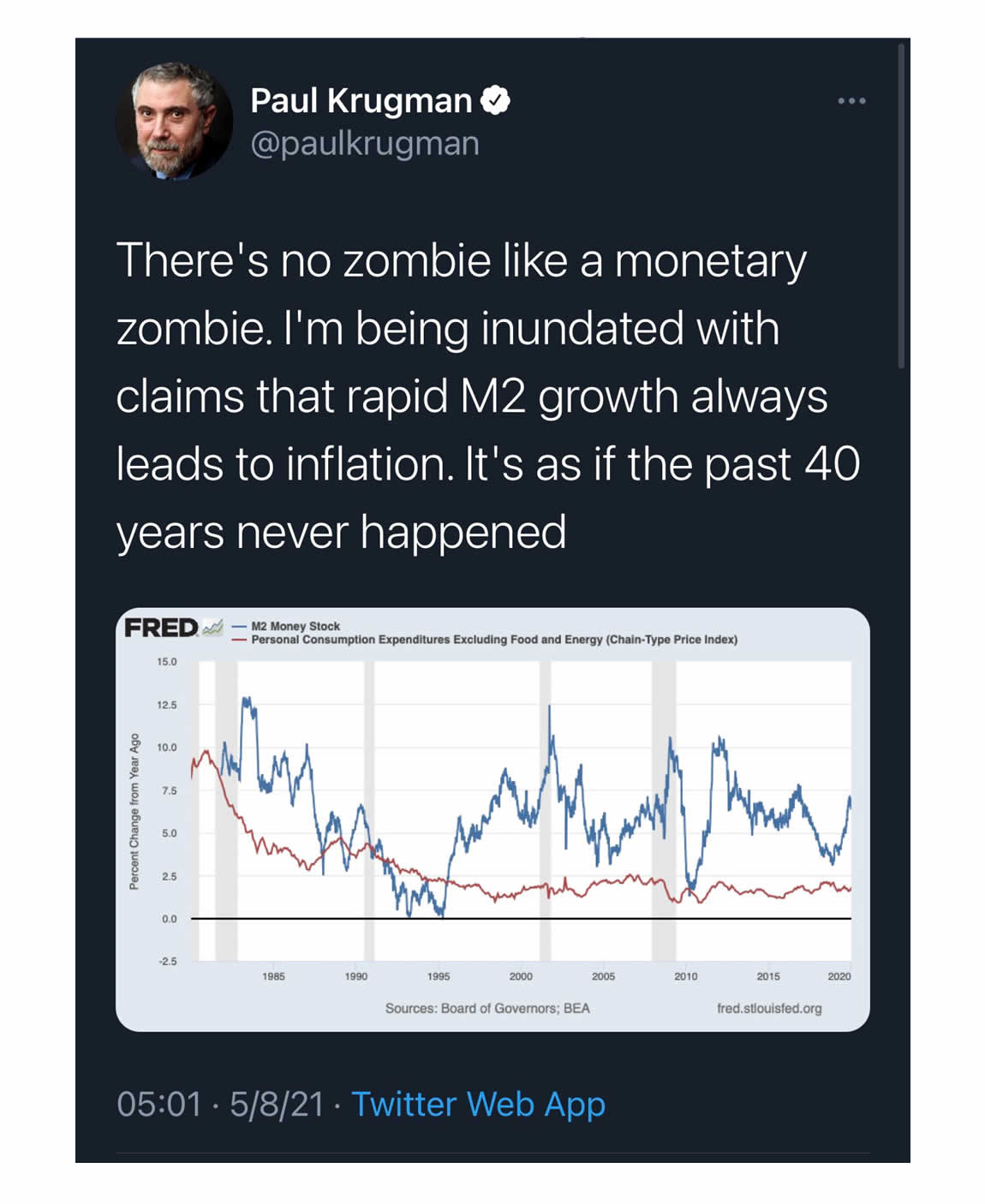 Next is the rebuttal: 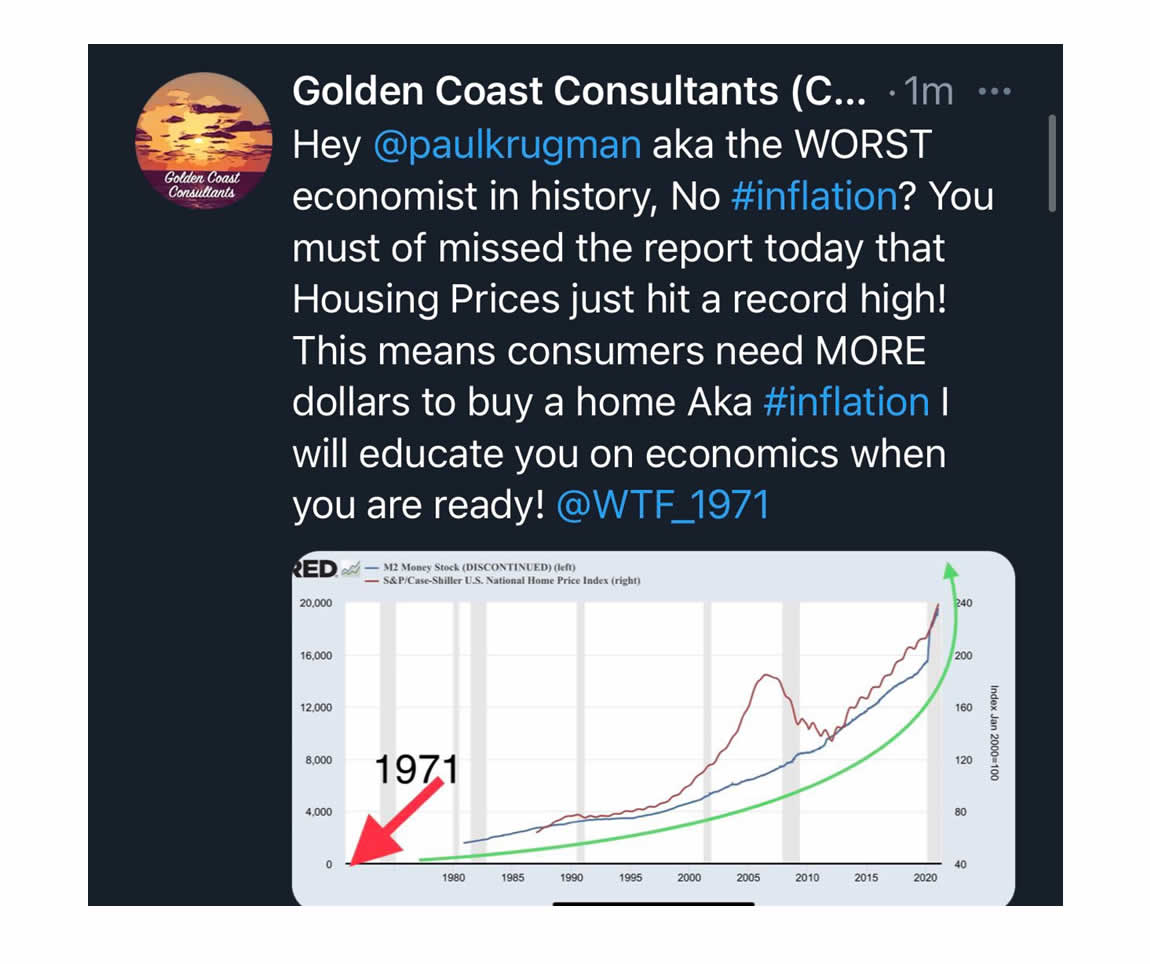 Probably 70% of Americans agree with Paul Krugman’s version of inflation.  The rest agree with the second chart.  Neutral ATM obviously disagrees strongly with Paul Krugman.  We noticed in the Paul Krugman chart it was personal expenditures EXCLUDING food and energy.  So, if you don’t eat, don’t drive, and don’t use lights, there is no inflation.  Great to know Paul!  Thanks.

We see stock prices, housing prices, food, lumber metal all jumping up at alarming rates if you track those things like we do.  The second chart above, compares MS Money stock to S&P500 and It is not a fool’s errand to do so.  Hedging against inflation, if done correctly, works better than all stocks and bonds, and better than all precious metals.  We are talking of course, about Bitcoin.

It has been exactly one year since the 2020 halving on May 11th.   Since only Bitcoin follows the stock to flow model as does Gold and Silver.  Let’s see how it is tracking as the model predicts.  After all, this model tells us what an asset is worth based on its scarcity.  Demand should and so far at least, does follow scarcity in the case of Bitcoin.  Unfortunately, Gold and Silver are so manipulated that they cannot follow in terms of price action.  Bitcoin can, because it is so decentralized away from central banks, it cannot be manipulated to the same degree.  See the stock to flow: 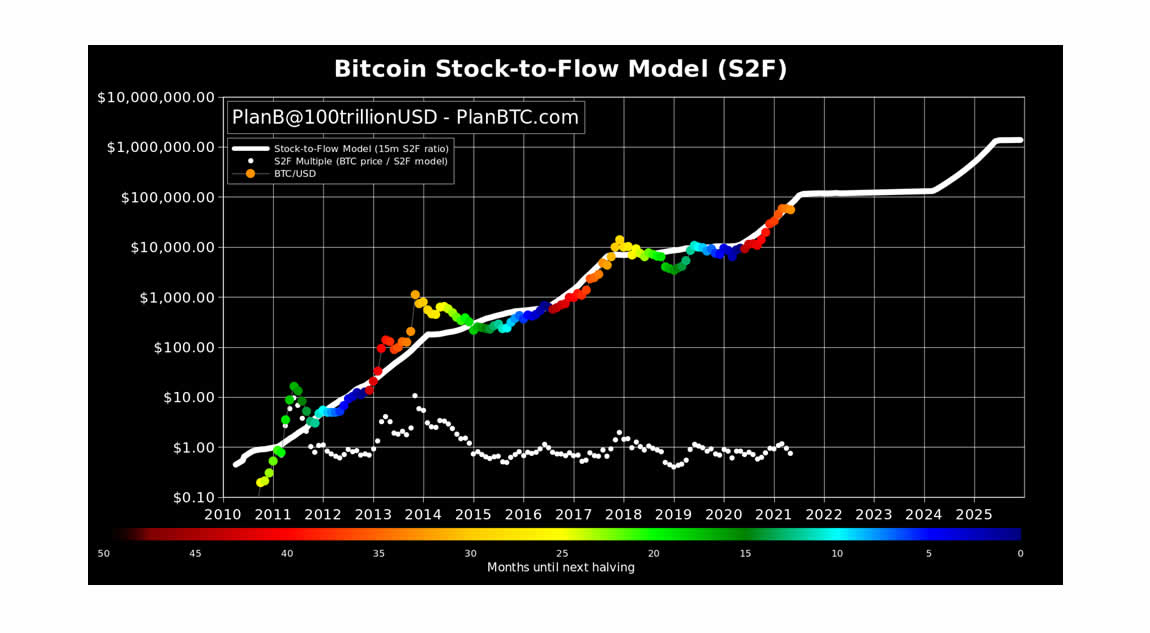 Bitcoin is on track, about $900 below the expected price on May 11, 2021 per the model above.  The next chart shows where the price action will go.  It also shows the market cap of Gold and Apple stock which are upcoming tarkets for Bitcoin to flip.  Just because Bitcoin is in a lull for 11 weeks now, does not mean it is weak and will fall.  It may very well drop to $49K later this week or weekend.  Buy the dip.  Here is what is coming: 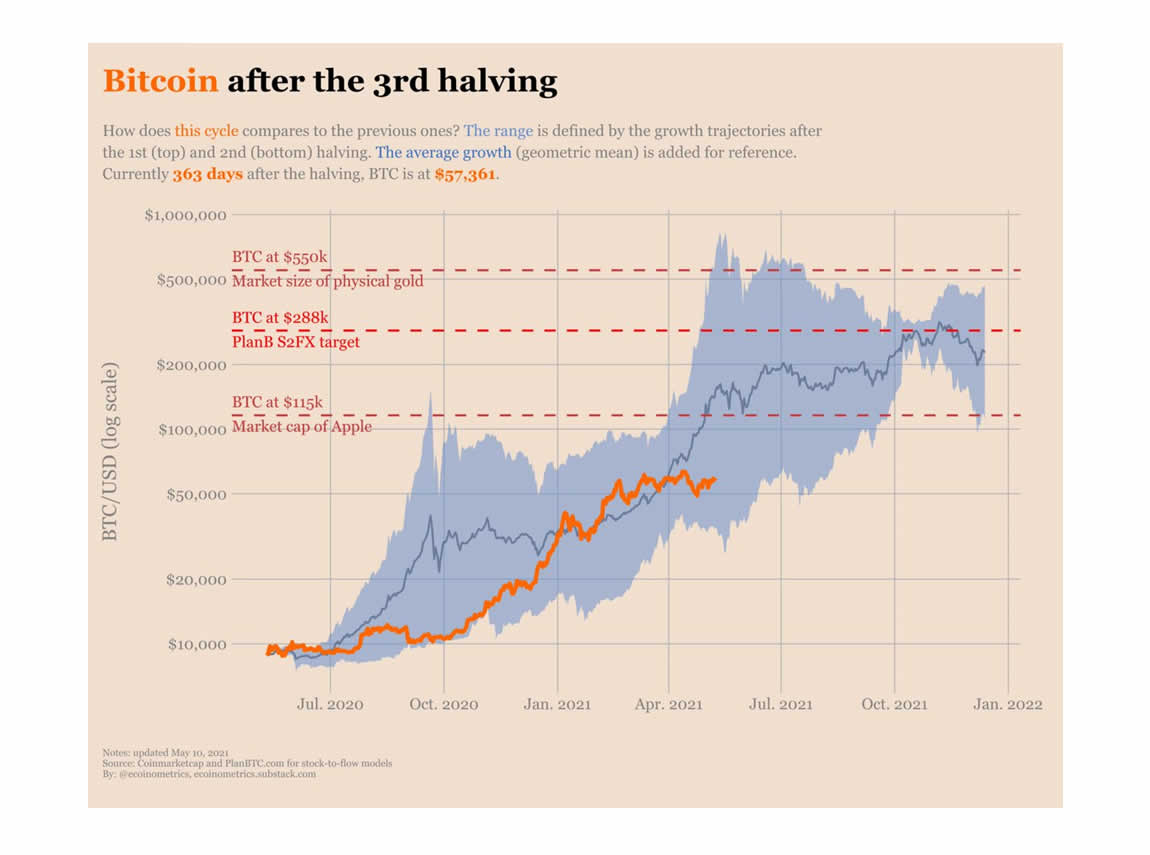 Bitcoin scarcity drags in demand after the supply shock.  Right now demand is in altcoins and getting destracted by shiny objects.  Yet inflation is a gradually then suddenly event!  See the Weimer republic in Germany before WWII.  Inflation went parabolic in a few years.  Could the US be on the precipice?: 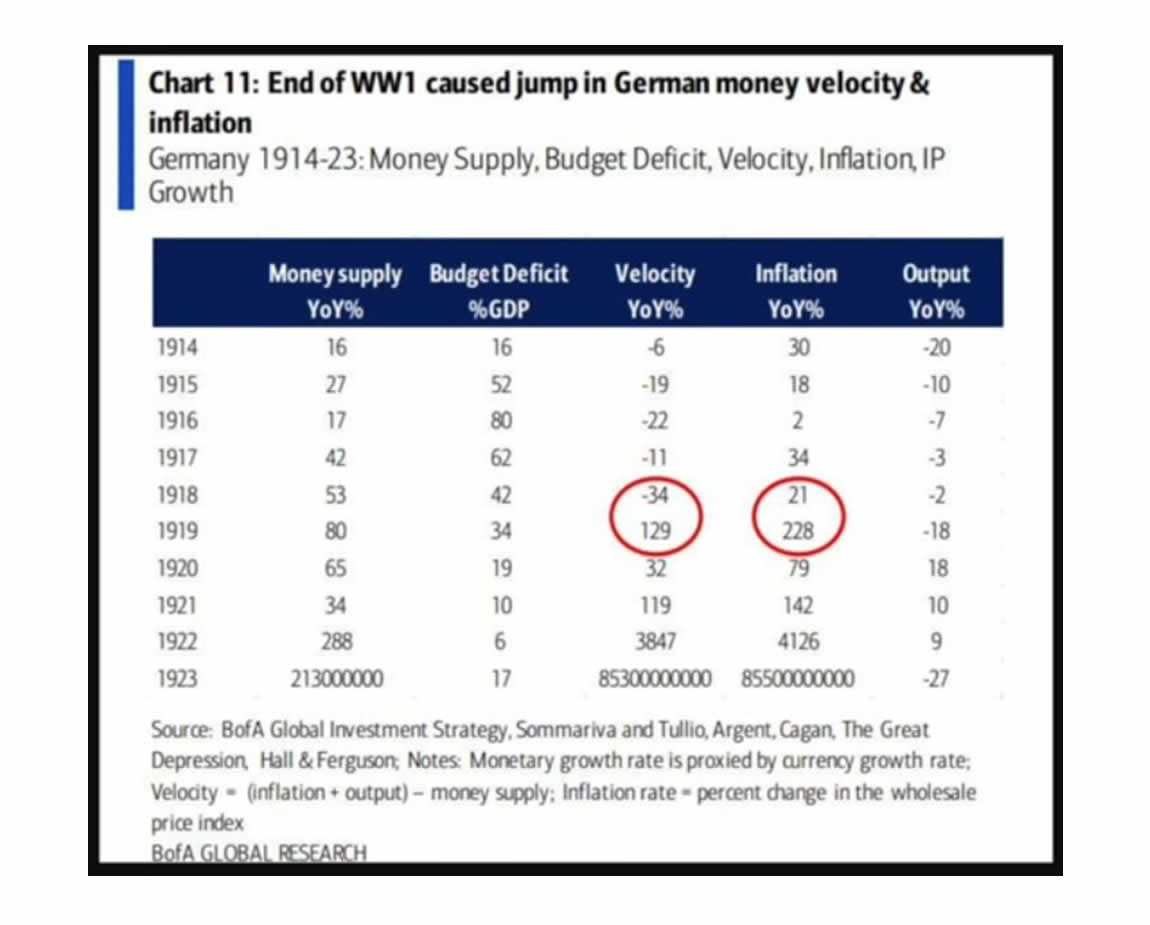 Velocity of money is picking up steam now.  When it really begins to pick up, perhaps later next year, or 2023.  What is next?  Below is a link to current M2 Velocity of Money, click here to view.

Inflation is a slow evolution, it takes a long time to percolate into the economy.  Meanwhile Bitcoin has closed above $50K every week except one since March 8th:

Bitcoin may be expensive as the name of the coin.  Satoshis being a fraction of Bitcoin would spurn demand toward the only decentralized hard money that is digital.  Keep your savings growing, during this era of high inflation.  Buy and HOLD Bitcoin!