So many things are converging at this very time.  Bitcoin is still in a mid cycle consolidation between the $64,829 ATH and the next ATH expected, most likely, in early 2022.  If the ATH is forthcoming, it will be because of the supply shock illustrated in this chart below: 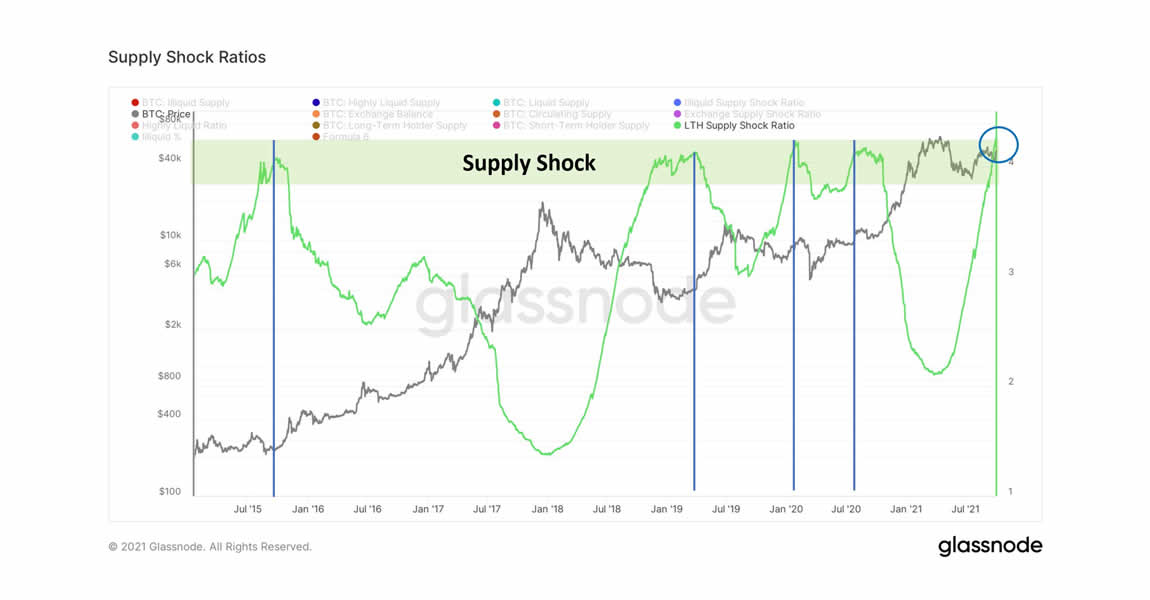 Everytime the supply shock ratio gets to these high levels, historically, Bitcoin has seen massive price appretiation.  The period between the covid 19 price dump and the 2021 ATH is an example.  The next chart gives further illustration of this: 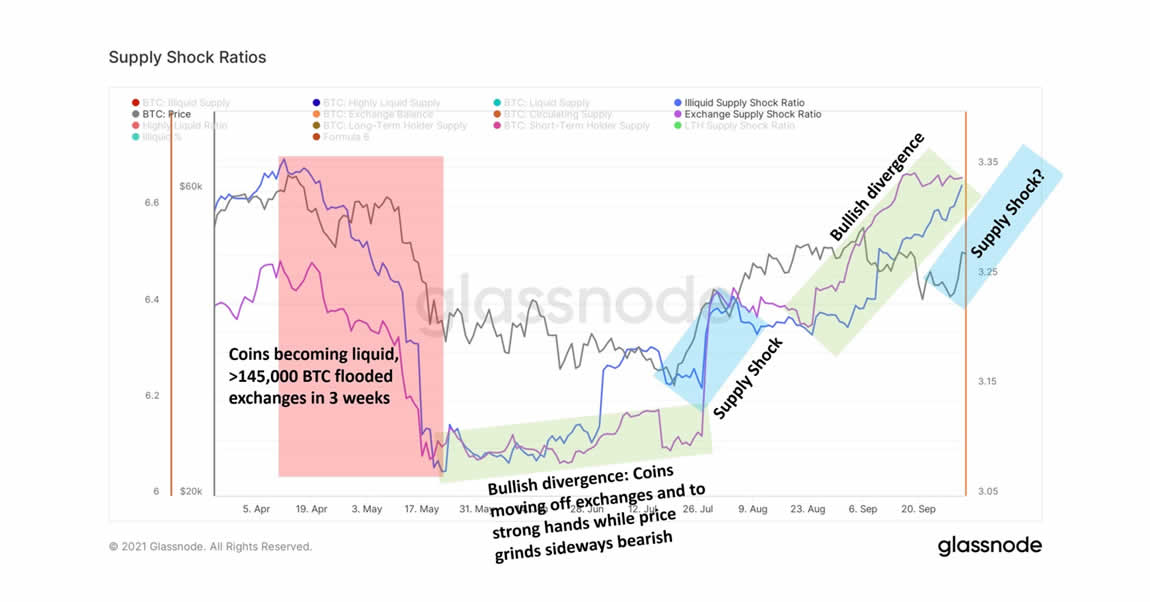 Thanks to Will Clemente for tweeting out both of these charts.  The stock to flow model and glassnode charts showing on chain analysis in charts is very helpful.  Without the dwindling stock of Bitcoin (coins left to be owned), divided by the flow of Bitcoin (coins produced per day), there would be no supply shock.  This supply shock is what on chain analysis researches and charts.  Understanding this, gives one an understanding of the buying and selling behavior of new coins and older coins.  Newer coins have not been owned for more than 6months.  Older coins have been owned for over 6 months.  It is called “long term holders supply”.  Bitcoin whales (those who own over 1000 BTC), behave similar to long term holders.  Whales drive bullish divergence and supply shocks.  They also kick off bear markets after the blow off top, at the end of a bull market.  Remember, we cannot have on chain analysis watching supply data, without believing a bear market will follow a bull market.  Neutral ATM does NOT subscribe to the idea that Bitcoin is going into a supercycle.  A super cycle means the price keeps cycling up and never experiences a bear market.  We agree that will happen at some point.  However, the S cycle adoption curve Bitcoin is in now.  Does’nt suggest Bitcoin is that mature yet.  This chart explains it:

Each bull market cycle gets a little longer.  However, that does not mean there will be no bear market.  If we are wrong about that, it will appear in early 2022, and we will adopt.  One must always stay open to adopting or tweaking an investment philosophy, if the old one is proven false.

For the short term, we can see a stochastic RSI bullish divergence in this chart below:

Basically, as long as stochastic RSI turn up at some point in the near future, a bullish pattern will emerge in Bitcoin.  We see this remaining true until January or so.  Time will tell.

Bitcoin appears to be in a bull flag, breakout or breakdown should happen in the next day or two.  Regardless which way the price breaks shorterm.  Bitcoin should remain very bullish through 2021: 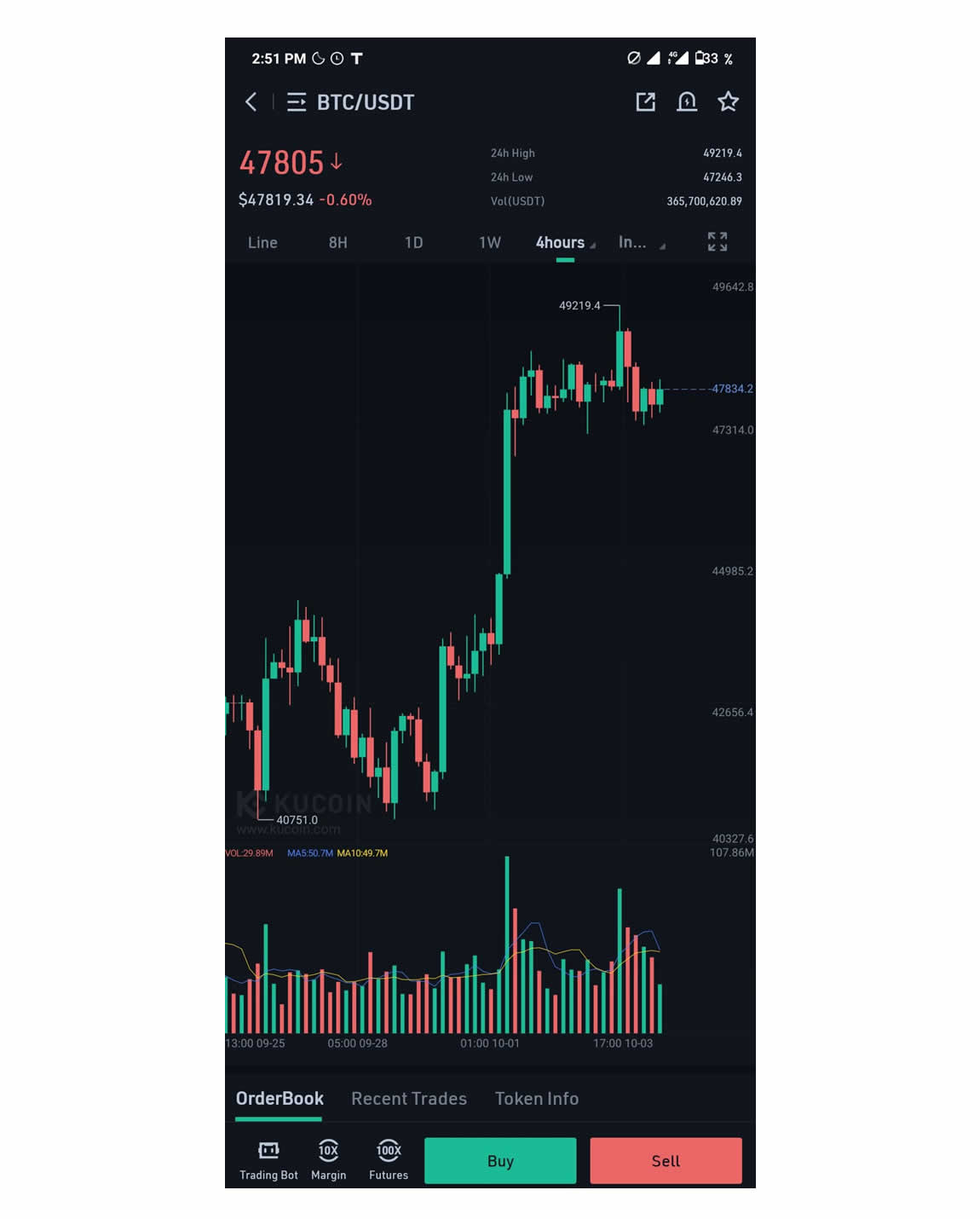 Negative interest rates are global, as per this tweet, accounting for inflation.  This fuels the fire for Bitcoin and will eventually help Gold and Silver, click here to view on Twitter.

China Evergrande is still a major threat.  We expect a stock market crash THIS MONTH, most likely.  How will that effect Bitcoin?  Long term it will help, as we have been saying for weeks now.  Scared money will land in Bitcoin, the FOMO has not begun yet!, click here to view on Twitter.

Brazil has now announced a bill to be voted on, to make Bitcoin a legal tender.  Expect a lot more of this as the monetary devaluation continues to spiral in 2021, click here to view on Twitter.

The largest Bankruptcy in financial history looms over all markets, inflation is still rising, supply chain shortages are getting worse globally, lockdowns in many countries have exacerbated this, and yet Bitcoin is in the second half stage, of it’s bull market!  Buy and hold Bitcoin!

P.S. The Pandora Papers were just released and the corruption in them is all fiat currency, tax evasion and bank fraud.  Prime Ministers from around the world hid assets and shell companies from taxing authorities.  Ukraine was the worst offender.  Bitcoin tracks every transaction on the blockchain.  Fiat currency is untraceable.  This kind of corruption is not possible with Bitcoin!, click here to read.