Palentir, Spinesmith Holdings, the Hedge Fund Goldentree, Time Magazine, and the Dutch Soccer Team are all adding Bitcoin to their balance sheet to hedge inflation and get decentralized.

Even Neuberger Berman a $161 Million commodity fund is allowing portfolio managers to buy Bitcoin as an inflation hedge.  Brevan Howard ($13.7 Billion in AUM) Hedge Fund just announced today, they are adding Bitcoin to their balance sheet for clients.

This is the smart money.  They know the global monetary system is devaluing currency.  Central Banks are out of options.  Europe already has negative rates for bond yields, the US is near zero with no option to raise rates for the forseeable future.  They can taper treasury purchases, but yield rates cannot be touched.  The outcome from that would tank stock markets and real estate.  So printing, QE, reverse repo, those are the central bank options.  They’re hands are tied.

We did not get the chance yesterday, to mention that technology (FAANG stocks) are deflationary.   They force prices lower (electronics, cell phones, computers, software).  That does not mean that inflation is not a risk.  It means money supply must grow to offset this deflationary aspect of the US economy.  So if deflation comes in the form of a stock market crash, we see this as inevitable.  The DXY index will run up, Gold, Silver, and Bitcoin will as well.  Recall, we have gone into detail in previous blogs about zombie companies buying back there own stock for years now.  This is unsustainable and P/E ratios are near all time highs and still climbing.  We see Bitcoin being the biggest beneficiary of a deflationary crash.  Tapering treasury purchases by the FED would be deflationary as well.  The overall devaluation of the USD by FED policies, would also eventually lead us to a deflationary stock market crash.  Which would bleed into real estate as well, and in a major way.  We see inflation, deflation, the devaluation of the USD all being interlinked together.  They act as a catalyst for Bitcoin and the Altcoins as well.  Yet, altcoins are not decentralized.  So if this crash is heavily linked to FED policy which it should be, then the safe investment to branch out of that will be decentralized investments.  Central planning has caused these problems.  Decentralized investments detach the investor from the issue.  That is the desired outcome and that brings us back to Bitcoin.  We already discussed that Bitcoin is property while Altcoins are securities in most cases.  Altcoins can be controlled by central planners.  Bitcoin is the original blockchain.  Built on proof of work, programmatically decentralized.  The decentralized nature of Bitcoin, and it’s scarcity, will funnel investors to Bitcoin if there is such a stock market crash.  The double top bull run would run up higher than the $160K to $220K we have been predicting for months.  Here is a Real Vision chart comparing the 2013 bull run to where Bitcoin is tracking in 2021.  It is very close: 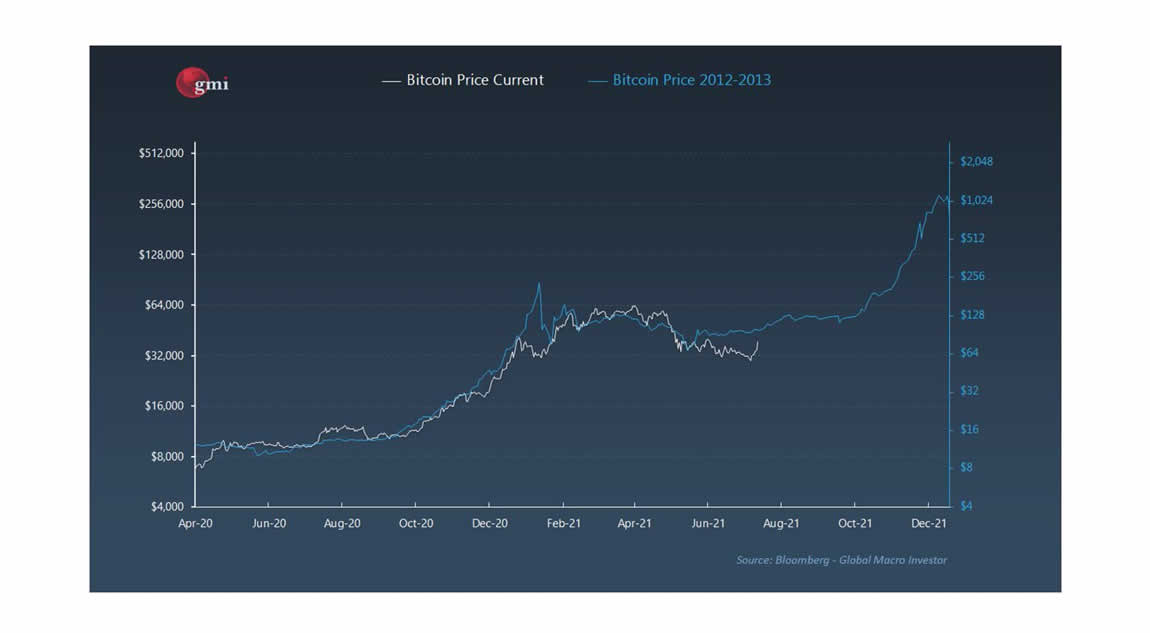 If anything we can see a crash this fall catalizing into even more parabolic price action as Bitcoin is the only viable, decentralized safe haven.  Baby Boomers may stick with Gold in some cases, however, that generation has a lot of savvy investors, that have been keeping up with the digital economy.  Do the research, put in the time.  Build a thesis and invest that way.  This is what the Ray Dalio’s of the hedge fund world have been doing.  Bitcoin is looking for a breakout from the mid to high $40’s price range it has been in for three weeks.  Stay patient and stay long term, zoom out.  Bitcoin has a looong way to go for this bull run.  Stocks are tetering on the abyss.  We may be wrong but we are in the camp now, that they will go over the abyss this fall.  Bitcoin may have a dip with them, but short lived.  So stay patient with Bitcoin.