Bitcoin Brings Freedom To The World!

Why do we keep saying the price of Bitcoin does not matter?  The overall reason is that there are 7 Billion unbanked people in the world.  This majority of humanity is not participating in the asset appreciation spurned by central bank balance sheet growth, and money printing worldwide.  The assets that are growing most are Bitcoin, Ethereum, Real Estate, Stablecoins, and the stock market.  Bonds are negative yield ($119 trillion market cap worldwide, $46 trillion market cap in the US).

We have already seen a wall of money come into Bitcoin.  We see Ethereum as a distant second, which does not have the decentralization of Bitcoin.  Therefore, can it be trusted?  Bitcoin is the standard for digital currency, hedging the central bank.  It is decentralized, with a hard cap of 21 million coins.  No other crypto currency has that feature.  The blockchain Bitcoin is built on, is the most secure network in the world.  Now, we have the lightening network to bring decentralized finance, Defi to the unbanked.  This is why the President of El Salvador, Nayib Bukele, and the Senate, voted in favor of Bitcoin as a legal Tender in El Salvador.  It is most definently coming to other countries in Latin America as well.  African countries may come into this later on.  It will spread much like corporations putting Bitcoin on their balance sheet did, after MicroStrategy first did it last summer.  To us, investing in Bitcoin is an accumulation game.  We believe.  Thus, we accumulate and do not sell Bitcoin.  We may exchange some small percentage of our Bitcoin for some Real Estate at the top of the bull market.  But, by and large, we are keeping our Bitcoin long term.  We are retiring on it.  We trust Bitcoin to outlast fiat currency in this war of attrition.  It averages 220% annual return since 2009, and that number is going up this year most likely.  If a villager in Africa can buy this on his or her phone and tap into this peer to peer monetary network, outside the clutches of any central bank.  How is that not freedom.  Villagers in Africa, can now, store wealth digitally and if they have the means.  Store it on an offline wallet for safe keeping.  That brings financial freedome.  Every $1 (USD) saved, will be worth $10 (USD) in 4.5 years or so.  The villager in Africa just has to stick to it, and keep holding and storing their Bitcoin investment.  Bitcoin ATM’s going anywhere and everywhere is financial inclusion not financial wealth disparity.  Private money printers like any central bank is, creat wealth disparity.  Only those close to the money printer have wealth.  The rest are on the outside.  So, Bitcoin is financial inclusion!

Yesterday, we showed the stock to flow chart and how this re-accumulation period Bitcoin is in rhymes perfectly with the 2013 bull run.  We will see how this plays out.  We are convinced this bull run now, is FAR from over.
Below is the Bitcoin hash ribbon chart, which shows buy signals when the 30 day average crosses above the 60 day average.  Look for that cross in the future on this chart:

When we see the 30 day cross above the 60,  we can expect the second top to start forming during this bull run.  The next chart below shows that there are always 2 RSI tops during each bull run.  For this years bull run we have only seen one.  Expect the new ATH (all time high) to occur after the RSI increases above 90 again later this year.  See the chart below: 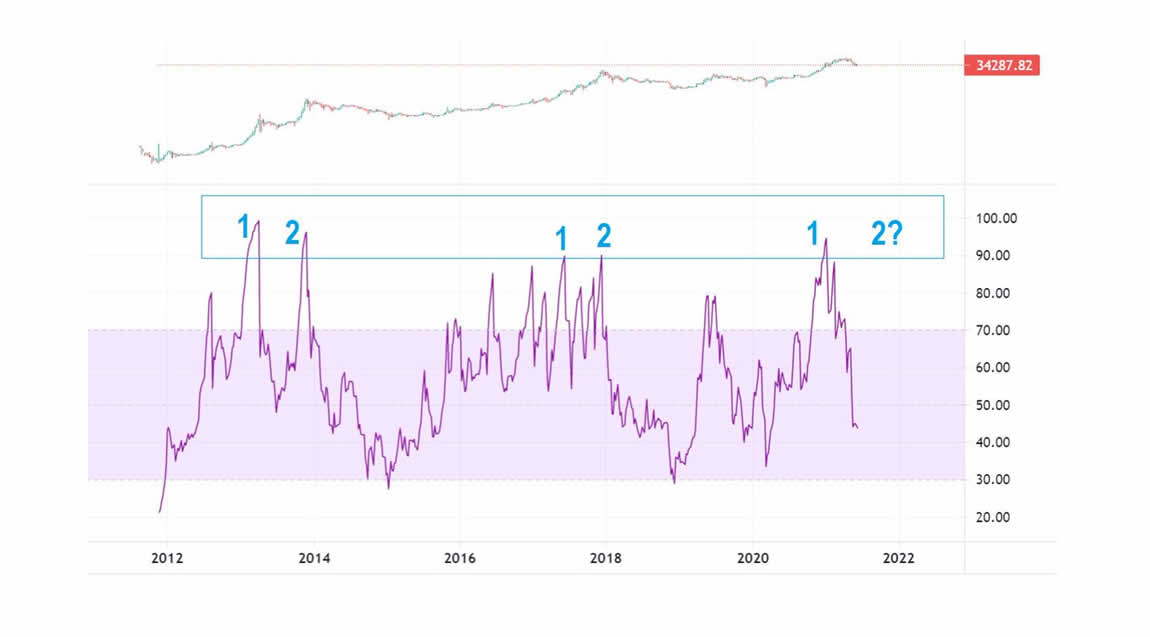 Notice the green and red line above this chart, above.  In this bull run we obviously hit one top at $64,829.  RSI was over 90 back then.  It’s been 6 weeks since that top.  Notice how rounded this first top is compared to the sharpness of the first 2013 bull run top.  This tells us Bitcoin is getting more mature, hence the wall of money that has been coming in since late 2020.  Expect Bitcoin to remain in an upward bound range until the next breakout.  The next chart looks at stablecoins like USDT (tether).  As circulating supply increases, that is a leading indicator for Bitcoin price.  See the chart below: 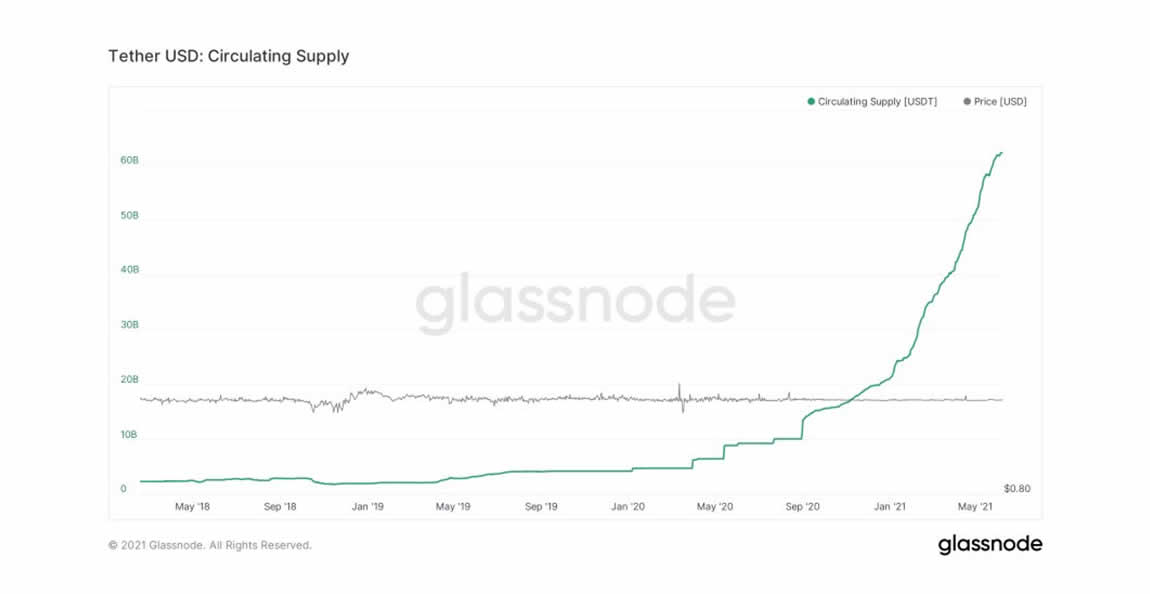 See how the green line (tether) has more recently straightened out.  When it curves up sharply, Bitcoin will begin it’s parabolic rise up.

The mining bans in China, along with other FUD towards Bitcoin recently is definently prolonging this bull run, in terms of time.  Do not expect the bull run to end over FUD from the media.  All that is doing, is prolonging the time it will take for Bitcoin to hit the top of the bull run for this 2021 cycle.  2013 had a 4 month long re-accumulation period between it’s double tops.  The second top being 5.5X what the first one was.  As we keep saying history does’nt repeat, but it rhymes, and we see at a minimum a 3X jump from the April 15th top of $64,829.  In closing, Bitcoin may stay rangebound all the way through mid or even late August.  Eventually, and we really don’t know when right now, it will turn parabolic again.  The hashribbon and RSI charts are very good indicators.  They are not showing us when they will turn yet.  When they do, look out for a big move up.  It is not an if, it’s a when.  Keep in mind, when the second top is hit, Bitcoin will fall off and consolidate all of 2022, after the top is reached.  So, we wait.

Back to the freedom discussion.  Freedom is why we own Bitcoin.  The price will stabilize when adoption of Bitcoin surpasses 1 billion people.  It’s just over 110 million right now.  It has a long way to go.  There in lies, what we who own it, must do.  Educate, not about the price, about the freedom.  When an investor buys Bitcoin, they are investing in the greatest freedom investment man has ever invented.  They become detached from central bank control because the blockchain is voluntary and it is peer to peer.  Not government to government, like fiat currency is.  If you live in Texas and your going to London for a week.  You don’t need to haul 2 more suitcases for your money like you would if you brought Gold!  You can hold $1 billion worth of Bitcoin in a credit card sized wallet (ex. trezor or cold card).  Bitcoin manages and tracks every coin in circulation on the blockchain.  The blockchain is the most secure network, because miners must prove their work to win a block of Bitcoin.  Once they win one, it gets added to the chain, digitally.  This proof of work keeps security high, especially because of the difficulty adjustment.  Mining blocks is regulated through the difficulty adjustment.  They get faster or slower to mine, due to this adjustment.  This is why the coins can always be accounted for and tracked.  Mining blocks can be done using renewable energy (solar, wind, steam, natural gas).   Excess or waste energy from these sources can be utilized to mine Bitcoin.  With that being true, any FUD saying Bitcoin is environmentally insensitive is wrong!  In El Salvador where it is now legal tender.  Bitcoin can be mined from the steam from volcanoes.  Power Plants create steam which can easily be converted to Bitcoin mines.  Here is a volcano in El Salvador that will be mining Bitcoin to stop waste emissions and create a new income stream.

Nayib Bukele
I’ve just instructed the president of @LaGeoSV our state-owned geothermal electric company), to put up a plan to offer facilities for #Bitcoin  mining with very cheap, 100% clean, 100% renewable, 0 emissions energy from our volcanos 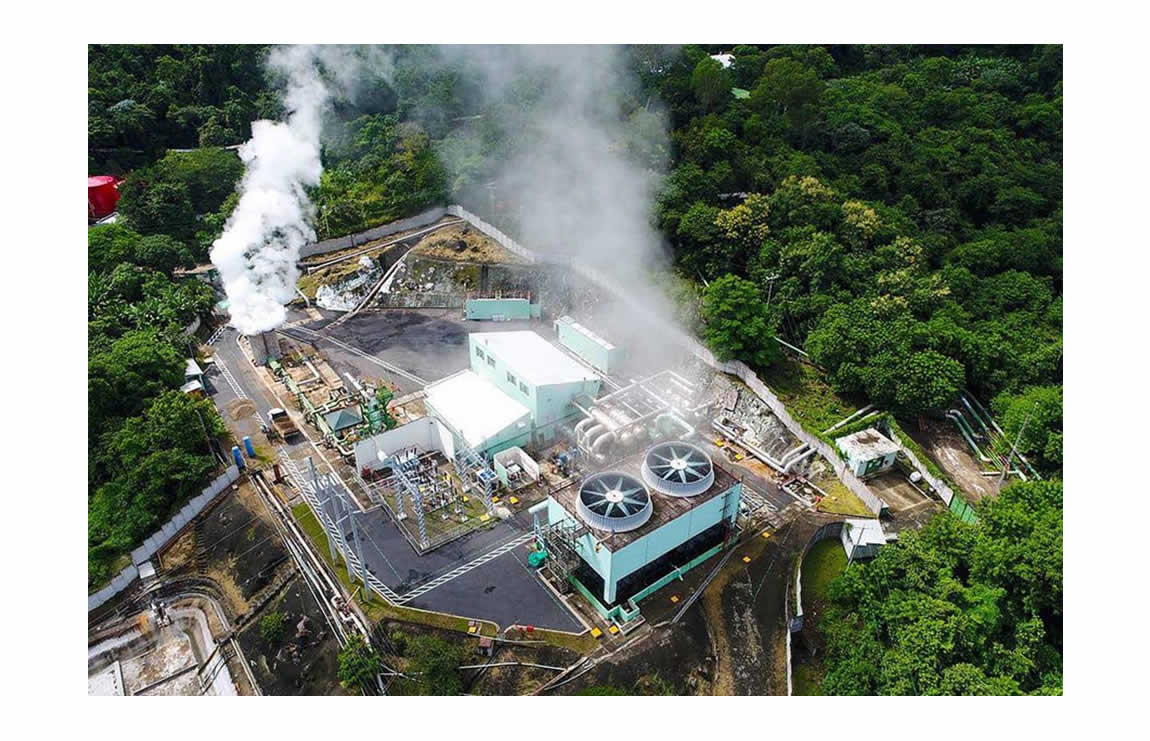 The rest will be history someday.  Before the Bitcoin 2021 bull run kicks into high gear.  Buy yourself a piece of freedom.  Hold Bitcoin longterm.  It cannot be confiscated from you unless you broke the law, and used illegally gained money (ie. Drug or sex trafficking), for Bitcoin.