With BRICS nations adding Argentina and Turkey, making it 7 nation states and half of the global population.  BRICS nations have the power now, to update the global reserve currency.  Here is an article about how Bitcoin will be used along with a basket of commodities, for cross border payments, click here to view on twitter.

The reason that the BRICS nations have begun to band together to fight the contral banks, is that Russia and very soon China, will get sanctioned by the G7 nations.  This sanction has meant, cutting off their currencies from the SWIFT banking system.  Therefore, Putin and Xi are working on creating a new global reserve currency to replace the US dollar.  This replacement is only due to the sanctions placed on the Ruble, and China expects the same sanctions against the Yuan after they invade Taiwan.  Cutting off these countries from the Swift banking system has created the total reliance on Russia for Germany and Europe.  Without Russian Natural Gas, Europe will not be able to heat homes this winter: 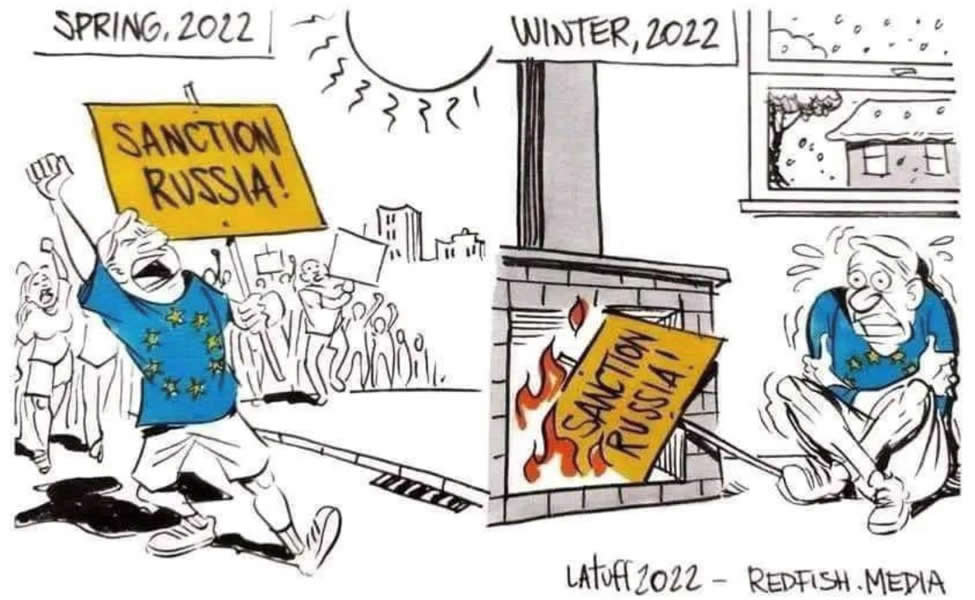 Xi meeting with Putin and Modi now in Uzbekistan.  China supports Russia and understands it’s position.  China expects sanctions after it invades Taiwan.  They are discussing the new reserve currency the BRICS nations are putting together.  This is also why Modi from India is there and a part of this meeting.  They are unified that a multipolar world is the goal not a unipolar world.  Thus, they are fighting for nationalism and against globalism.  Below is a brief summary of what globalism brought the world so far, since 2020.

Central banks printed trillions to avoid a recession.  This led to 10% CPI inflation and 20%+ real inflation.  Now, they are raising rates to lower inflation.  This will lead to a recession or a depression!  The pandemic fits in to this but it is impossible to discuss Covid 19 without going political.  We just state that Covid did not come from an open market, but rather a lab in Wuhan.  It stands to reason globalists were part of this.  However, to go into great detail about this, defeats the purpose of this blog.

Bitcoin is a scarce hard asset as Gold and Silver are.  It Gold and Silver are part of the basket of commodities, and we know they are, then Bitcoin will be used for cross border payments.  We know this from what Putin and diplomats have said about Bitcoin.  If they are using precious metals and Bitcoin as the backing for their reserve currency, Gold, Silver, and Bitcoin will benefit from this.  If all BRICS nations adopt this reserve currency, which they will if it is approved.  That would add 7 nation states to the 3 that have Bitcoin as a legal tender.  We know Bitcoin is at the bottom of it’s bear market right now.  Just like 2018 and 2014.  Bear markets are always in 4 year increments and 1,085 days from bottom to top.  See this chart below for a historical perspective on Bitcoin price action:

It is lower, but that simply means buy and hold Bitcoin longterm, and do NOT trade it!  If you do, you will lose, guaranteed.  The grifters pushing Bitcoin and Crypto trading make money on their subscriptions and advertising.  Not so much on actually trading.  We have also found that Silver is easier to find in the physical form than Gold.  Silver Mountain Resources is a great junior miner from which to seek an investment in mining Silver!  We use Silver coins as a store of value.  It is much easier to obtain Bitcoin and store large quantities of it without a physical vault in your basement.  Therefore, we suggest continuing to hold and accumulate Bitcoin.  We are just mixing in some Silver and we may pick up some Gold as well.  We expect excellent returns on Physical precious metals or quality junior minors.  Do not buy paper Gold or Silver!  We are not financial advisors and this is not financial advise.  Stay calm and keep a long time horizon.  This economic environment is going from bad to worse!  Prepare now!