As was expected and demonstrated in this graph below.  Bitcoin has broken out of its 5 weeklong consolidation pattern and confirmed the breakout to the upside.  The resistance was $11,000 to $11,200 and that is still affecting the breakout for now: 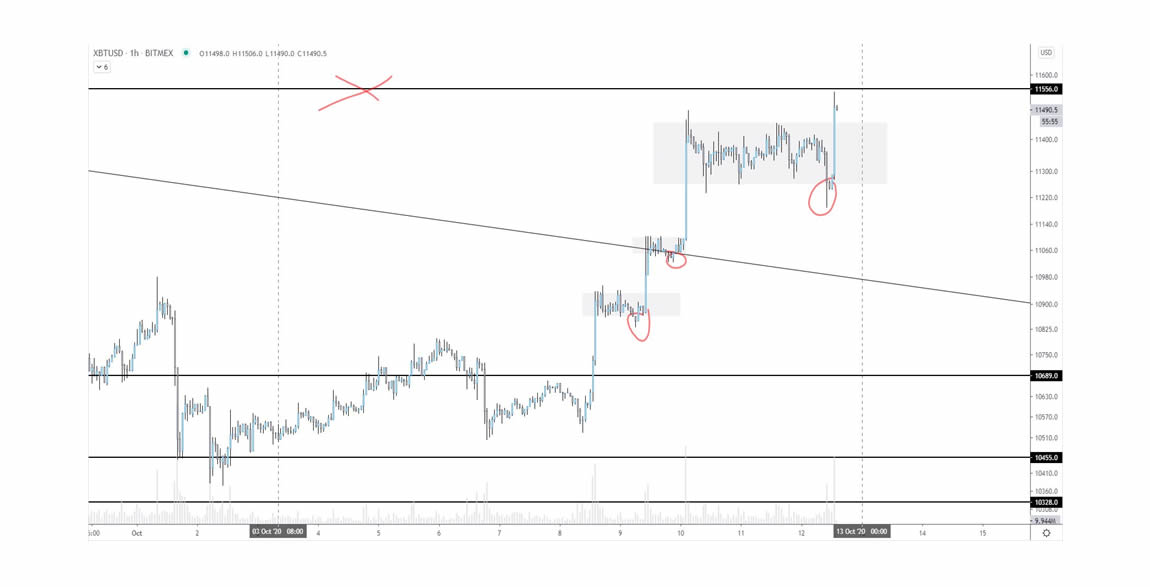 It appears Bitcoin will keep climbing and attempt to break $12,000 this week.  The effects of this looming election are still hazy right now.  Will another event come up before November 3rd?  What will the outcome of the election have on Bitcoin?  We do know the Central Bank will keep printing their way out of this regardless who wins.  There is no way and zero chance they reverse course and do as Paul Volker did in the 70’s and 80’s and allow interest rates to climb to stop deflation.  Since we know and it is well proven that technology is deflationary, the US economy is stepping closer and closer into Stagflation where we never see inflation from Quantitative Easing (money printing) but instead see high unemployment and stagnant GDP growth with out of control Debt to GDP ratios, click here to see - https://fred.stlouisfed.org/series/GFDEGDQ188S.

Also, the GDP is negative 31.7% through Q2 2020, recently updated by FRED, click here to see - https://fred.stlouisfed.org/series/GDP.

The above graph really stands out to show how dramatic the drop in US GDP is looking at the steady climb since 1945.  Never has GDP taken a hit like this since 1945.  But at the same time M2 Velocity of Money has dropped 67% since 2008.  This came up 10 days ago in a previous blog.  Regardless of the elections outcome money printing does not appear to be slowing down.  The congress is still negotiating a stimulus package this week despite a rejection by the Democrats of the $1.8 Trillion level.  We have stated over and over it will end up $2 Trillion plus.   At that point, after the stimulus, the Fed will have printed over 33% to 34% of the US Dollars in circulation worldwide in 2020.  This level of currency printing is a precursor to hyperinflation.  Neutral ATM does not necessarily think we get there, we sure hope not.  However, there is a strong correlation between % of circulating currency printed in a year and hyperinflation.  Examples of this include, Argentina, Greece, Lebanon, Zimbabwe, Venezuela, Germany in the 20’s, Iran and many poor countries in Africa.  In the 2nd Quarter of 2020 the Fed printed more money than the previous 90 years in US history!  The Fed is the largest landowner in the World with 60% of mortgages on the Fed’s books.  UBI
(universal basic income) could be coming with the Fed putting digital money directly into Fed bank accounts of citizens.  Many of the worst performing stocks are bank stocks.  Most banks won’t survive this.

However, many tech companies are more forward looking, they see the “writing on the wall”.  Case in point.  TESLA.  They just put 3 Bitcoin ATM’s into their Nevada Giga Factory, click here to read - https://www.btctimes.com/news/three-bitcoin-atms-inside-tesla-gigafactory

Neutral ATM is attempting to educate and prepare people for what is to come.  None of us knows where this ends.  Bitcoin will be a big factor, as will Gold and Silver.