Bitcoin: Blackrock offering spot Bitcoin to clients via a Trust

This was supposed to come out Friday.  Blackrock the world’s largest institutional investor is now offering a Trust to their clients with which to buy and hold physical Bitcoin.  This is very much like an ETF.  Barry Silbert of Grayscale has stated this trust from Blackrock is better than an ETF.  Below is an article about this news and a Blackrock announcement, click here to view on twitter.

BlackRock is committed to providing clients with access to their choice of investment opportunities and has launched a spot bitcoin private trust. The trust is available to U.S. institutional clients and seeks to track the performance of bitcoin, less expenses and liabilities of the trust. Despite the steep downturn in the digital asset market,1 we are still seeing substantial interest from some institutional clients in how to efficiently and cost-effectively access these assets using our technology and product capabilities.

Bitcoin is the oldest, largest, and most liquid cryptoasset, and is currently the primary subject of interest from our clients within the cryptoasset space. Excluding stablecoins, bitcoin maintains close to 50 percent of the industry’s market capitalization. 2 BlackRock is encouraged that organizations such as RMI and Energy Web are developing programs to bring greater transparency to sustainable energy usage in bitcoin mining, and will follow progress around those initiatives.

BlackRock has been conducting work in four areas of digital assets and their associated ecosystems where we see potential to benefit our clients and capital markets more broadly, including: permissioned blockchains, stablecoins, cryptoassets, and tokenization.

BlackRock recently announced a partnership with Coinbase that will provide common clients of Aladdin and Coinbase access to the digital assets trading lifecycle through connectivity between Coinbase and the Aladdin platform, starting with bitcoin. Leveraging Coinbase’s comprehensive trading, custody, prime brokerage and reporting capabilities, common clients will be able to manage their bitcoin exposures alongside their public and private investments.

It will take a while for the effects of this to become evident.  Bitcoin broke above $25K and has now fallen below that level.  It closed out the second straight week above the 200 day moving average, which is a very bullish sign.  Here is more information about Alladin, the Blackrock software users use to buy assets, now including Bitcoin: 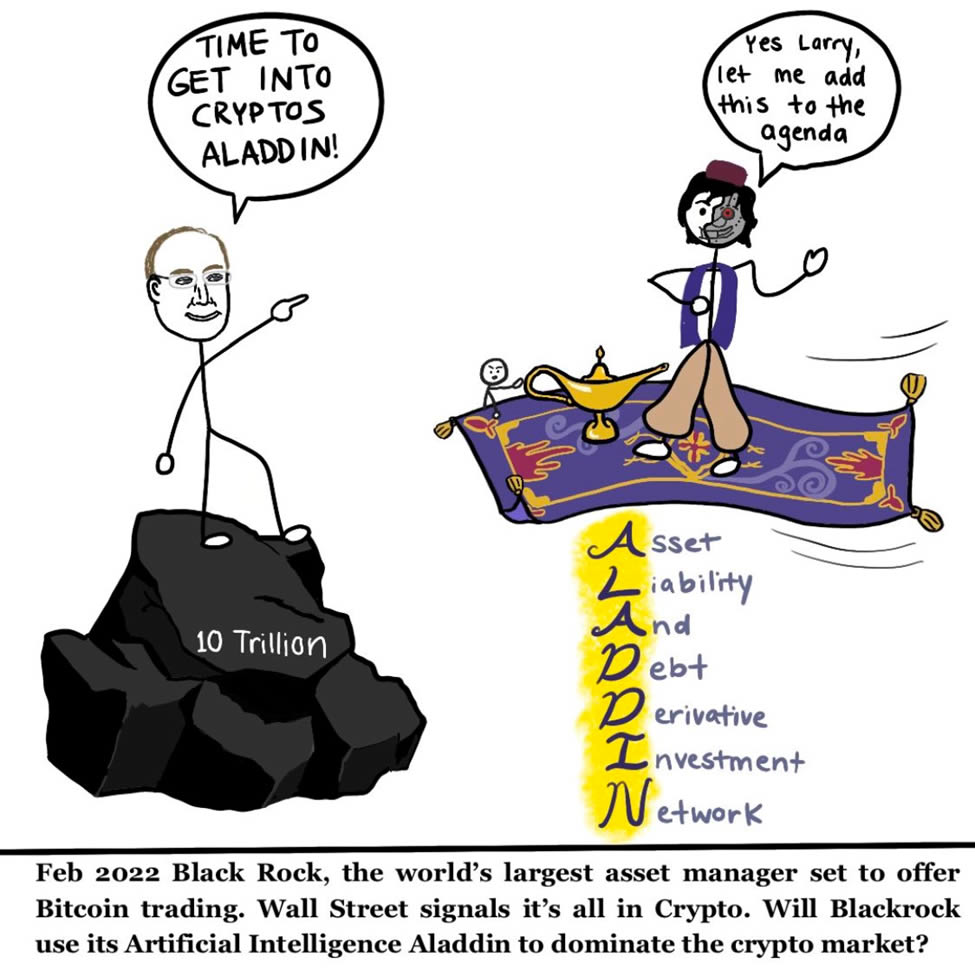 Now we have to ask the question, will Blackrock manipulate Bitcoin.  It has manipulated real estate, equities, why not Bitcoin?  Continued manipulation is inevitable.  Expect bear markets and bull markets to be less severe from now on.  Bitcoin is slowly becoming a risk off asset.  This will drive that to fruition.  Sheer adoption of Bitcoin, which pales in the face of CBDC will drive the price higher!  Bitcoin will become a much higher priced asset that will be held as a store of value.  Blackrock will price Bitcoin out of reach of many middle class Americans and Europeans.  Satoshi’s which are a 100 millionth of one Bitcoin, will, at some point, become the unit for buying and holding Bitcoin.  This may take a decade or two to come to fruition.  The point is, Bitcoin has the greenlight now, from institutional investors to go main stream.  The issue is, will the population accept Bitcoin over CBDC?

This article below explains the perils of CBDC.  Many smart writers like James Rickards have, and continue to predict that banks will collapse at some point.  He wrote “The Death of Money” in 2014 predicting what is now happening.  We already see major European Banks preventing Bank Runs by not allowing access to accounts.  It is far worse in China!  Now, CBDC is being propped up as the replacement for fiat currency.  Here is an assessment of CBDC and what it brings to the table, click here to read more.

Now compare CBDC to Bitcoin.  Bitcoin is decentralized because every miner, and every node operator in the world keeps Bitcoin afloat.  Governments cannot shut it down, because there are too many millions of operators of this equipment, creating blocks on the blockchain every 10 minutes.  Since Bitcoin has checks and balances like the difficulty adjustment, quantum computers will have zero ability to take over Bitcoin.  As computing power gets faster and faster, with quantum computing, the difficulty adjustment keeps blocks being solved in 10 minute increments.  As long as that never changes, it will take 118 years until all of the allocated Bitcoin on the protocol is mined.  The year 2140.  This is what keeps Bitcoin decentralized and Blackrock cannot control it.  As the public becomes aware of the perils of CBDC, the reciprocal asset to CBDC is Bitcoin.  We firmly believe the freedom, and decentralization of Bitcoin is what will eventually lead to mass adoption globally.  HyperBitcoinization!

We can see the volatility of Bitcoin slowing down over time in a chart going back to 2012, see below: 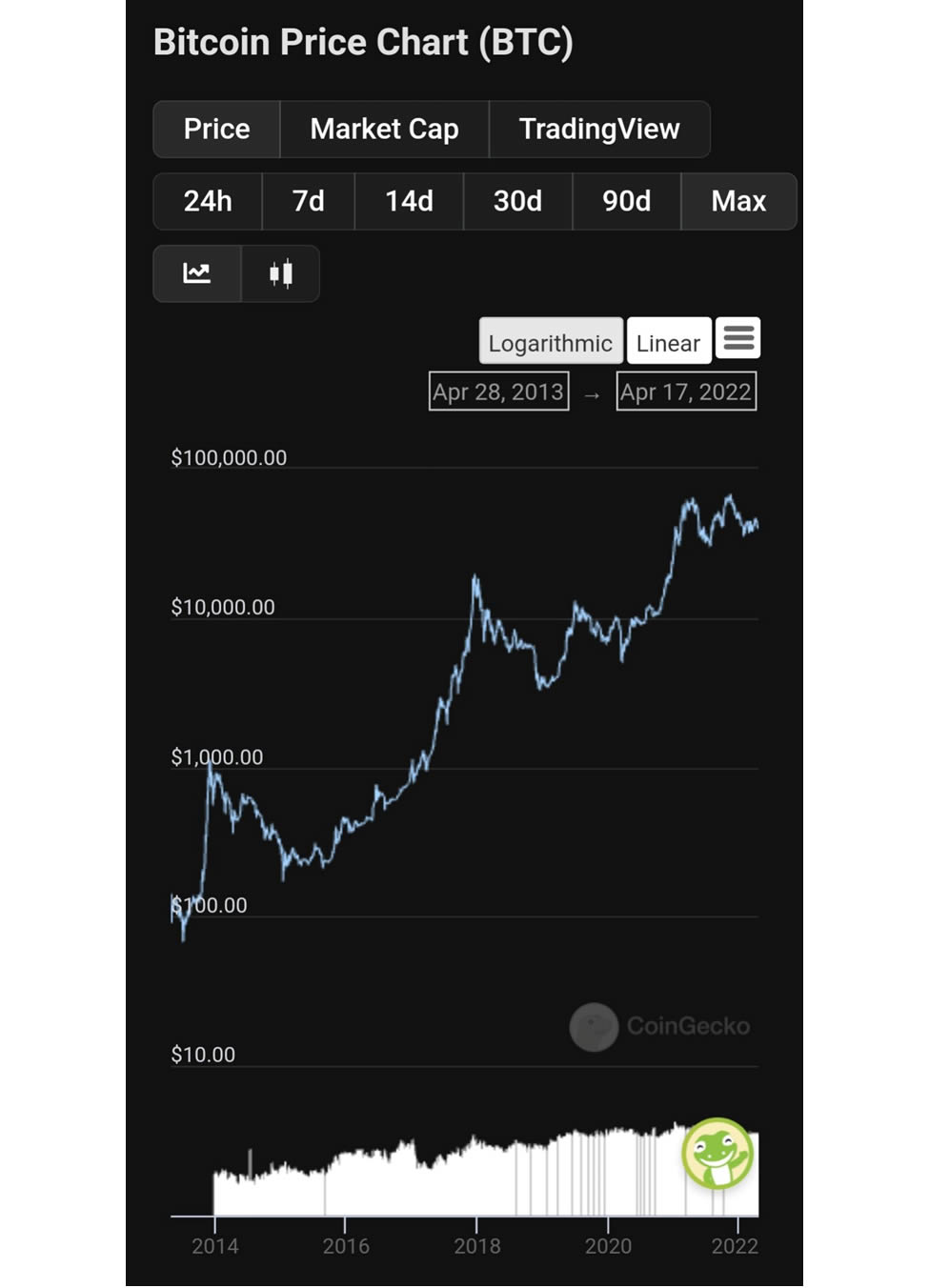 Volatility is only relative to the time spent holding Bitcoin.  As long as it is held long enough, volatility is a major advantage in Bitcoin.  Also, Bitcoin incentivizes energy innovation.  Energy is required for Bitcoin to be mined.  Therefore, it incentivizes using waste energy, renewable energy.  As Bitcoin climbs out of the bear market of 2022, this will incentivize more innovation, research, and commercialization: 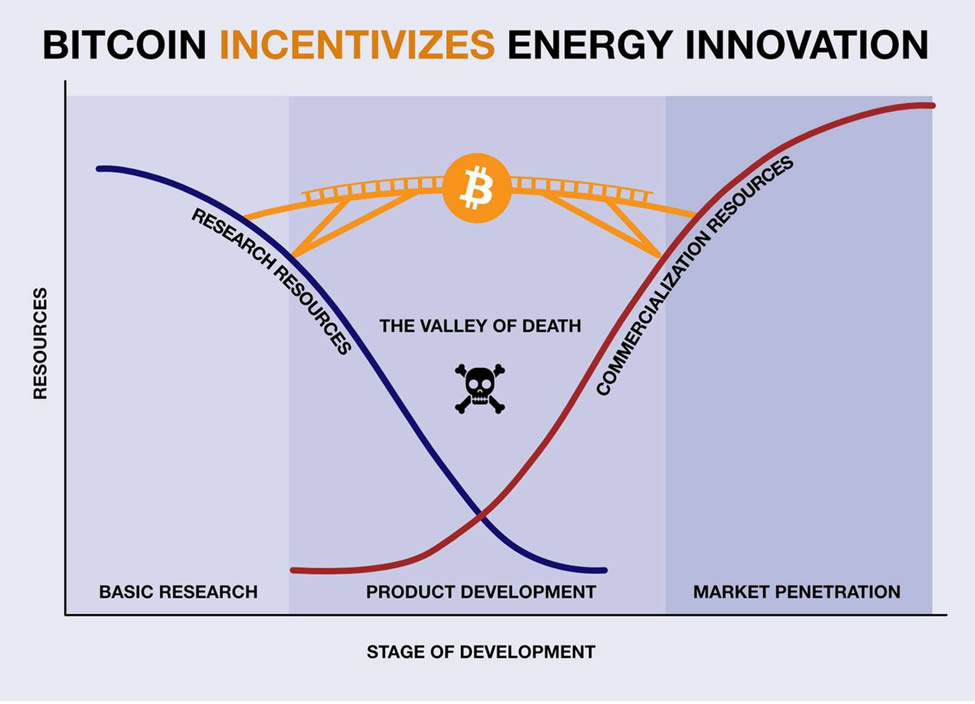 The signs are everywhere.  CBDC will be a disaster for mankind.  Bitcoin is the anecdote to slavery and dependency!  Bitcoin is freedom.  We are not financial advisors and this is not financial advise.  Digital money that is decentralized, and cannot be hacked (blockchain is the most secure computer network in the world).  That is freedom, by it’s very nature.  One has to learn how to safely store Bitcoin offline.  Trezor.io and unchained.com are two resources for accomplishing that.  Do not let your currency be debased another day!  Buy and hold Bitcoin longterm and ride out the volatility.  No matter your age!