Bitcoin Aiming for the Double Top!

Today, we will discuss Bitcoin TA.  We need to see Bitcoin stay above about $46.5K for the next 5 days in order to have the next two day candles close outside of the gaussian channel.  We broke into this 95 days ago, right after the ATH of $64,829.  Now, in order for Bitcoin to break out of this channel, it has to stay close to $50K until Friday.  We will see if this happens.  Of course we hope it does.  We have to be patient and wait to see how it unfolds.  The next chart shows that each pull back, during the supply shock induced bull run, is followed by a run up to the 71.8 fibbonachi level.  For 2021, that would be $220K in late 2021.  Here is the chart below: 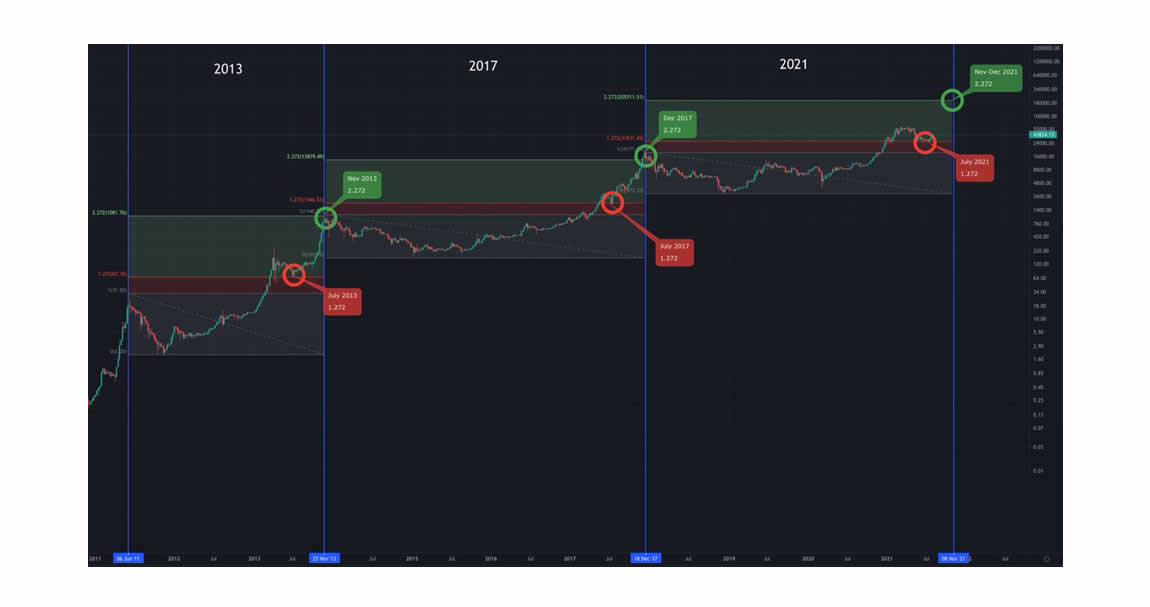 The next chart shows Bitcoin on chain accumulation trends.  Lately, stablecoins have been flowing onto exchanges, presumably to convert to Bitcoin.  Stablecoin accumulation has previously led to bull runs in price action.  This chart below is color coded and as Bitcoin accumulation grows it turns red.  The dark orange is right before the red dots on this chart: 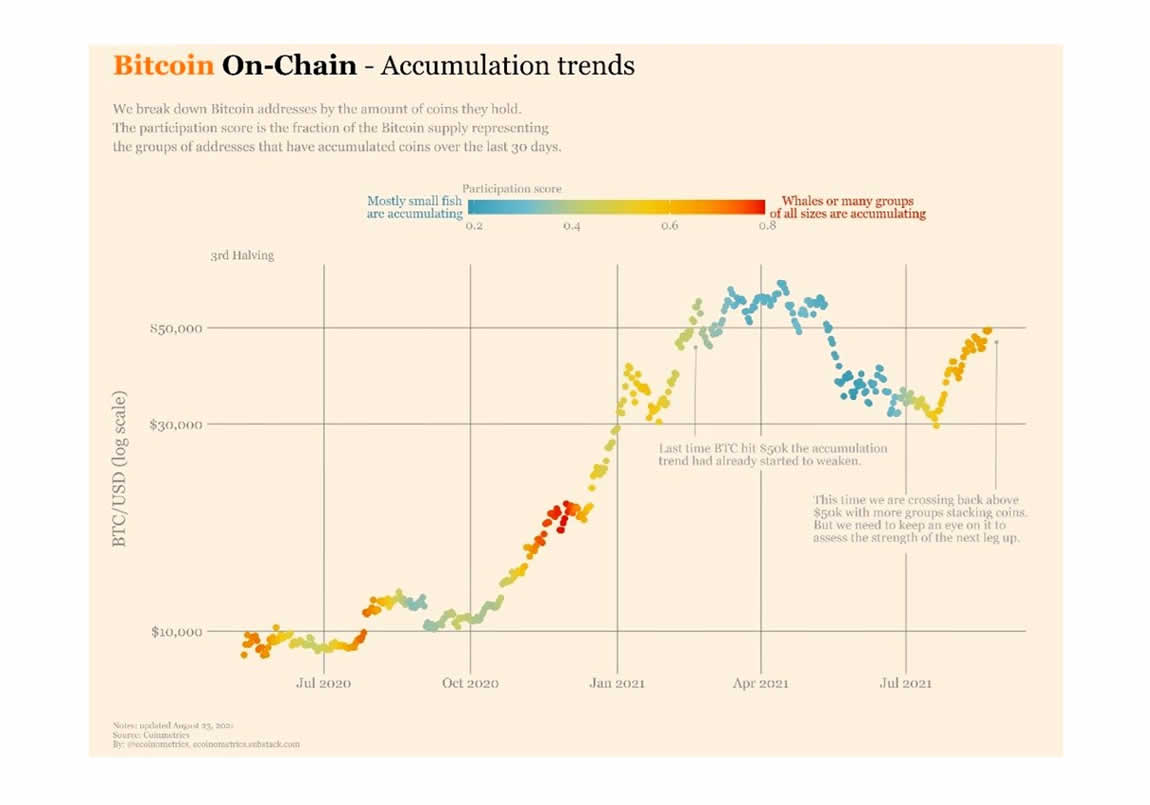 Back last month, we wrote about the hash rate recovery after the China Mining Ban two months ago or so.  Well, at this point, Bitcoin has crossed 150eh/second.  On the chart, the hash rate recover is more than halfway, if not three quarters to the pre mining ban level.  Perhaps in September, when Bitcoin hash rate has recovered close to 100%.  This will give the RSI (relative strength index) time to get well above 20.  That will act as a springboard for Bitcoin to bounce from.  Watch the stochastic RSI on glass node.  That is a telling chart.  Below is the hash rate chart: 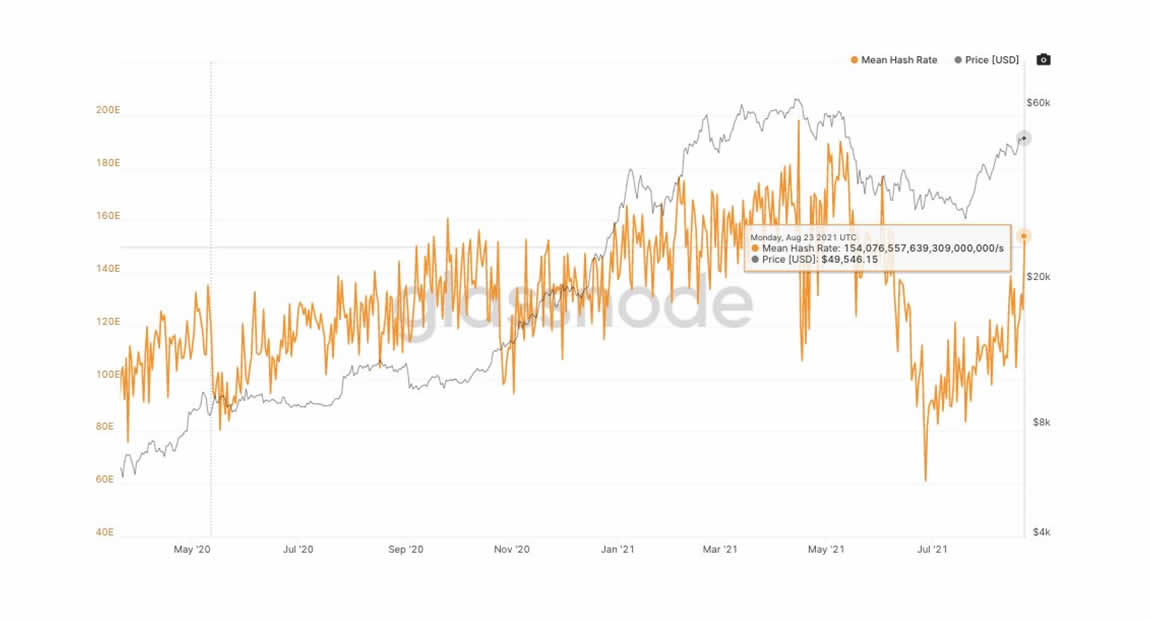 This next chart shows the stochastic RSI and the bullish cross that happened about 14 days ago.  Bitcoin has been ripping up, since then: 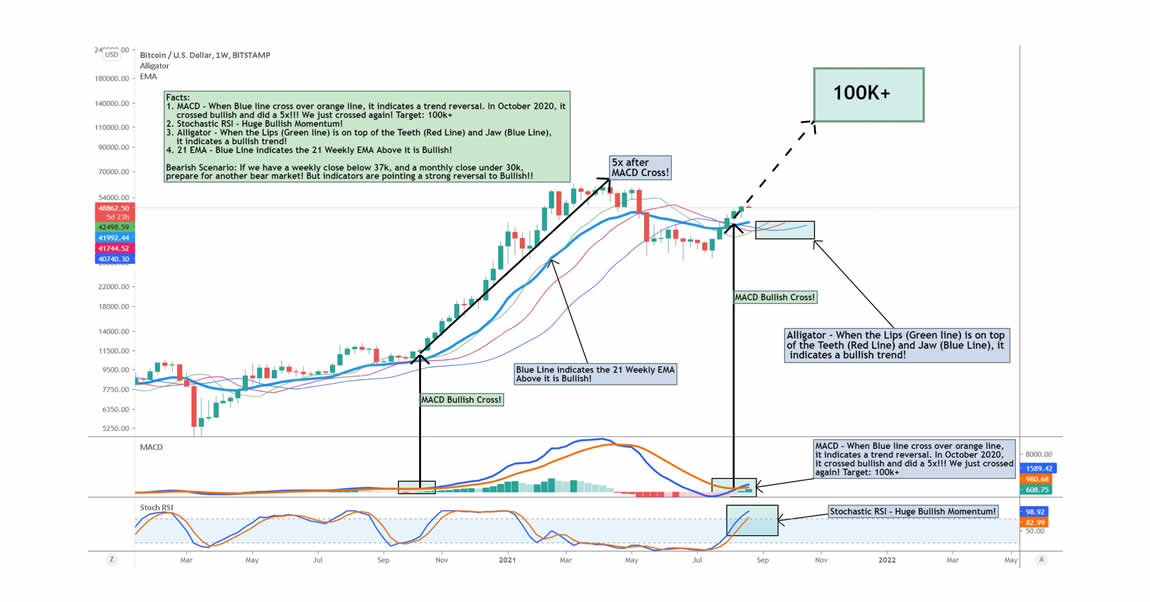 This week will be important.  Bitcoin must stay above the gausian channel which acts as “quicksand” for Bitcoin.  If by Friday, Bitcoin is still above $46.5K it is likely Bitcoin will turn more bullish in the next week or two.  September through November/December will be very interesting.  It is too soon to think about how long this bull run will last.  Enjoy the ride, keep stacking Bitcoin!