There are a lot of ashes to rise from.  This blog will have two halves.  One half good news, one half bad news.  The US has a major threat in the supply chain shut down going on.  So far, one month leadtimes are the norm for cargo ships waiting to offload.  In the recent past, one day or less leadtimes were average.  Now cargo ship leadtimes are 30 times that!  This will kick off mass inflation and hyperinflation.  Below is a picture that shows what the problem really is, the scale of it: 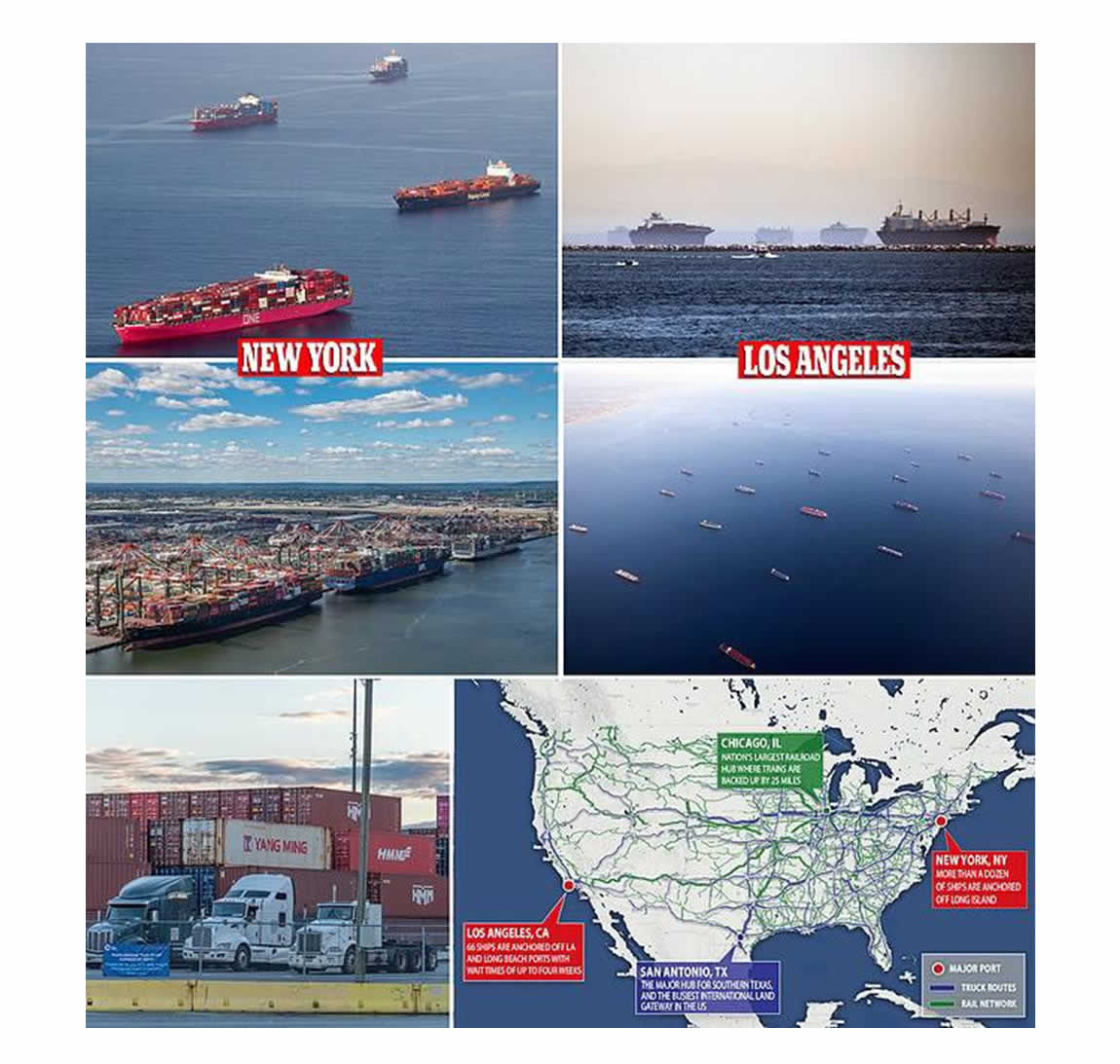 The lack of cargo ship berths to offload ships, which has never been a problem before, are now being cut off.  The ripple effect of supply chain interruption will be felt in stock markets.  It is already being felt in retail: 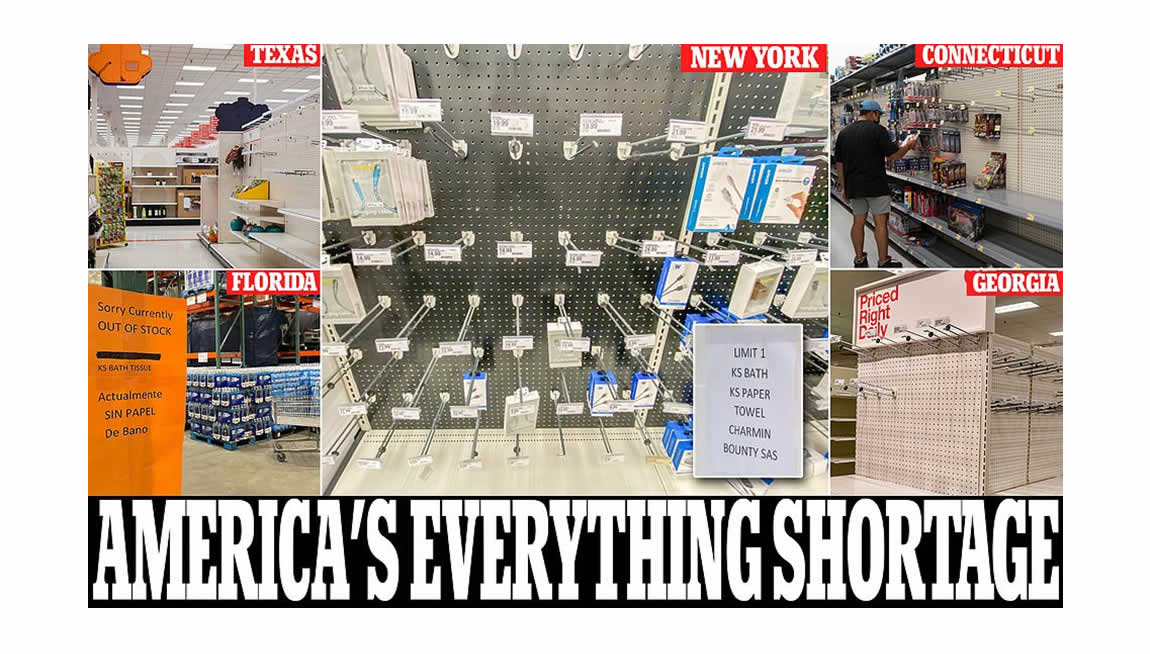 This will affect food, supplies, raw materials and eventually stock market prices.  Inflation, by CPI standards is up big over the last 12 months as this next chart proves: 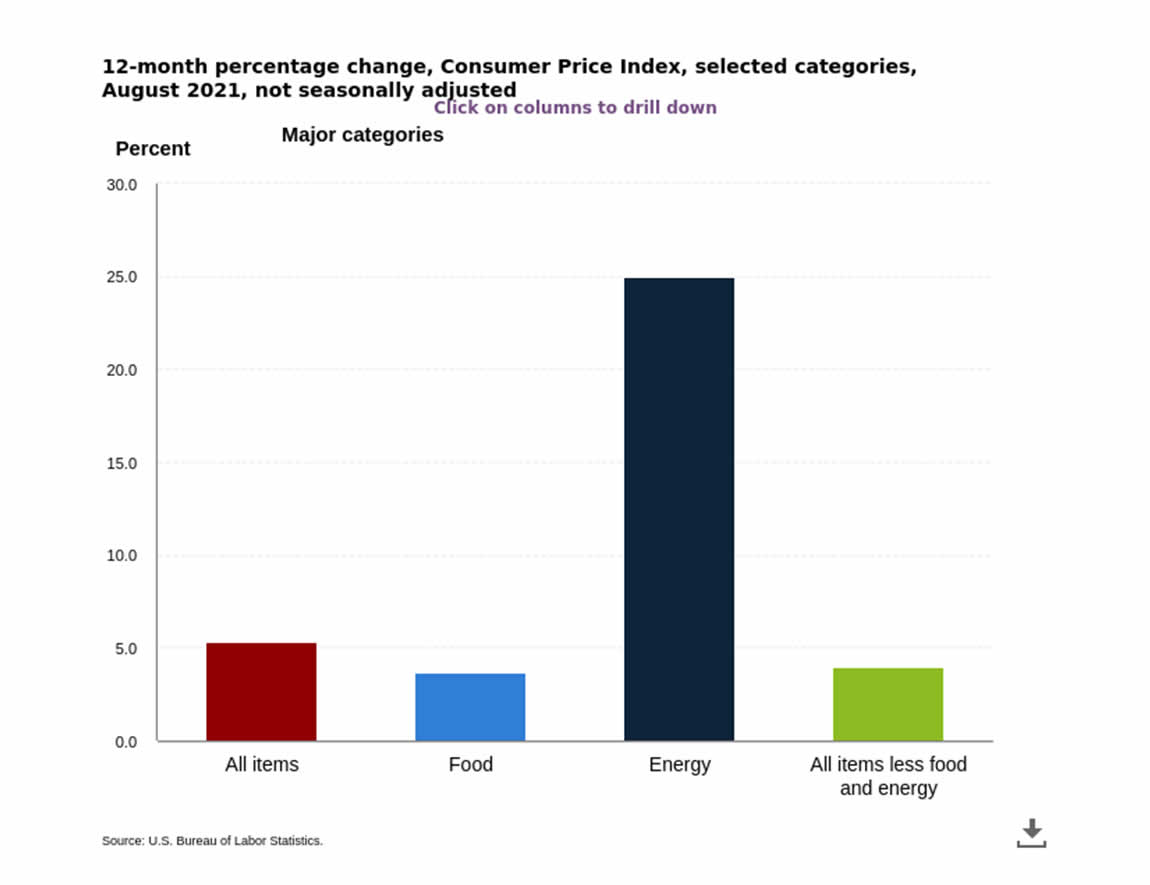 Neutral ATM expects food inflation to rise faster along with energy prices.  The supply chain shortage is catalyst to make this problem worse in late 2021.
Inflation and the monetary devaluation have combined to worsen wealth inequality, enriching the upper 1%, while those who cannot afford appretiating assets are losing wealth: 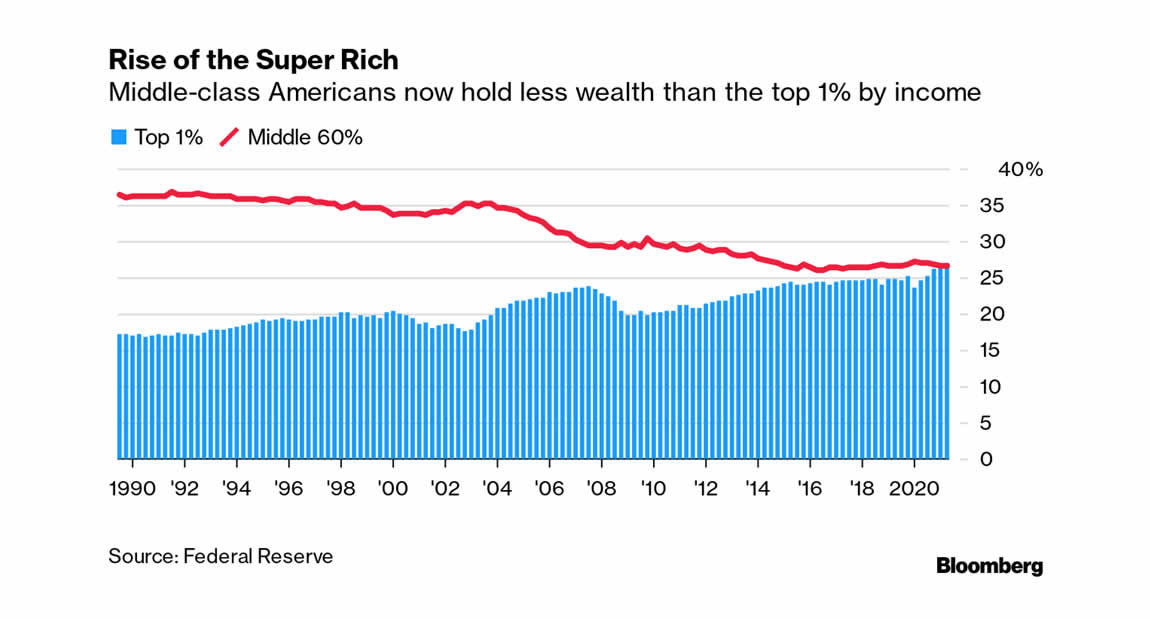 Real Estate is not immune from this either:

1 in 6 home sales in America went to an investor in Q2 2021.  When money is printed, financial institutions get it first.  They use real estate to store it's value (use it as money) - high prices reflect its value.
Bill Miller, a highly successful institutional investor has invested heavily in Bitcoin and touts it as a better investment than his Amazon investment over 20 years ago.  Now that so many institutional investors have used Bitcoin as a hedge against this beforementioned inflation, plus banks, hedge fund managers, and nation states.  It is ready to make the next leg up in the bull run, click here to read.

Below is a zoomed out chart showing the 20 day exponential moving average, white line on the chart.  Bitcoin was below it for 4 months, recently tested it as support, and now it’s taking off: 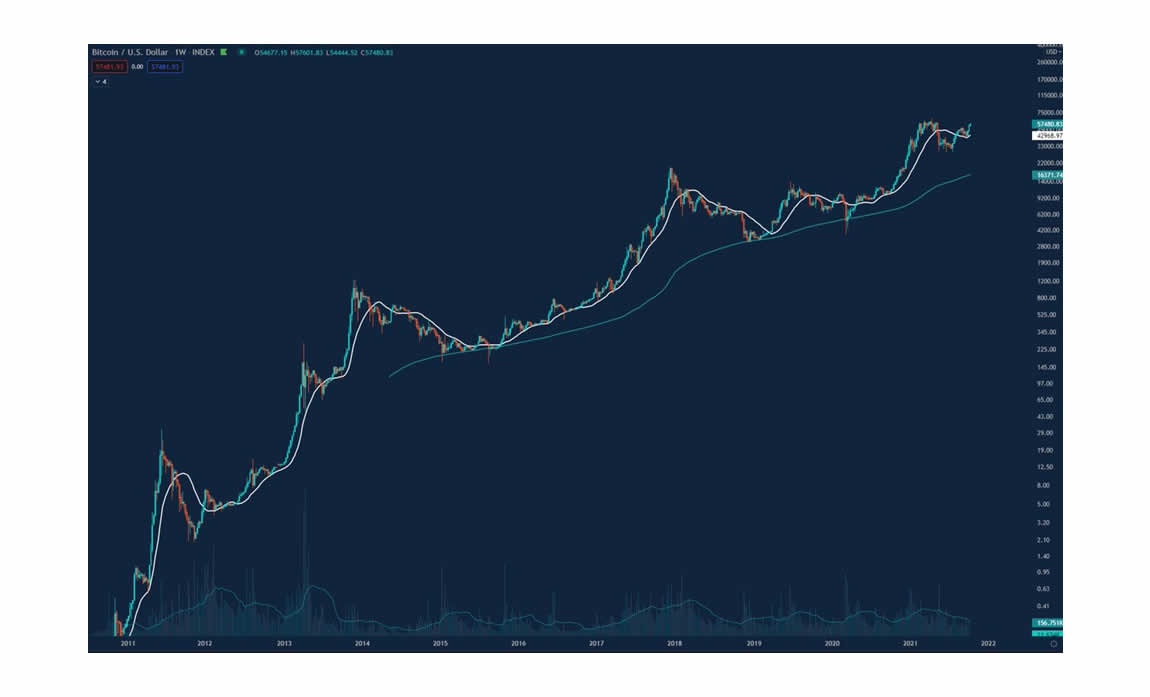 The stock to flow chart is another great reference for where Bitcoin is in the bull run: 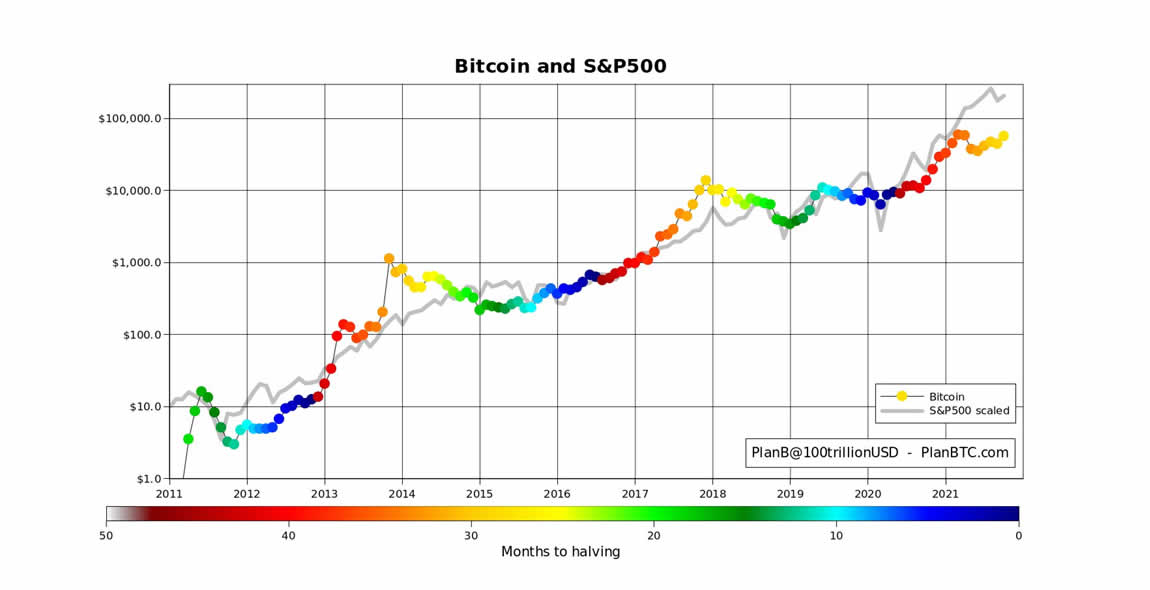 The potential for Bitcoin to run away from all price predictions is there.  Ours is still $160K to $220K, but all bets are off once Bitcoin passes the all time high this month!  Bitcoin is up 30% in October and today is the 11th!  In 2013, Bitcoin rose up 100X, droped down by 68%, then rose up 13X!  In Bitcoin history does’nt repeat but it does rhyme.  We expect easily 6X to over 10X from the mid cycle low of $29K in 2021.  Supply demand shock is real.  Plus, the worse inflation is, the more demand will be for a scarce hard asset, that is digital, and most importantly, secure.  Gold is a hard asset, but it lacks the scarcity and fungibility of Bitcoin.  Offline wallets make it possible to safely store Bitcoin even during a power outage.  No one entity has any control over Bitcoin.  Every miner or node operator controls Bitcoin and there are millions of them globally.  No Government can shut down Bitcoin, see how many times China has tried to.  Therefore, from the ashes of Covid lockdowns, supply chain destruction, an open border, comes a scarce, digital, permissionless, secure asset that is a real store of value.  Gold is also a store of value, however, Bitcoin has proven itself superior to Gold.  The bullish case for Bitcoin could easily hit $300K by January.  We don’t expect that, but it is possible.  Gold will go up, but not like that.  This demonstrates the fungibility of Bitcoin compared to Gold: 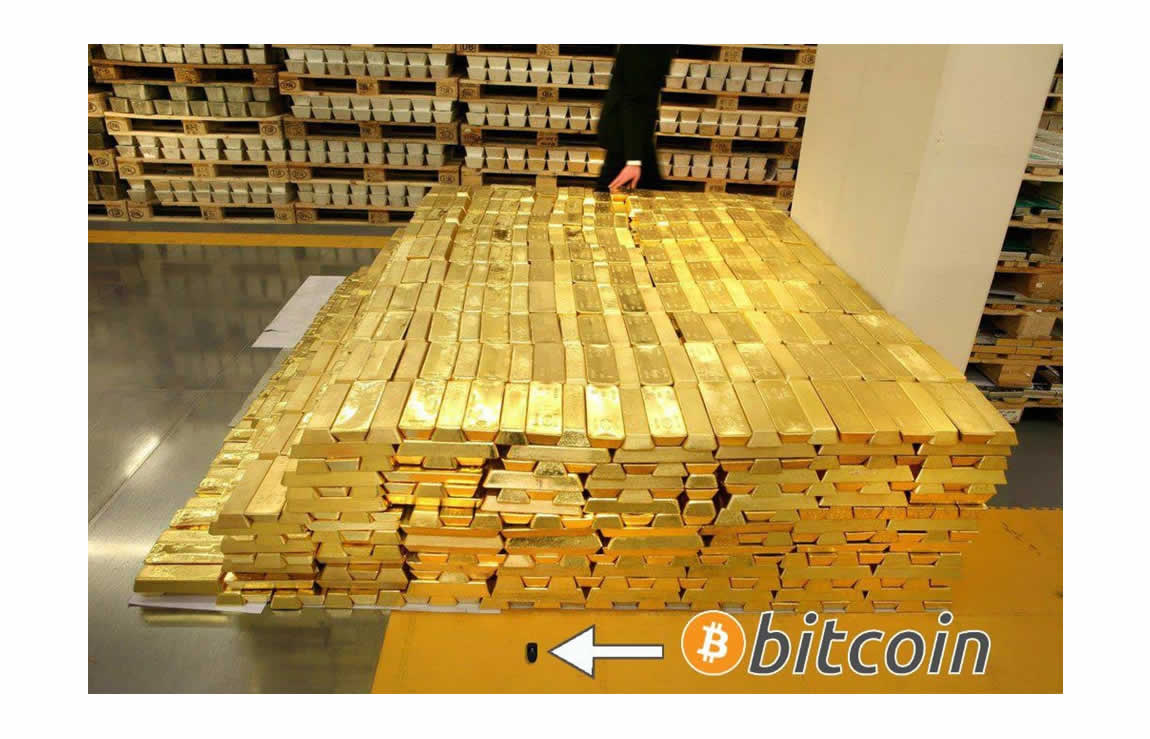 This demonstrates the difference comparing Gold to Bitcoin, priced in M2 money supply: 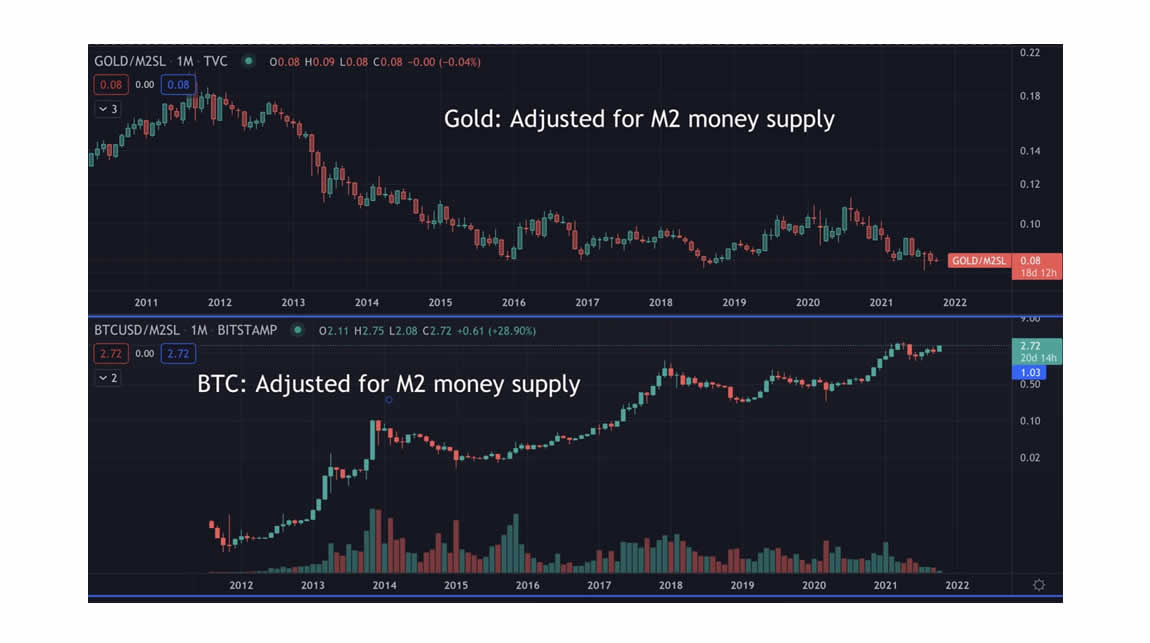 Bitcoin is the Phoenix rising from the ashes. Gold, Art, and Real Estate are other options.  Bitcoin has the best returns long term!