We believe, although we are not directly privy to real time data, that JP Morgan, BOA, and Wells Fargo are all having insolvency issues.  Bank withdrawals are being withheld.  We have seen this at two banks we use.  It is much worse in Europe.  This you tube video is Gold and Silver focused, but it is discussing the pending bank runs.  We lean Silver over Gold, but nothing beats the fungibility, scarcity, and decentralization of Bitcoin.  Sure own some Silver or Gold, but make Bitcoin a big part of a portfolio for the sake of it’s scarcity, fungibility, and decentralization.  Here is the video:

Here is more information from Mr. Phil Gibson, regarding Bank reserve’s.  We still see this bank run starting in Europe, hitting our shores here in the US.  That would explain why reverse repo’s have been so high since 2020.  The US is gaining soveignty over the US dollar: 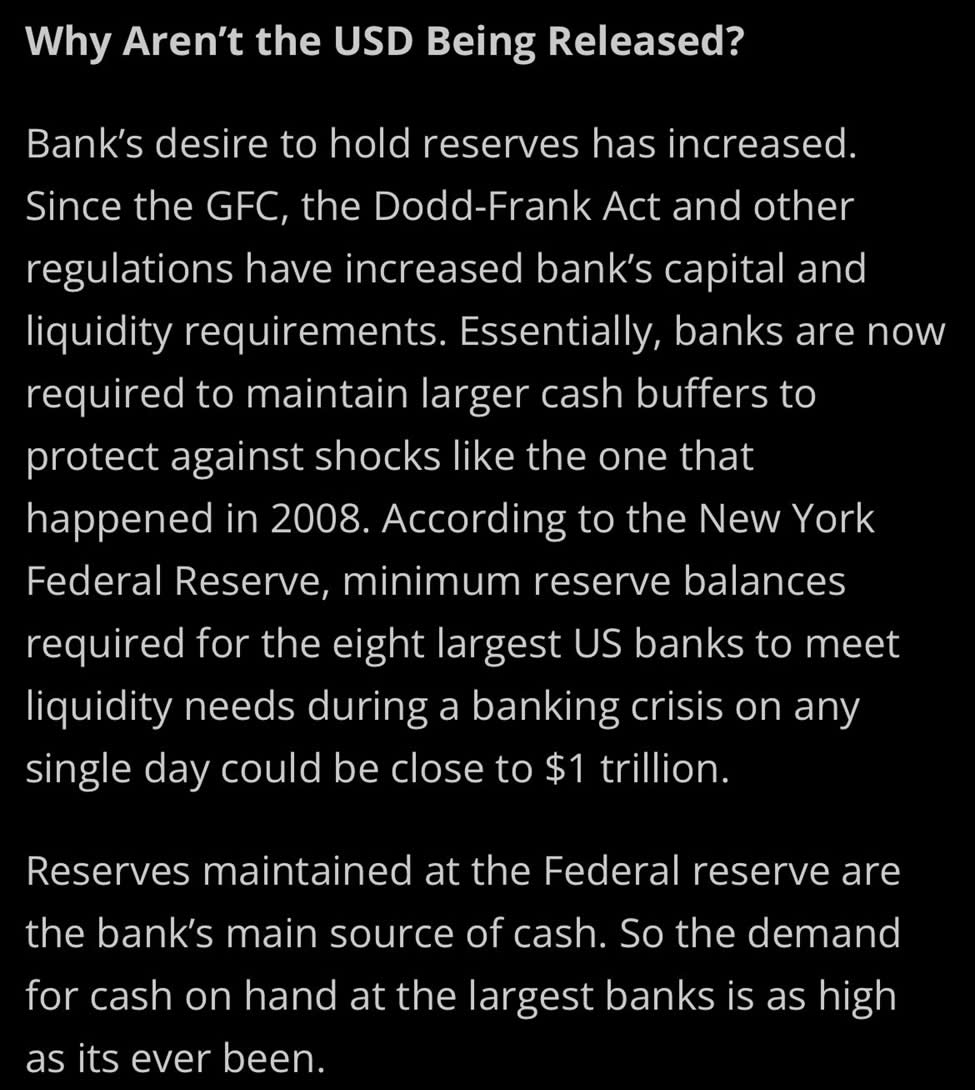 Soveignty over the dollar means getting those dollars from Europe into the US.  Increasing bank reserves.  The Fed knows bank runs are coming!  This next two weeks will be a critical time.  Once bank runs start in earnest, and go mainstream, they will jump borders fast.  This process will be unpleasant.  We are holding back USD, and storing it in case bank bail in’s trend.  A bail in is when the bank confiscates savings in their reserves to bail out there own insolvency.  It’s called a Bail in!  We have seen it in China, Labannon, Iran, Venezuela, Africa.  We expect it in the UK and all over Europe.  It is hard to pin point the timing but this year, and it won’t take long to come to the US!

How would this scenario affect stocks and Bitcoin?  Steve Courtney shows below.  In the first slide, stocks have gove through decade plus accumulation times in 1965 – 1981, and again 2000 – 2009:

There was a previous attempt at a monetary system shift a number of years ago, and that was derailed.  Now, the system is too far gone, the monetary system is in desperate need of a shift, into a new system. The BRICS nations, as we have been mentioning are gaining momentum with a system that would entail a basket of precious metals backing their currencies, and Bitcoin being used for cross border payments.  If this gets traction, and we are pretty certain of it’s inevitable success.  It would supercede CBDC, which is a disaster waiting to happen.  Anything but CBDC.  That currency is 100% centralized and leads nowhere other than to financial slavery.  Bitcoin is here to separate money from state.  It is time to let Bitcoin do what it was made to do.  Gold and Silver have their place.  Bitcoin is the premiere store of value.  We are not financial advisors and this is not financial advise.  The economies of the world are in turmoil and this recession/depression will likely make 2008 look like childs play.  Let’s see how quickly the shift to the new system can take place.  It cannot come soon enough!