Will Gold ever recover?  Bitcoin has truly taken Gold’s thunder away, since the pandemic began last March!  It really began that in 2010.  This past year simply gave Bitcoin the opportunity to prove that to the world.  Yes Gold is manipulated.  Easy to do with physical assets.  Digital assets?  Not so much.  Below is a chart of BTC priced per ounce of Gold:

Obviously, Bitcoin is the chosen hedge over Gold for the past year and two weeks (Covid 19 era).  If and when the USD crashes harder and faster than it is right now.  Will Gold be the chosen hedge over Bitcoin?  We don’t see that happening.  Regardless of how long Gold has been around.  It lacks the scarcity and provability of Bitcoin.  Bitcoin in circulation is regularly proven mathematically.  You cannot do that with the worlds Gold circulation.  You cannot prove the scarcity of Gold as you can Bitcoin.  That is the difference.  Bitcoin is mined digitally, not physically as Gold is.  Gold bugs call that a notch in Gold’s belt.  It is the opposite.  Bitcoin digital provability keeps the Gold hedge extremely subdued!  Thus, we believe Gold will not recover, Bitcoin has won.  Bitcoin will flip the $8trillion Gold market cap.  Plus, by the time Bitcoin does this, Gold’s market cap will be much less anyway!

Neutral ATM still owns some Gold, but we have reduced our Gold holding 85% since last March and all of that went to Bitcoin.

In the below chart, Bitcoin is coming on in the MACD chart again!  It is turning very bullish as April is about to start tomorrow!  Remember, March is historically one of Bitcoin’s worst months of the year.  September is also bad.  Bitcoin was (-8%) last September.  Trends don’t repeat but they do rhyme.  Especially true with Bitcoin.  Since it runs in uniform 4 year cycles (epochs).  Here is the chart:

The above chart is long on time preference.  It does represent that Bitcoin has turned bullish, now that March is ending.  This gives strength to the argument that Bitcoin cycles rhyme, every 4 years.  March is a good month to buy the dip.  So is September!

Now we are about to turn the calendar to April.  Yay!  Bitcoin has performed a 3X over the 2017 ATH.  The current cycle is in white on the chart below.  If Bitcoin performed a new ATH of 17X the previous ATH that would be about a $320K price.  The 2016-2017 bull run is the red line on the below chart.  If, a big if, but if Bitcoin performed a 39X over the previous ATH as the 2012-2013 bull run did.  That would be a price of $700K or so?  Neutral ATM has consistently stayed conservative with a prediction of $160K to $220K.  We have to stay realistic.  Rhyme does not mean the cycles will be identical.  We are watching the 325 day moving average to make sure it does not cross the 200 day moving average early.  That points to a cycle top!  The Bitcoin price needs a good pump in early April to keep that from happening.  We watch the chart, and keep emotion out of the equation.  Here is the new ATH index chart, from ChartsBTC: 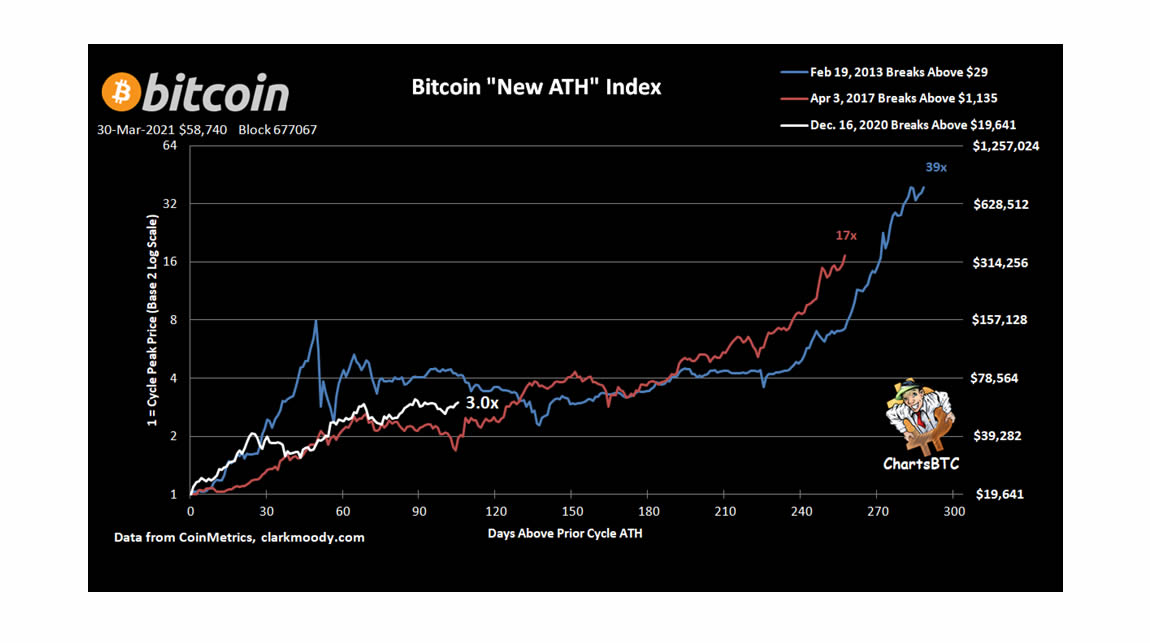 The past two days our blogs have focused on the Fed and money printing.  It appears very obvious that there is no end in sight to the Feds money printing.  They have to, in order to keep the 30 year treasury bond rates from exploding higher, and crashing the stock market, and real estate market.  If the printing continues as it is garaunteed to do, Bitcoin is the proven hedge against central banks worldwide.  It is still volatile.  But think of it as an oak tree in a wind storm.  The top of the tree is moving back and forth, but the roots are deep underground, and the tree will be here in 10 years, 20 years.  Bitcoin’s mathematically, provable, scarcity represents the deep roots holding up the oak tree.  The world is going digital.  Gold is analog, how will you hedge inflation?